Black Cat Bar & Grill, above, has become best known for their pizza. 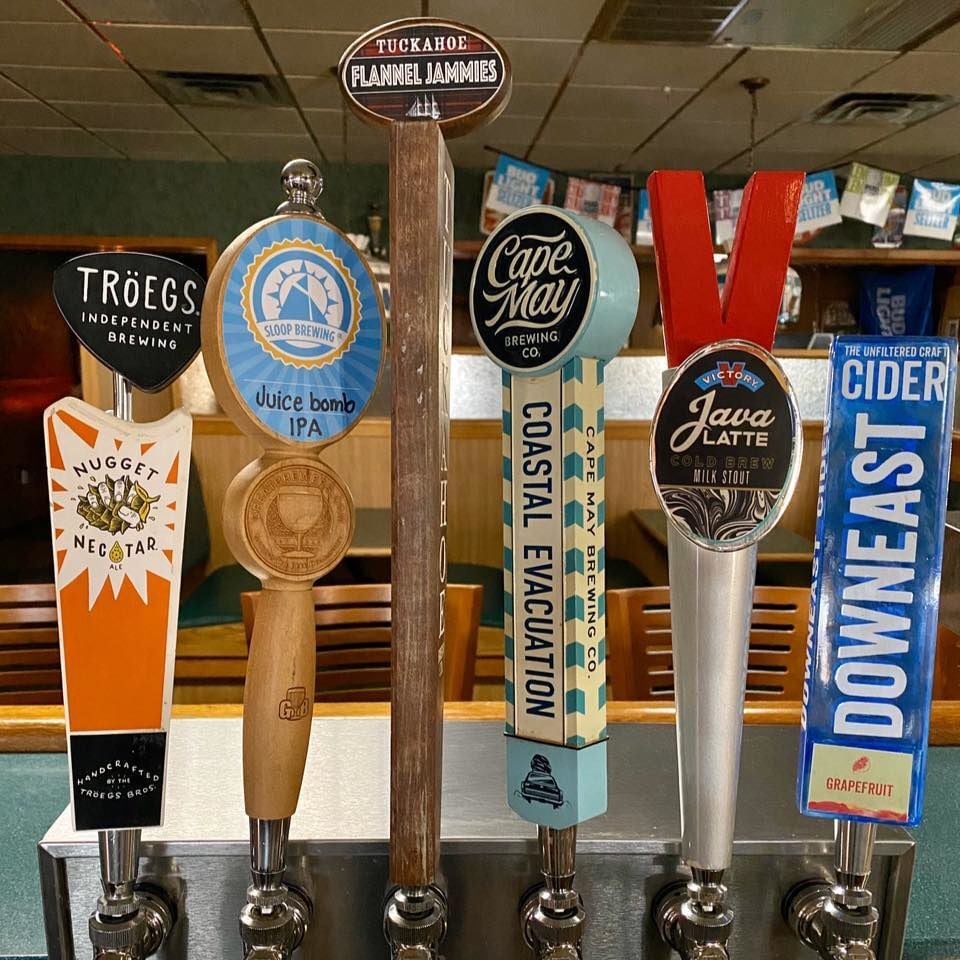 Tilton Inn has plenty of craft beers on tap to quench your thirst.

There’s something about that local watering hole that is just irresistible.

Sometimes, it’s about the food, whether it’s your go-to place for a set of greasy wings or homemade mozzarella sticks.

Sometimes, it’s about the drinks. Maybe they have that hard-to-find beer on tap or that cheap domestic you never stray from, or maybe they make a mean old fashioned or use fresh-squeezed juices in their cocktails?

Here’s five local watering holes that seem like they have always been around … and hopefully always will.

If you live in Somers Point, you have undoubtedly been to DiOrio’s. But if you’re one of the people who just drive by it and wonder what it’s like inside, wonder no more and stop in the next time. A dive bar true and true, DiOrio’s has been around for 60 years and probably doesn’t look that much different from when it opened except for the 11 flat-screen TVs that now offer great sports viewing. If you want to play pool, DiOrio’s is your place. If you’re looking for an array of micro craft beers, this isn’t the place for you. If you’re looking for a cold Miller Lite and awesome wings, then check out DiOrio’s. Our favorite night is Tuesdays, where you can snag 60-cent tenders in an array of sauces — try the scampi and the Cajun crabby along with their original buffalo — while playing Quizzo. They also have 54-cent wing night on Wednesdays, 54-cent clam night on Thursdays, and make sure you snag their spinach and artichoke dip and a cup of their famous clams casino soup. DiOrio’s is located at 10 MacArthur Blvd., Somers Point. Find them on Facebook.

Two bars from Somers Point on the same list? The truth is we could have filled this list with just Somers Point, but Gregory’s certainly belongs on here. Not only has it been around since 1946, but it checks so many boxes for us. First off, the bar side is the definition of a watering hole with its massive wood bar and classic bar look. The newly remodeled dining side is where you go if you’re looking for a little more class and an awesome dinner menu that focuses on seafood. We can usually be found on the bar side devouring cheap tacos on Taco Tuesday, or snagging an $8 burger, which won the inaugural Burger Bash, on Wednesdays for Burger Night with $3 pints of Bud Light. A true family affair — several members of the Gregory family can always be found working there — Gregory’s is all about tradition. Maybe they will bring back seven beers for a buck night!!! But probably not. Gregory’s is located at 900 Shore Road, Somers Point. Go to GregorysRestaurantAndBar.LetsEat.at

Across the street from another legendary spot — the Hi-Point Pub — sits the Black Cat. A liquor store in front and bar/restaurant in the back, it’s the place you may find a group of Stockton students pounding shots, locals drinking cheap Coors Light all day or casino workers downing a nightcap and a bite to eat after their shift. Although the Black Cat has undergone some renovations to really improve the overall aesthetic, it will always be an awesome dive bar no matter how nice it looks. The Black Cat has some stellar food, too, including inexpensive platters like meatloaf and fried chicken, but they have become known for their pizza. A true bar pie, it was named on the Top 10 Critics List in our recent Pizza Palooza issue, and you can snag two large pies for just 20 bucks pretty regularly! The Black Cat is located at 1 N. Shore Road, Absecon. Find them on Facebook.

An institution since 1927, Tony’s is another place that has renovated its interior rather extensively but will never shed its dive bar status. The dining room still has classic ’50s jukeboxes mounted on the walls at its booths, and the last time we were on the bar side, I think there was still a phone booth in there. But that could just be our wishful, nostalgic memory playing games with us. If you never sat at the bar and ordered a bar pie with sausage and meatballs along with a fried shrimp basket and took in the historic ambiance of Tony’s Baltimore Grill, then you really haven’t lived. Take in the neon lights glowing through the windows as a local spins a yarn about the way Atlantic City used to be while slugging a $2 Miller Lite and you know you are in the right place. Tony’s Baltimore Grill is located at 2800 Atlantic Ave., Atlantic City. Go to TonysBaltimoreGrillAC.com.

Walk into the Tilton Inn and don’t be surprised the place looks pretty much exactly the way it used to 25 years ago. And, like the others on this list, that’s part of its charm. Known for its superb tenders, filet mignon sandwich and the Tilton Special steak sandwich, the Tilton Inn has always been a great place for lunch, dinner or late-night eats … and a drink, of course. Unlike many other places on this list, the Tilton has done an awesome job upping the ante when it comes to its beer list, offering a nice assortment of craft beers to go with the domestics. Recently, the Tilton offered brews from Cape May Brewing, Evil Genius, Glasstown and even had Goose Island Bourbon County Stout — a tough beer to find — for the taking. The Tilton Inn is located at 6823 Tilton Road, Egg Harbor Township. Find them on Facebook.

A trip to a bar is usually a good time no matter what, but in the summer when the weather is just perfect and the sun is setting, somehow it j…

Black Cat Bar & Grill, above, has become best known for their pizza.

Tilton Inn has plenty of craft beers on tap to quench your thirst.