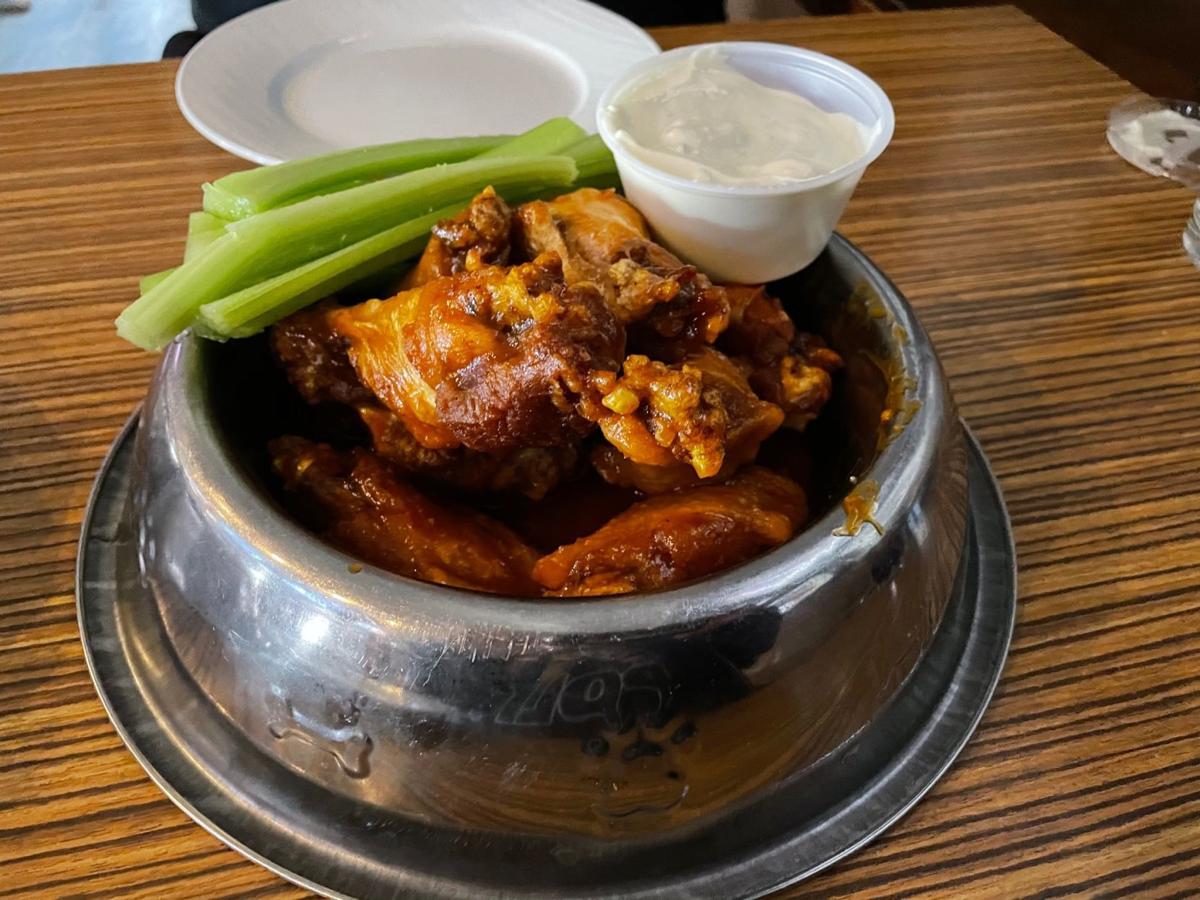 RYAN LOUGHLINThe Spicy Peach wings at Bulldogs were enjoyable but were easily overpowered by the blue cheese. 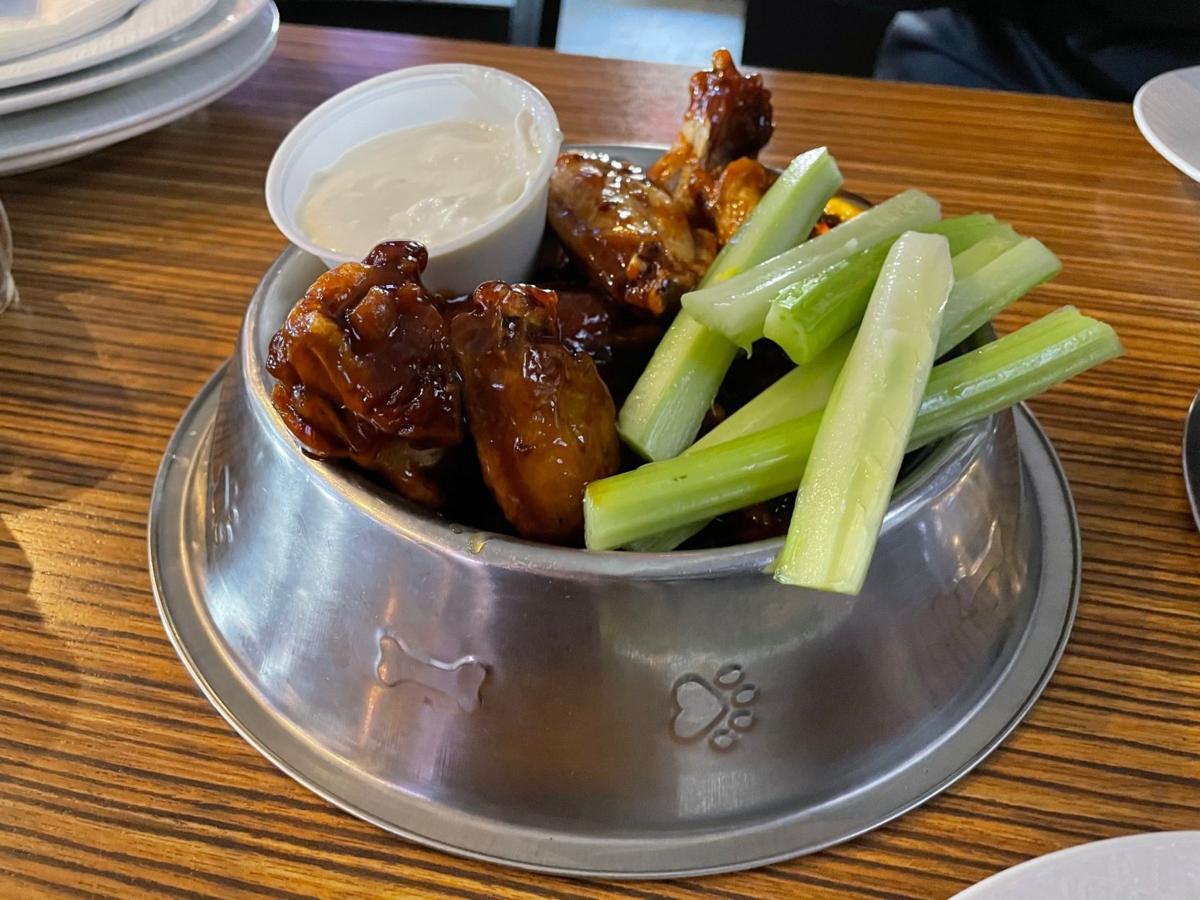 The General Tso’s wings were a hit — sweet and sticky with a touch of heat.

Good buzz about bar pies is what sent me and a few buddies to check out Bulldogs Bar & Grill in Egg Harbor City, but when I had a chance to look over the menu and noticed how many wing varieties they offered, I decided on the spot to make them the focus of my next Wingin’ It column. And here we are.

Bulldogs is a classic, no-frills South Jersey bar, set inside what looks to be an old house. Inside is a square bar room boasting a nice selection of beers and a menu packed with everyone’s favorites, including nachos, loaded fries, burgers, dogs and, of course, wings.

The Wing: Sized somewhere between a medium and a large and served in a metal dog bowl, the wings at Bulldogs were meaty and moist. I probably would have liked them to be a touch crispier, but that’s my own fault for forgetting to tell them to leave them in the fryer a bit longer.

The Sauces: The sheer number of wing sauce options is what made me want to review this spot in the first place. Everything from traditional buffalo flavor to unique rarities like Jerked Honey Rum, General Tso’s and Spicy Peach were on the list, along with a bunch more. I ended up ordering the Spicy Peach out of sheer curiosity, as well as the General Tso’s.

Initially I found it difficult to taste much of the spice or the peach flavor in the Spicy Peach sauce, but I quickly realized that the issue was due to me generously dunking my wing in blue cheese. When I tried one without it, the flavors popped out considerably, with the subtle Georgia sweetness dancing playfully with the spice of the pepper. A bit more heat would have made this combo even more delightful, but it worked overall.

The General Tso’s sauce is an excellent pairing for a wing, as the chicken dish that is the star of every Chinese takeout menu uses chunks of chicken thighs which are dark meat, much like chicken wings. The sauce itself was sweet with a touch of spice and worked considerably better with the blue cheese than the spicy peach variety.

The Dip: The blue cheese comes at an additional cost of 75 cents. I’ve said it before and I will say it again — restaurant owners should know better than to pull this move. Doing so makes the owner look like a cheapskate, hellbent on finding ways to nickel and dime the customers. Just build the cost into the price of the wings if you must, but charging for condiments is just lame. That aside, the blue cheese was excellent, packed with large chunks of cheese and loaded with great flavor, it gets a solid thumbs up.

The Sides: Another 75-cent upcharge for celery. You can imagine how I feel about this. But they do provide you with a generous portion, and the stalks are large and perfect for dipping, so that’s a plus.

The Value: Ten wings for $9. Anything under a buck per wing is tough to find nowadays, so these are a pretty solid deal in my book. Then again, once you tack on $1.50 for the sides that should come with it, you are back over $10, so there’s that.

The Bottom Line: I was happy with my wings. The Spicy Peach sauce added a tangy twist to the normal buffalo experience, but you would do best to eat them on their own and restrict any blue cheese dunking for celery only. The General Tso’s sauce lived up to its expectations and was not overpowered by any dipping. Overall Bulldogs proved to be worth the trip.

When Anthony and Nick DellaVecchia opened Tony Beef in Galloway Township three years ago, it was obvious the brothers had a vision beyond thei…

Wingin’ It … at The Cove

Brigantine is a quirky place. Though it’s right next door to Atlantic City geographically, once you cross over the bridge it feels like you’ve…

It’s Pizza Palooza! - Critics and readers decide once and for all who makes the best pizza in South Jersey

5 places to grab an empanada and a cold one

With Easter behind us and no other major holidays coming up for the rest of the month, you may be searching for a reason to celebrate. Fear no…

I really thought the seltzer craze would lose its fizz, but people are enjoying them and with warm weather arriving, they are selling more tha…

RYAN LOUGHLINThe Spicy Peach wings at Bulldogs were enjoyable but were easily overpowered by the blue cheese.

The General Tso’s wings were a hit — sweet and sticky with a touch of heat.