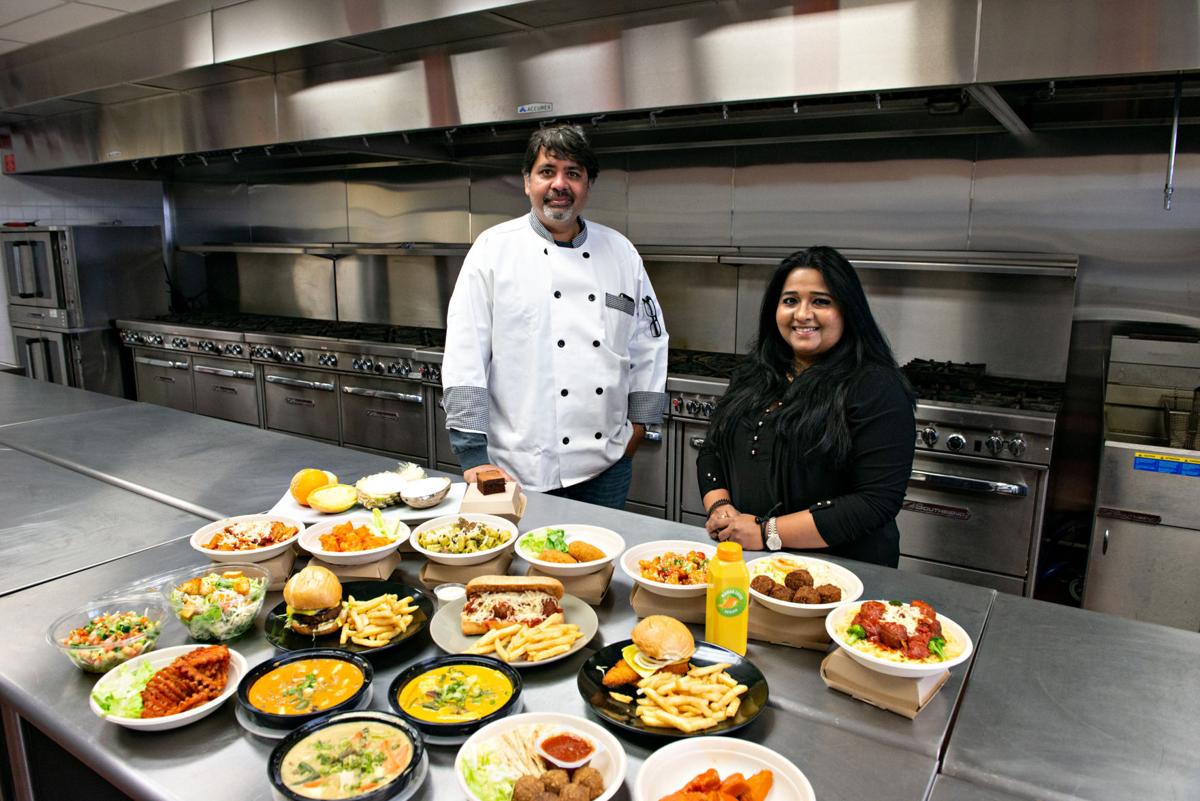 Owners Ansari Ahamed and Sabitha Vis are the masterminds behind the Vegan 15 concept. 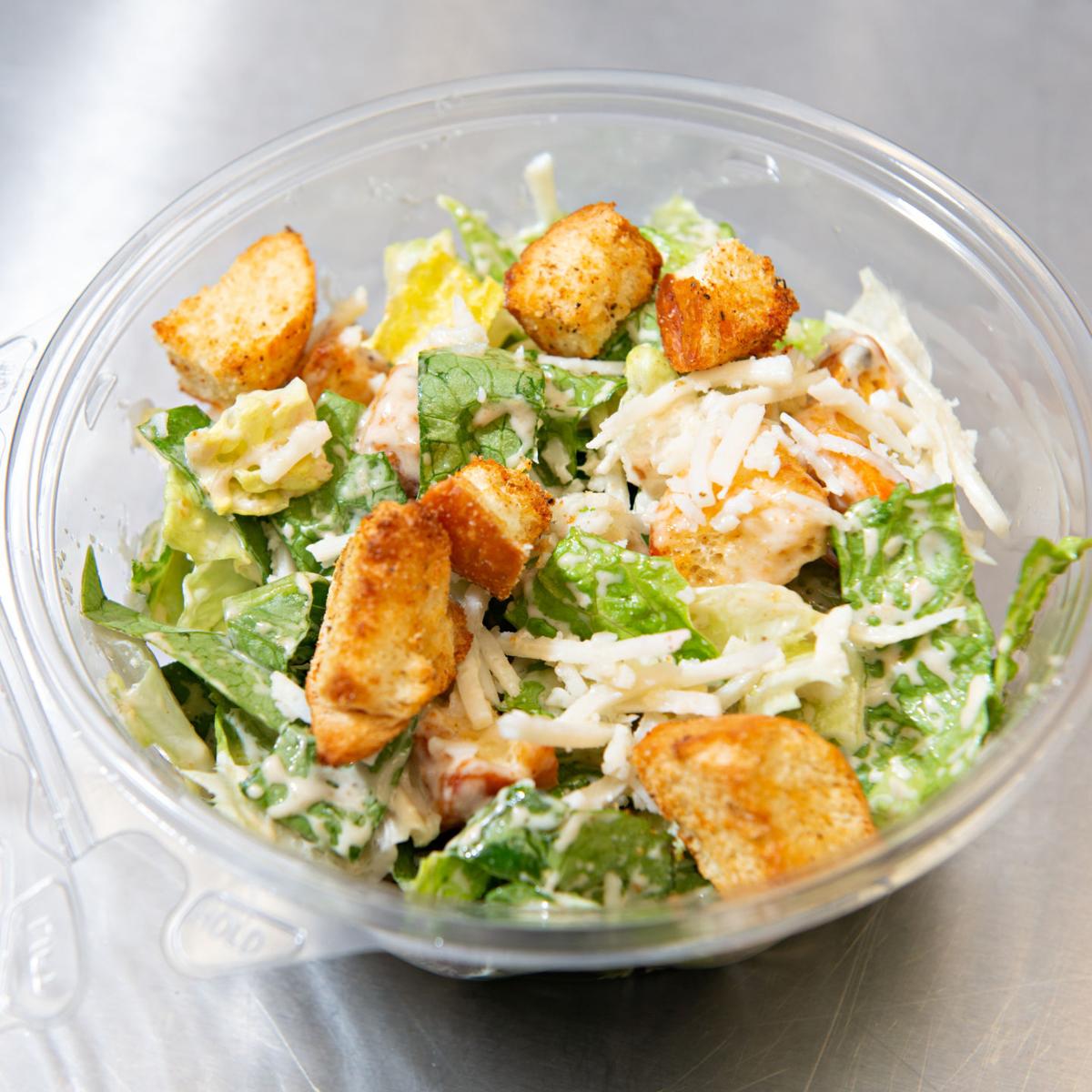 The vegan Caesar salad serves as a great starter to your internet restaurant experience. 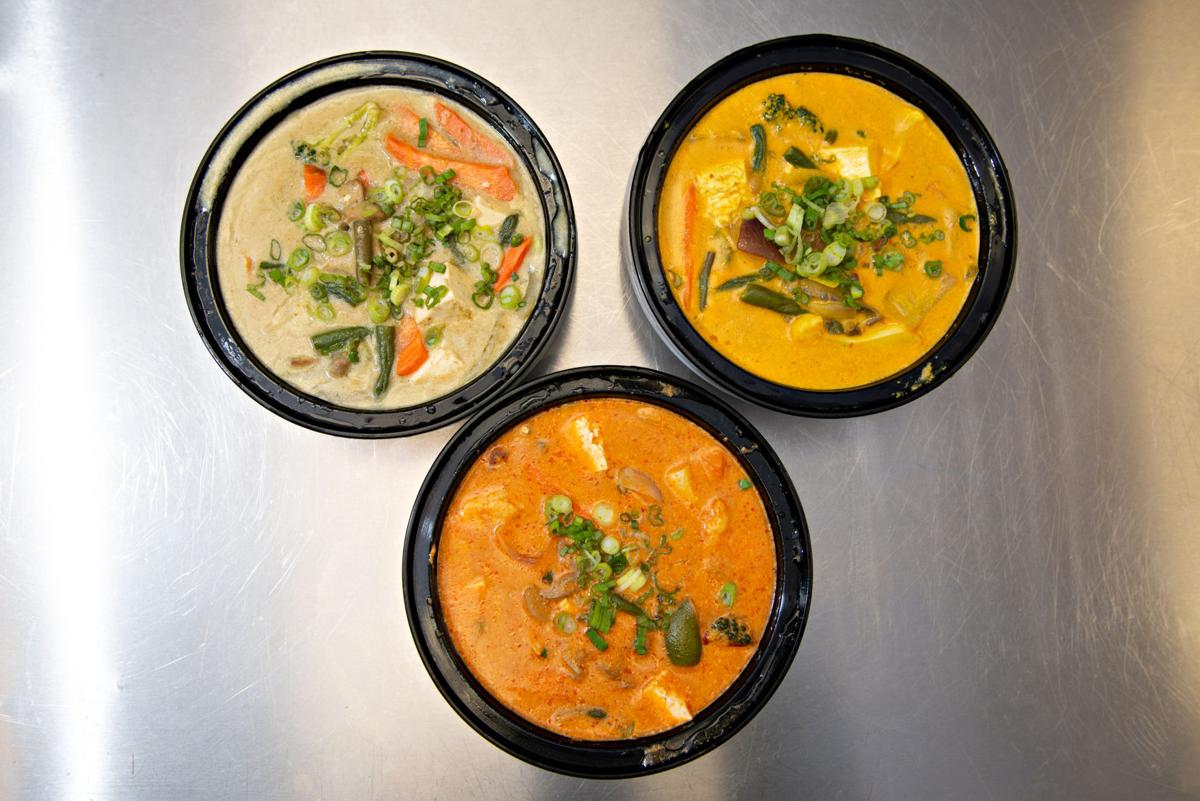 Red, green and yellow Thai curries are some of the more exotic options available on the Vegan 15 menu. 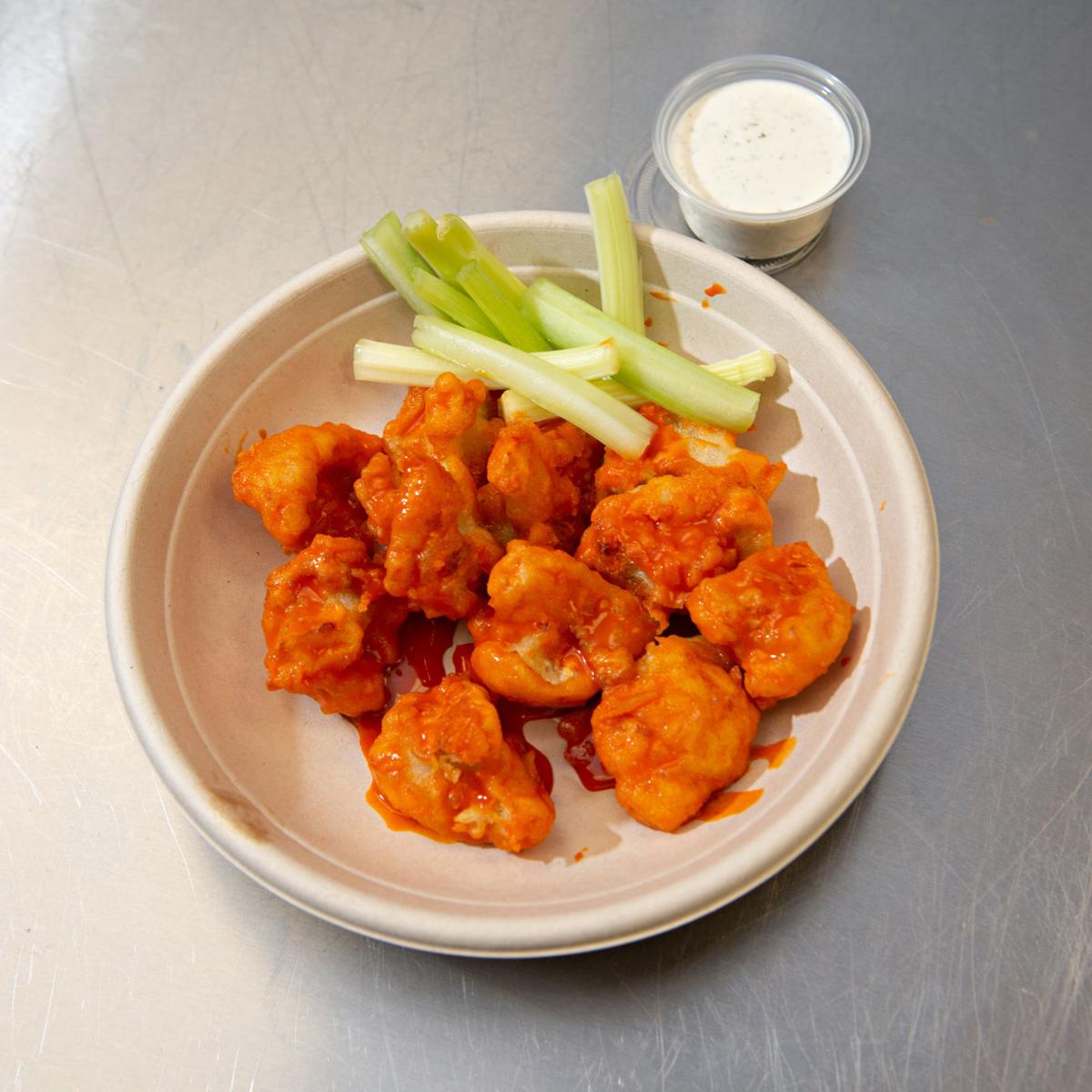 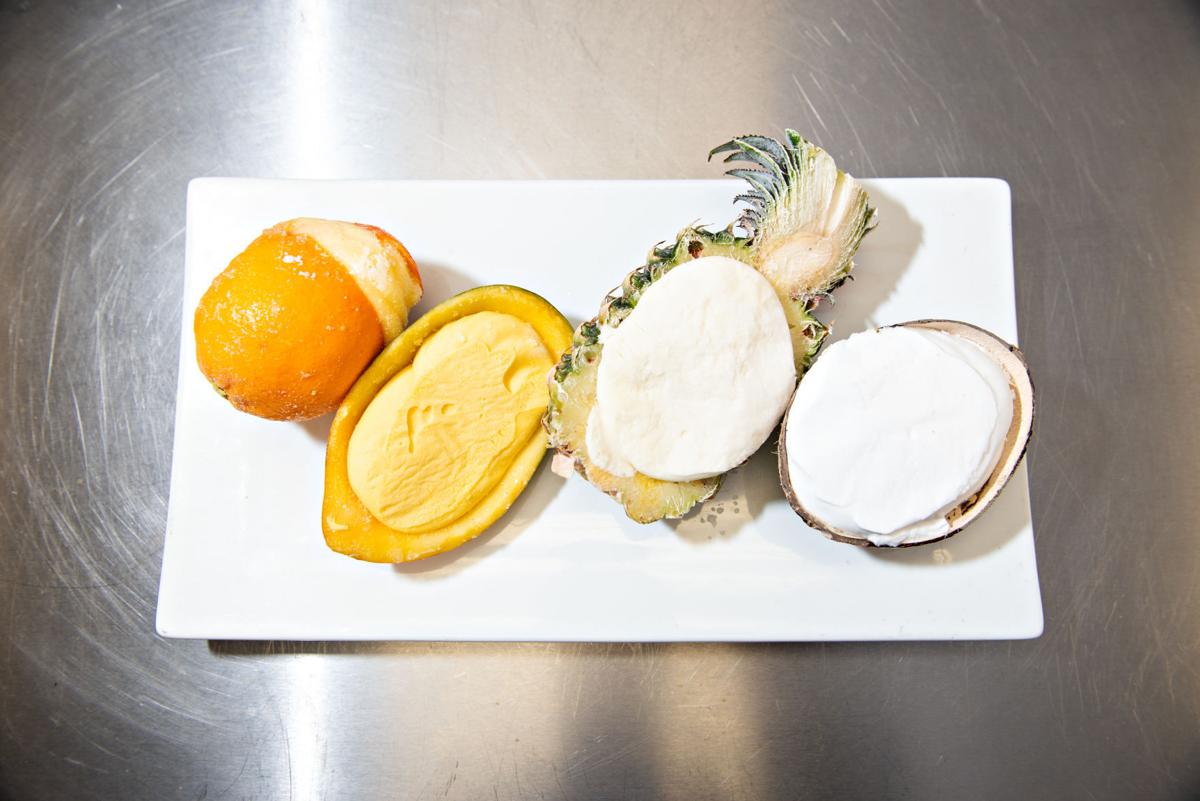 Don’t skip the dessert — a fruit sorbet can make your day. 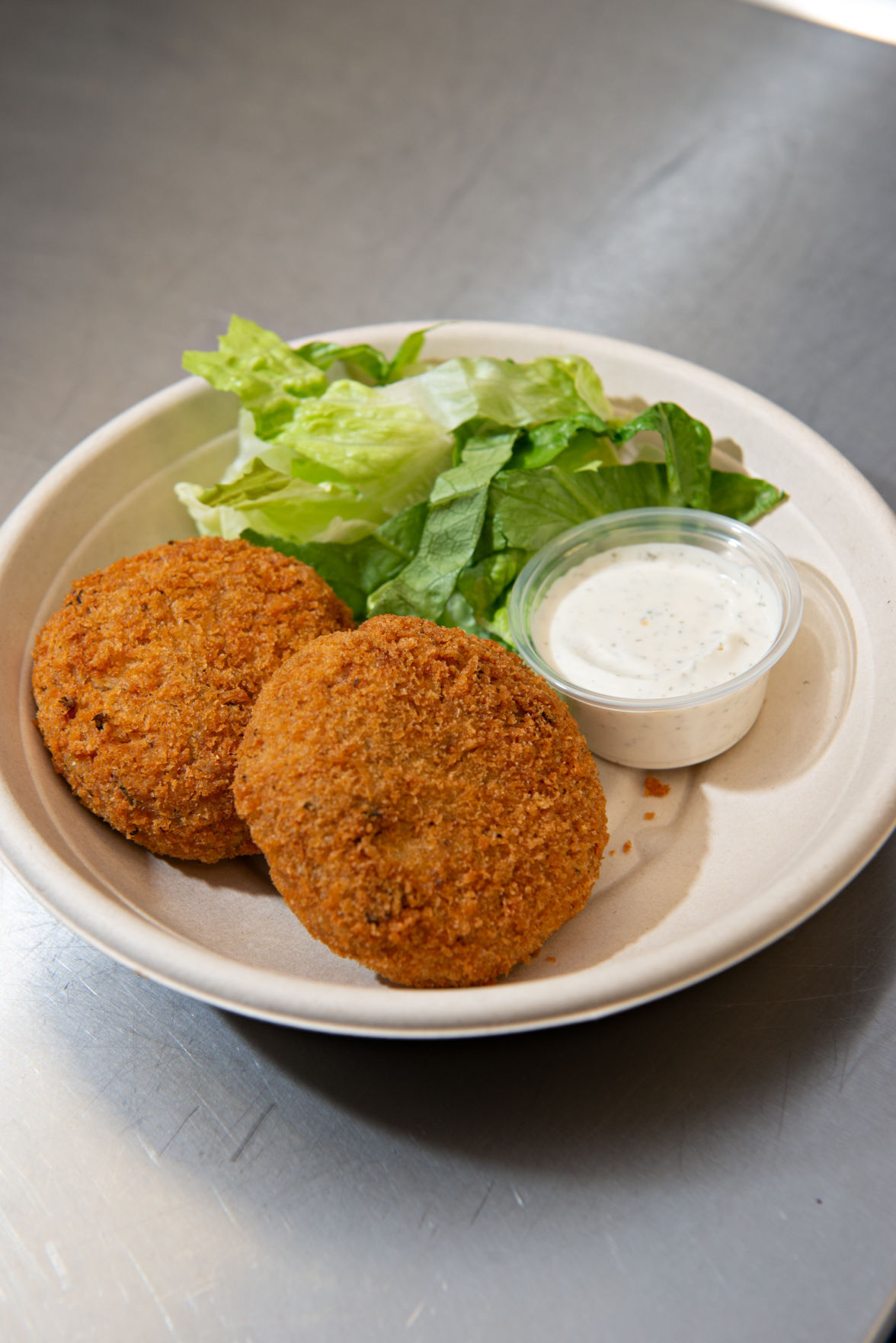 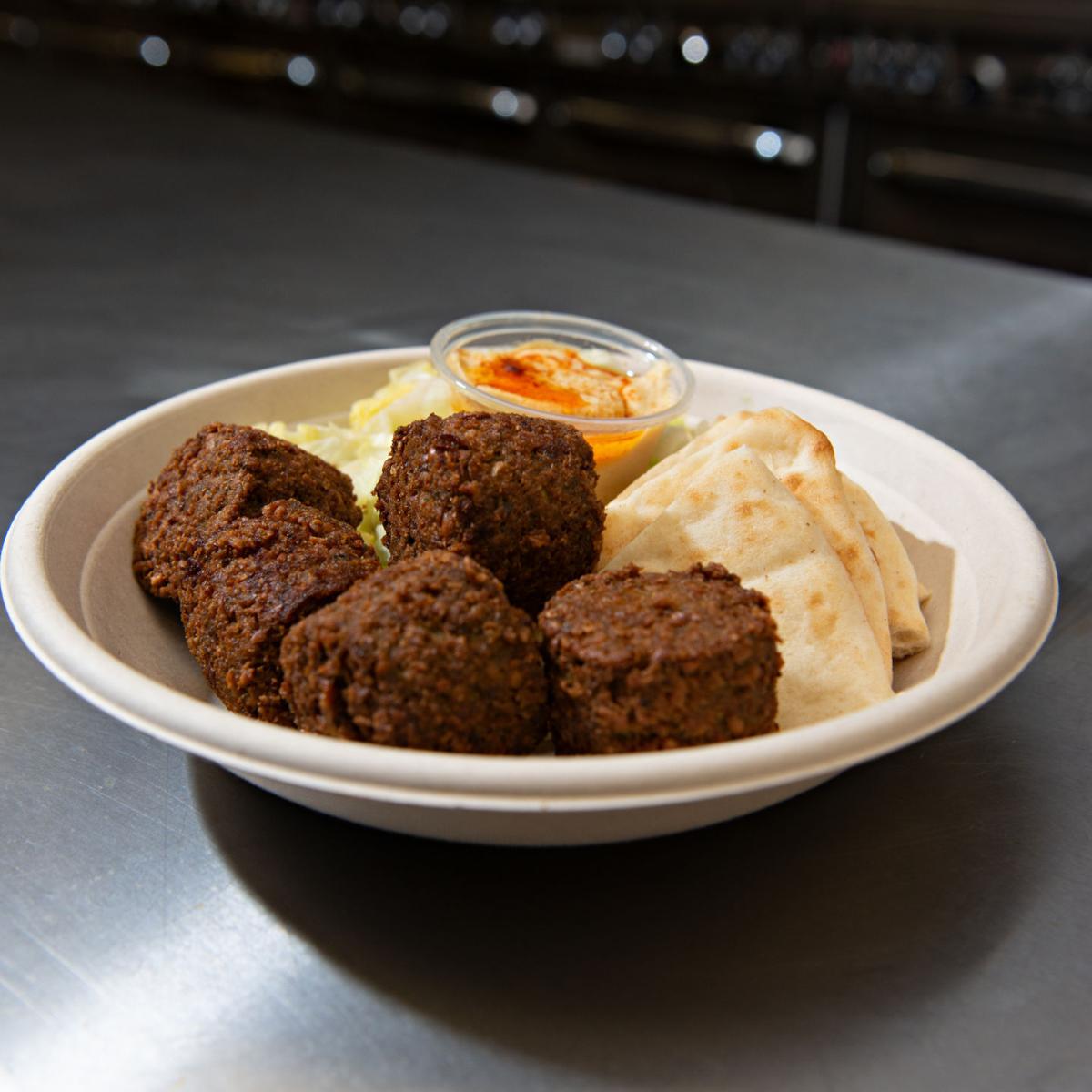 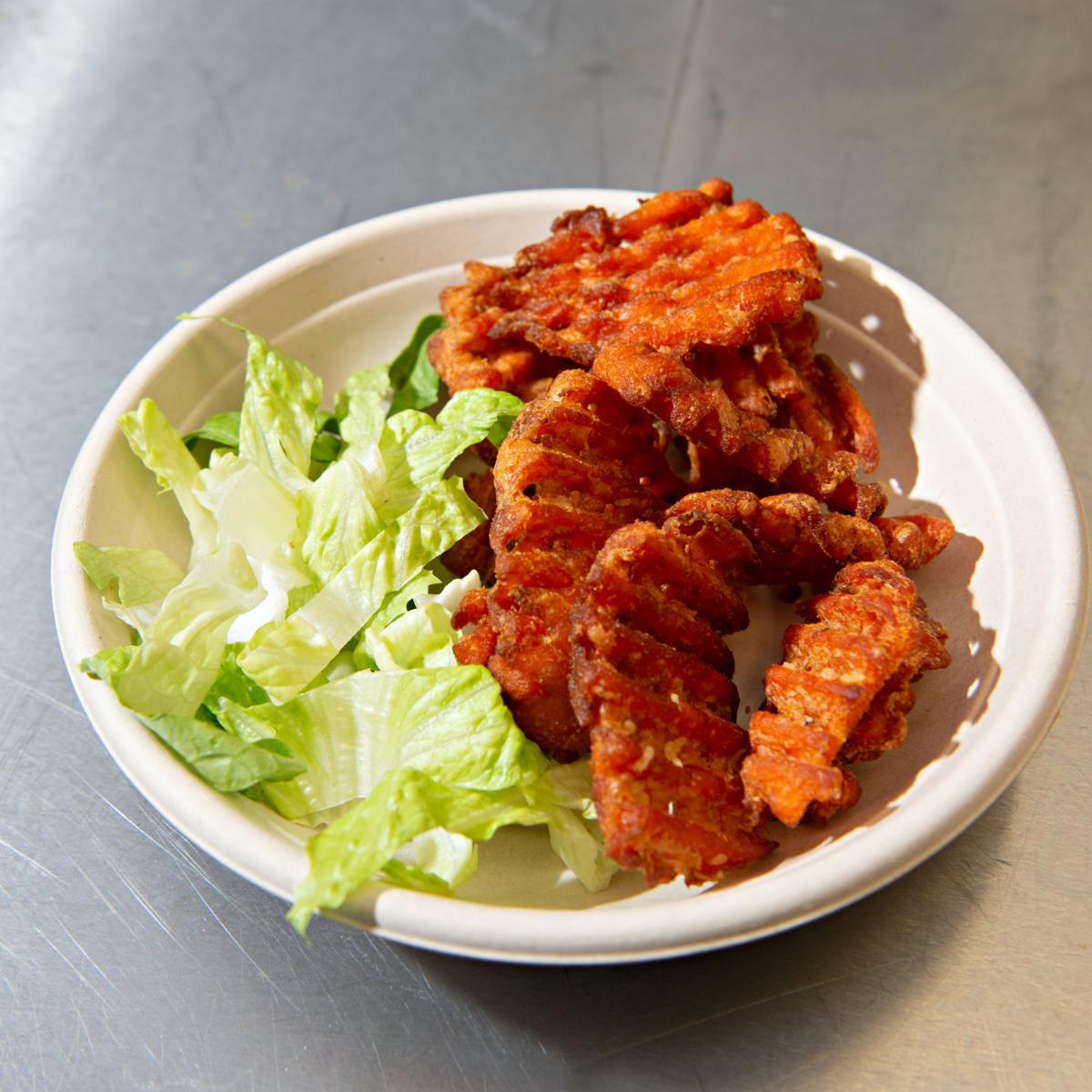 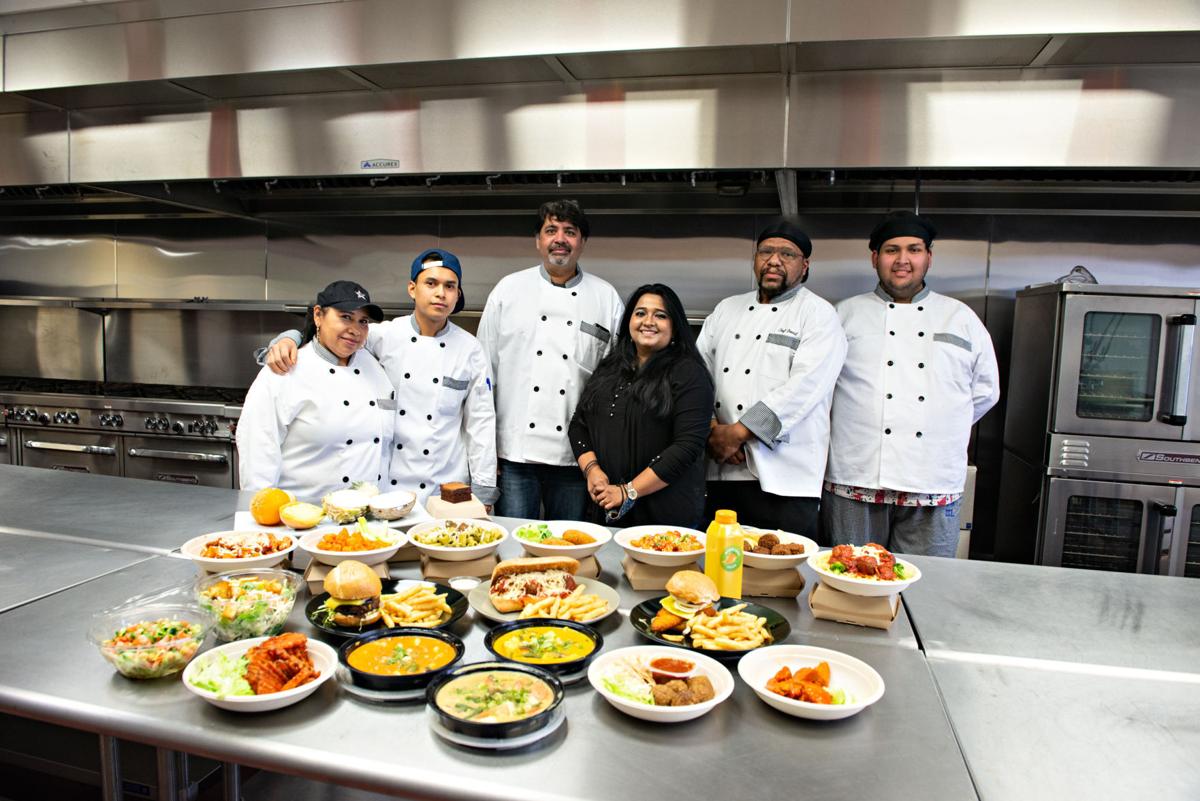 The staff at Vegan 15 in Egg Harbor Township.

In 2021, ordering delivery is a regular part of life. And the days when pizza and Chinese were the only options for this are now long behind us. Thanks to delivery apps, folks are able to have everything from subs and burgers to sushi and seafood dropped off at their door with a swipe of a finger.

And though delivery is the heart of the concept at Vegan 15 in Egg Harbor Township, that is really only the beginning of the story.

Business partners Sabitha Vis and Ansari Ahamed met as childhood friends in their native India. After coming to America in the late ’90s, Ahamed joined the restaurant industry as a chef in New York, while Vis worked in the construction business. Eventually they decided to go into business together.

“I was working in a traditional brick and mortar restaurant in New York and it was the same old grind. And I started to look at some other options and decided to take a restaurant concept and combine it with technology,” Ahamed says.

And so he and Vis did just that. Although Vegan 15 is located in a physical space inside an obscure section of the English Creek Shopping Plaza in Egg Harbor Township, its concept is all about bringing the restaurant experience to a takeout and delivery format, while keeping the quality on par with what you might expect and the prices for each entrée at around $15.

“We call ourselves an internet restaurant,” Vis says.

But keeping the restaurant quality up to par in a delivery format was a challenge.

“In a restaurant, it’s so easy to cook something and send it out and have people enjoy it. But when food has to travel for 15 minutes, it gets a lot harder to maintain the same quality. So we have worked very hard on that. We have experimented and worked with a lot of vendors on our packaging to make sure everything arrives just right.”

When they first began in 2019, the menu was a broad one, with everything from pizzas to curry dishes. While the food was great, the vision seemed a bit blurry.

“It was becoming too many different cuisines in one, and the real concept was losing its identity,” Ahamed says. “And so we decided to split it into different brands. Now Vegan 15 is one of several concepts we do.”

Ahamed is able to pull off having more than one brand due to the layout of the facility. The space is the site of a former cooking school, which means multiple kitchens are onsite, enabling him to keep the brands truly separate and make sure that things like vegan and Halal foods are prepared to the proper standards.

Vegan 15 is their most popular brand right now, and they specialize in creating vegan versions of some of your favorite dishes. The menu is extensive, with a long list of appetizers, salads, main entrees, sides and desserts. And for a meat eater, it’s a really fun experience to sample items and see how close they get to the real thing.

Managing to convince someone they are eating crab cakes when you have subbed in hearts of palm might seem like an impossibility, but they pull it off nicely, and the vegan tartar sauce that is paired with it could please even the staunchest seafood lover.

Buffalo cauliflower is starting to show up on menus at non-vegan restaurants as well, but the version here really hits the spot, with a spicy – but not too hot – sauce coating some beautifully crisped florets. But if you want something even closer to the real thing, their buffalo chicken bites taste like chicken and have the mouthfeel of a boneless tender. The vegan blue cheese dressing that came with it made a perfect option for dipping.

I plowed right through the Vegan 15 Burger, a Beyond Meat burger served with their signature sweet potato waffle fries. The sesame ginger chicken was another hit, with chunks of vegan chicken served with brown basmati in a sesame ginger agave sauce with green onion and organic broccoli.

Of course they don’t have to rely on simply trying to recreate meat dishes at Vegan 15. Much of the tastiest dishes are not masking anything, but relying on the ingredients themselves to be the stars of the show. The Yoga bowl is busting with flavors of curried chickpeas, yellow lentil, pico and basmati rice and the vegan Caesar salad is an obvious slam dunk, with a vegan dressing and parmesan adding zest to the organic romaine and garlic croutons. Used to adding grilled chicken to your Caesar salad? No problem. It can be topped with vegan chicken for 5 bucks more.

Three types of Thai curries (red, green and yellow) are offered, as well, with fresh organic veggies blending effortlessly with tofu, curry sauce and coconut milk. Basmati rice comes with it, but quinoa can also be added for $2.95.

Desserts include a variety of delicious frozen sorbets, available in flavors like pineapple, coconut, orange and mango – each served in a visually pleasing manner, making use of hollowed out versions of the fruits themselves. Chocoholics will enjoy the vegan Belgian chocolate cheesecake, which is dusted with imported cocoa.

Ordering from Vegan 15 is as simple as logging onto their website and selecting what you want to eat. Partnered with Grubhaul, they offer delivery services from 11 a.m. to 11:45 p.m. daily, and you can track your order via text message after ordering.

“Today, the customer is an Amazon customer,” Ahamed says. “They believe that reality is just like Amazon, where you can order anything at the touch of a button. So we thought since the customer has the power to order with their smartphone, we have now given them the power to order from us directly. And when you order from us directly, we will take care of you much better than if you were to order food through a big third-party company (like DoorDash) or something.”

Vegan 15 is not the only concept Ahamed and Vis are running out of their space at English Creek. While the plan is to open up to many different brands, right now several online dining concepts are operational. Chef in a Box is a food delivery concept in which you are sent the ingredients to prepare your own meals at home; Indiyas delivers customers simple and delicious Indian food; Halal Kitch focuses on things like shawarma, gyros, falafel and Middle Eastern food; while Pizza 90210 is all about gourmet fancy pizza utilizing all veggie-based, gluten-free dough.

Ahamed and Vis are determined to expand with demand, making local internet-based delivery with the highest quality their claim to fame. And their confidence in the concept is impressive.

“McDonalds created 3,000 plus restaurants over 25 or 30 years. But with a concept like this, we think we can create 3,000 restaurants in less than 5 years,” Ahamed says.

BETWEEN YOU AND ME: If you are a meat eater who laughs at the concept of vegan food, stop laughing. Vegan 15 will change your mind in a hurry. Order the crab cakes.

Wingin’ It … at The Cove

Brigantine is a quirky place. Though it’s right next door to Atlantic City geographically, once you cross over the bridge it feels like you’ve…

When Anthony and Nick DellaVecchia opened Tony Beef in Galloway Township three years ago, it was obvious the brothers had a vision beyond thei…

5 places to grab an empanada and a cold one

With Easter behind us and no other major holidays coming up for the rest of the month, you may be searching for a reason to celebrate. Fear no…

It’s Pizza Palooza! - Critics and readers decide once and for all who makes the best pizza in South Jersey

Back in the late ’90s, when I was in college, I spent a particularly crazy evening bar hopping with friends. It was one of those nights that i…

5 places to find a great glass or bottle of wine

It’s Easter weekend, a weekend where we celebrate the arrival of spring, family and religion. And during that quality family time, there is bo…

I really thought the seltzer craze would lose its fizz, but people are enjoying them and with warm weather arriving, they are selling more tha…

Owners Ansari Ahamed and Sabitha Vis are the masterminds behind the Vegan 15 concept.

The vegan Caesar salad serves as a great starter to your internet restaurant experience.

Red, green and yellow Thai curries are some of the more exotic options available on the Vegan 15 menu.

Don’t skip the dessert — a fruit sorbet can make your day.

The staff at Vegan 15 in Egg Harbor Township.