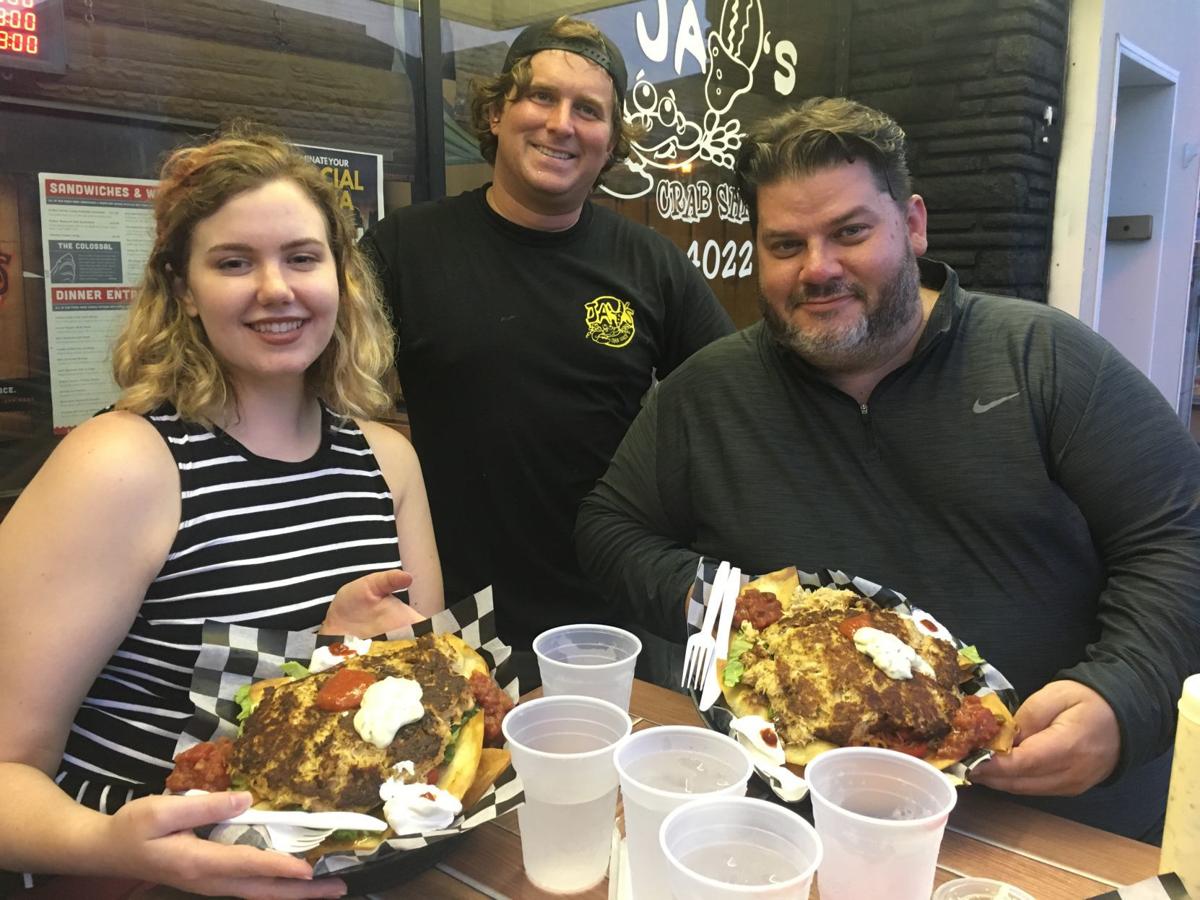 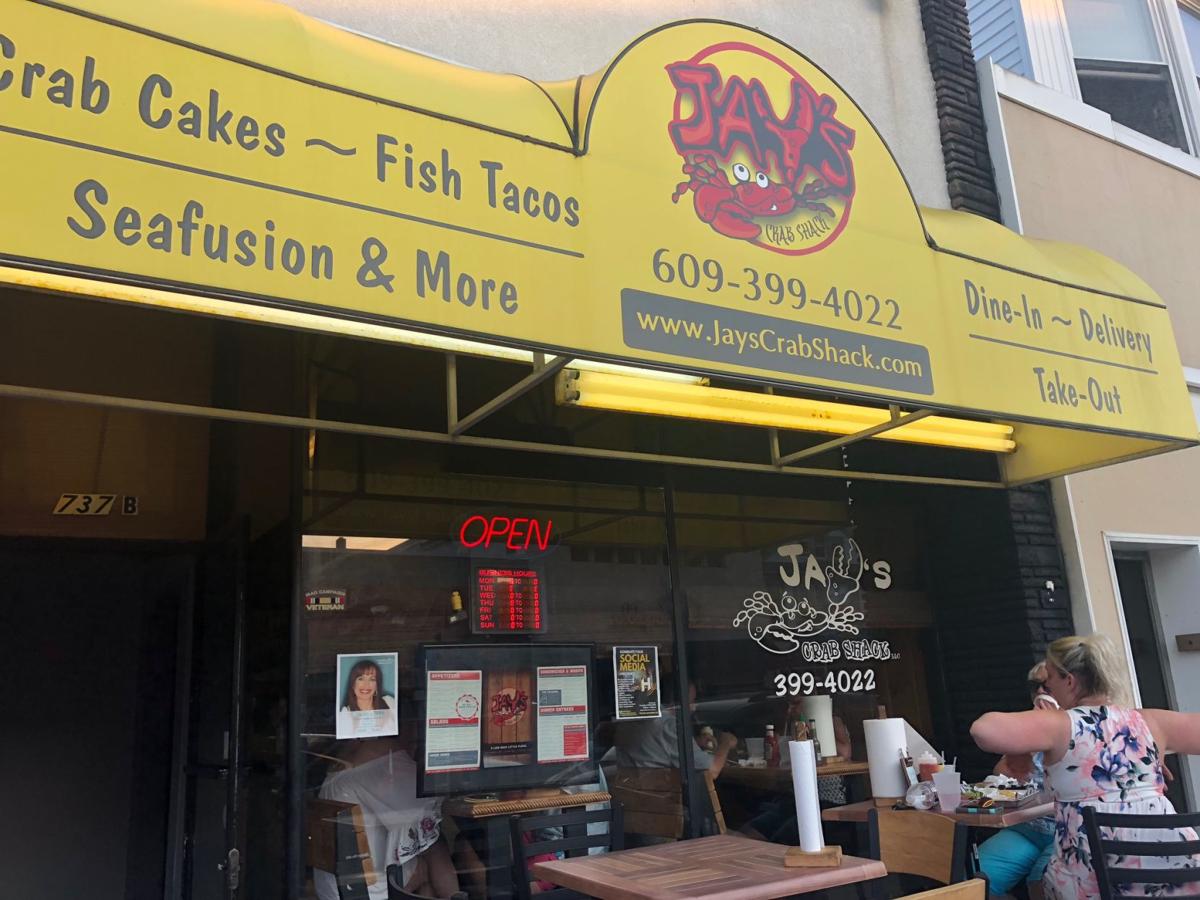 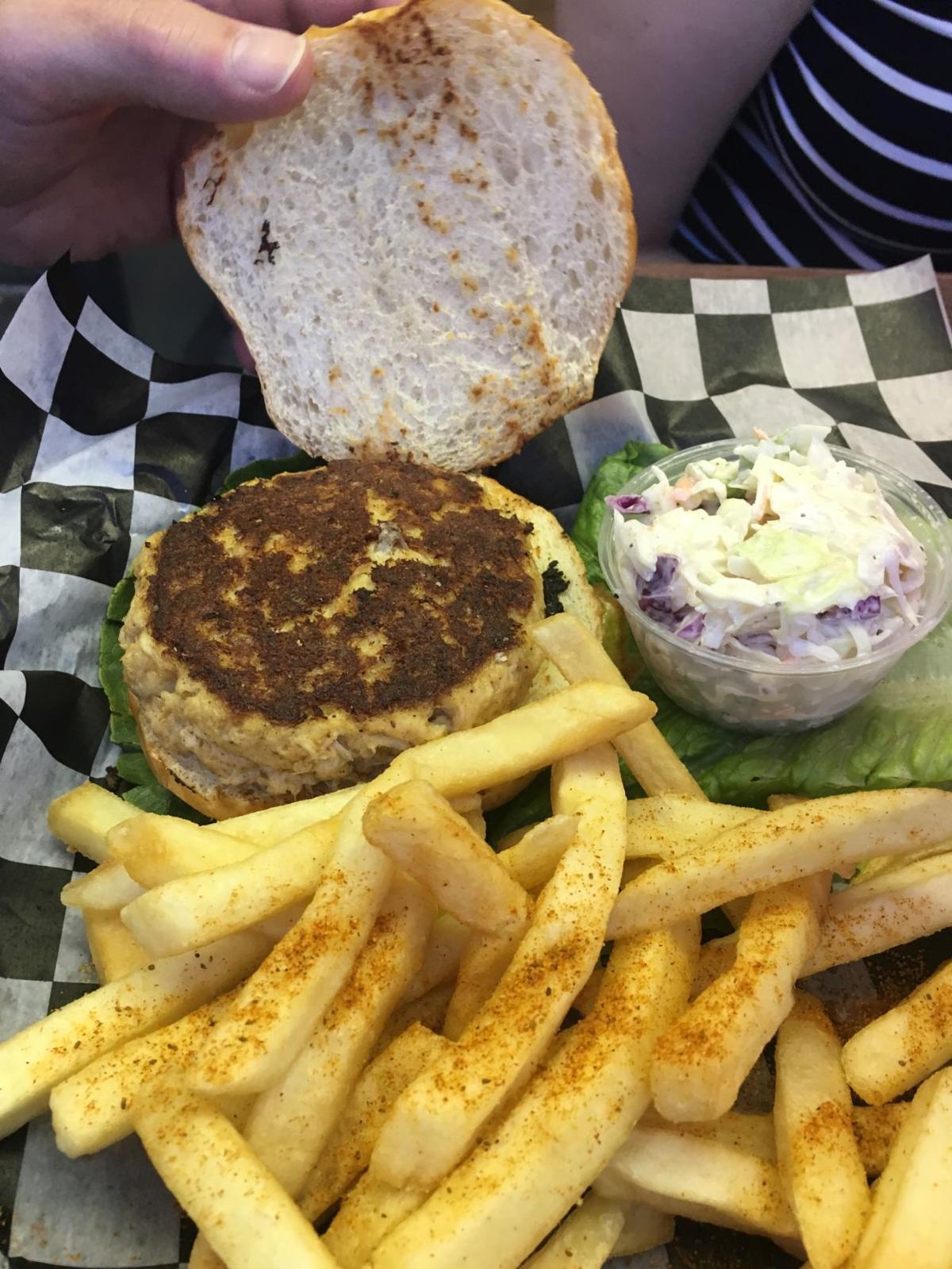 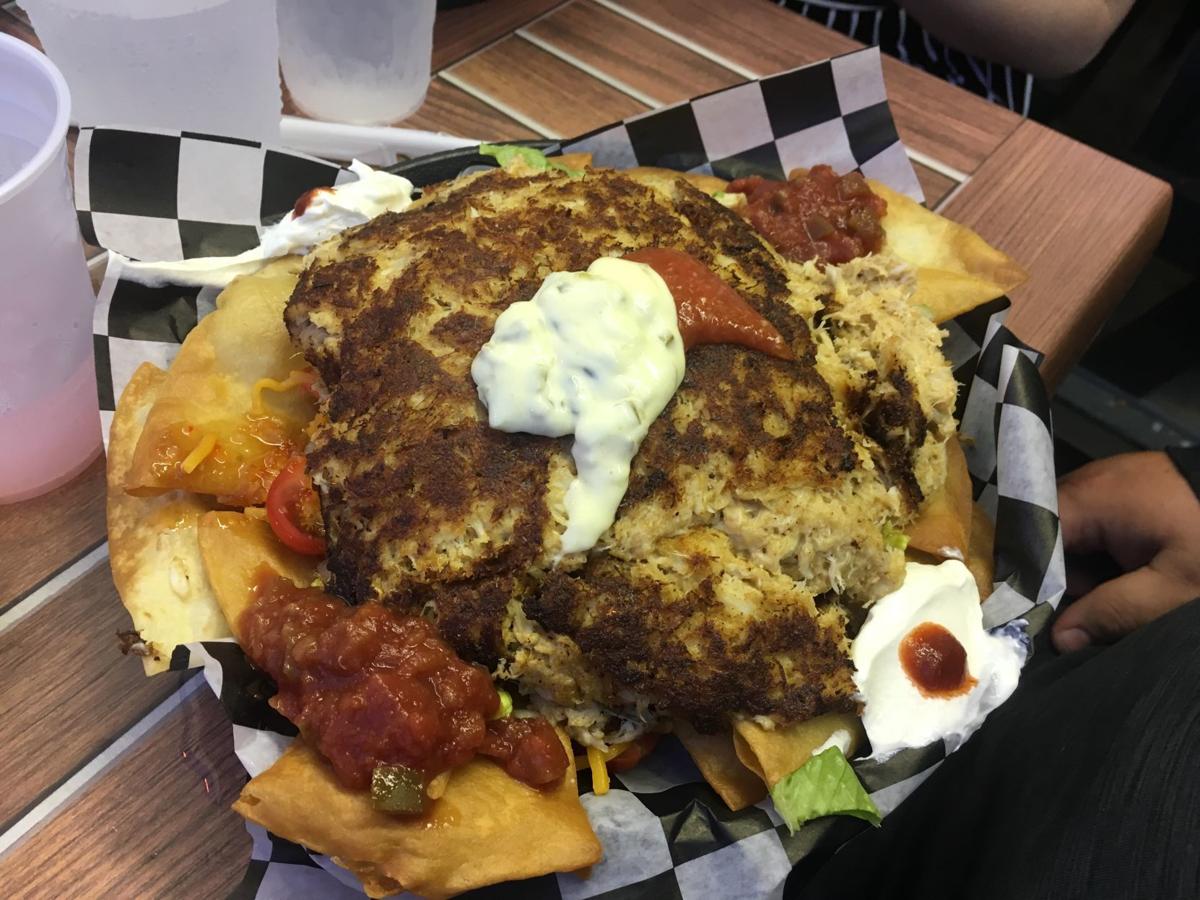 ‘The Colossal,’ a 1-pound crab cake from Jay’s Crab Shack in Ocean City.

When the sun goes down in Ocean City and the Asbury Avenue shops lock up for the night, there’s one spot that’s still bustling with activity. Jay’s Crab Shack — a tiny spot with a bright yellow awning that’s as casual and comfortable as they come.

Jay’s is a pleasant place, owned by a pleasant man named — you guessed it — Jay (Graham), who greets you with the chilled-out attitude of a dude that just washed in from a righteous, yet peaceful day surfing the waves. But we didn’t come for a leisurely chat — we came to compete, by seeing who could eat the most of a monstrosity called The Colossal.

The Colossal ($39.99) is a 16-ounce (read: 1 pound) crab cake piled on top of tortilla chips, sour cream, salsa, lettuce, tomato and sweet chili sauce. Anyone who can finish the lot has the chance to receive a Jay’s T-shirt and be featured on the Wall of Fame.

A.C. Weekly’s Associate Editors, Ryan Loughlin and Rebecca King, did not have fame on the mind, but rather the desire to settle a long-standing debate — who is the better eater?

Last year Rebecca and Ryan, who was accompanied by Director of Entertainment Publications Scott Cronick, went head-to-head in the Three Brothers’ Pizza challenge, where customers have one hour to fully consume one of their insanely big pizzas. Both Rebecca and Ryan managed to get down two-and-three-quarter pieces of the massive pie — a tie that would haunt them all year.

So, they sought out another competition, The Colossal challenge. Here’s how things went down.

Rebecca: When Ryan told me about the 1-pound crab cake challenge at Jay’s, I responded — and we know this for sure because Ryan wrote it down word for word — “I really don’t think that sounds that hard.” Of course, hindsight is 20/20, but I still stand by that statement. Eating a 1-pound crab cake doesn’t sound that hard.

Ryan: This is where Rebecca’s youthful naivety shows. While a crab cake that weighs 1 pound may not be impossible to down, the plethora of other ingredients that lie beneath it are what would surely be the real challenge. Either way we were hoping to break last year’s tie, and this sounded like a good way to do it. Last year there was a one hour time limit, while this year there was no specific amount of time required in order to finish successfully. Because of this loophole, a part of me considered eating half of it, sleeping at the table for eight hours, then waking up to finish the other half while declaring myself the winner, but ultimately I decided that felt like cheating, and I wanted to win fair and square. For me this challenge was not about the prizes (good thing too, as the only “prize” offered to the winner was that he or she could receive a T-shirt. Not that they would, just that they could, as if it was a raffle for a Corvette or something).

Rebecca: When we got there, the crab cake was the size of a dinner plate and about an inch thick — definitely bigger than I expected — laying on a bed of nachos. I’d say it had the crab meat of about four normal-sized crab cakes. Once we dug in, the good thing was The Colossal really is mostly crab meat, without all that filling that usually bogs down (and ruins) a crab cake. A lot of places claim to have a great crab cake, but few actually do. But the cake at Jay’s really is fantastic, another positive, considering I was about to eat a full pound of it. It comes with a bit of tarter sauce on top and a sweet chili sauce that was a delicious addition.

Ryan: Having The Colossal brought out to our table was like meeting Andre the Giant in person. Sometimes you need to see something up close to truly understand its size. It was huge. The crab cake itself was more intimidating than expected and underneath was an all-star team of homemade tortilla chips, cheese, lettuce, salsa, chili sauce and god knows what else. I went to work on the crab cake first, dousing liberally with tartar sauce and occasionally using a chip as a spoon just to try and kill two birds with one stone. But The Colossal proved far too difficult to kill, regardless of how many stones I threw.

Rebecca: I’d say I ate about two-thirds of the crab cake before I started to feel really, truly full. I was mainly focusing on the cake, with a few nibbles of the chips here and there. I managed to finish the crab cake with only a few forced bites at the end. But the chips were a no-go. There was zero chance that I could finish the chips and salsa, especially because all of the liquid from the tarter sauce, salsa, chili sauce and sour cream had soaked into the chips, making them soggy. If I had eaten the chips along with the crab cake, this probably wouldn’t have been the case, but because I was so focused on the crab cake, I completely missed my shot at edible chips.

Ryan: Like Rebecca, I knocked out the crab cake with little issue, but the rest of the plate proved to be too much for either of us. We both ate some chips and I proudly took care of any bits of cheese I could find, but ultimately, I was done. And as I looked down at both of our plates a feeling of sickness came over me that had nothing to do with the food. Our plates had the same amount of food left on them. Again. Ugggggggggh...

Rebecca: I’m happy to say that Ryan and I tied yet again. I’m even happier to say that this challenge was way less painful than the pizza challenge last year. Because there was less gluten and dairy in this dish, it went down much easier. On top of that, the crab cake really was delicious. I’d recommend getting The Colossal and sharing it with four or even five people — or just getting a normal-sized crab cake from Jay’s for yourself. But hey, if you’re really hungry, or have an amazing capacity for food, I’d say this is one food challenge that’s actually doable.

Broadway on the Boardwalk

"Broadway on the Boardwalk" performed live at Kennedy Plaza on the ATlantic City Boardwalk Monday, July 16.

America’s greatest family resort still has a ton of established eateries known for their sweets, like Brown’s, Fractured Prune and Dot’s Pastr…

Beachgoers throughout New Jersey have chosen Ocean City as “New Jersey’s Favorite Beach” in a statewide online poll for the fifth consecutive year.

‘The Colossal,’ a 1-pound crab cake from Jay’s Crab Shack in Ocean City.