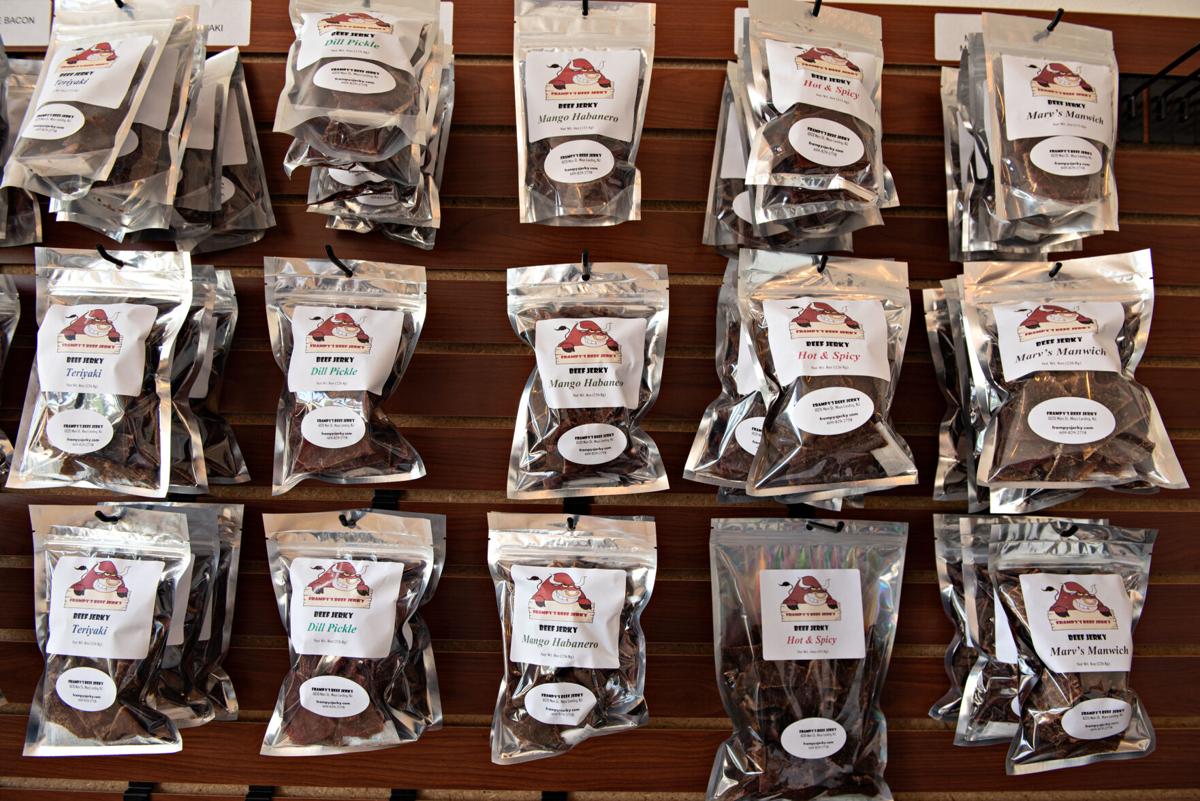 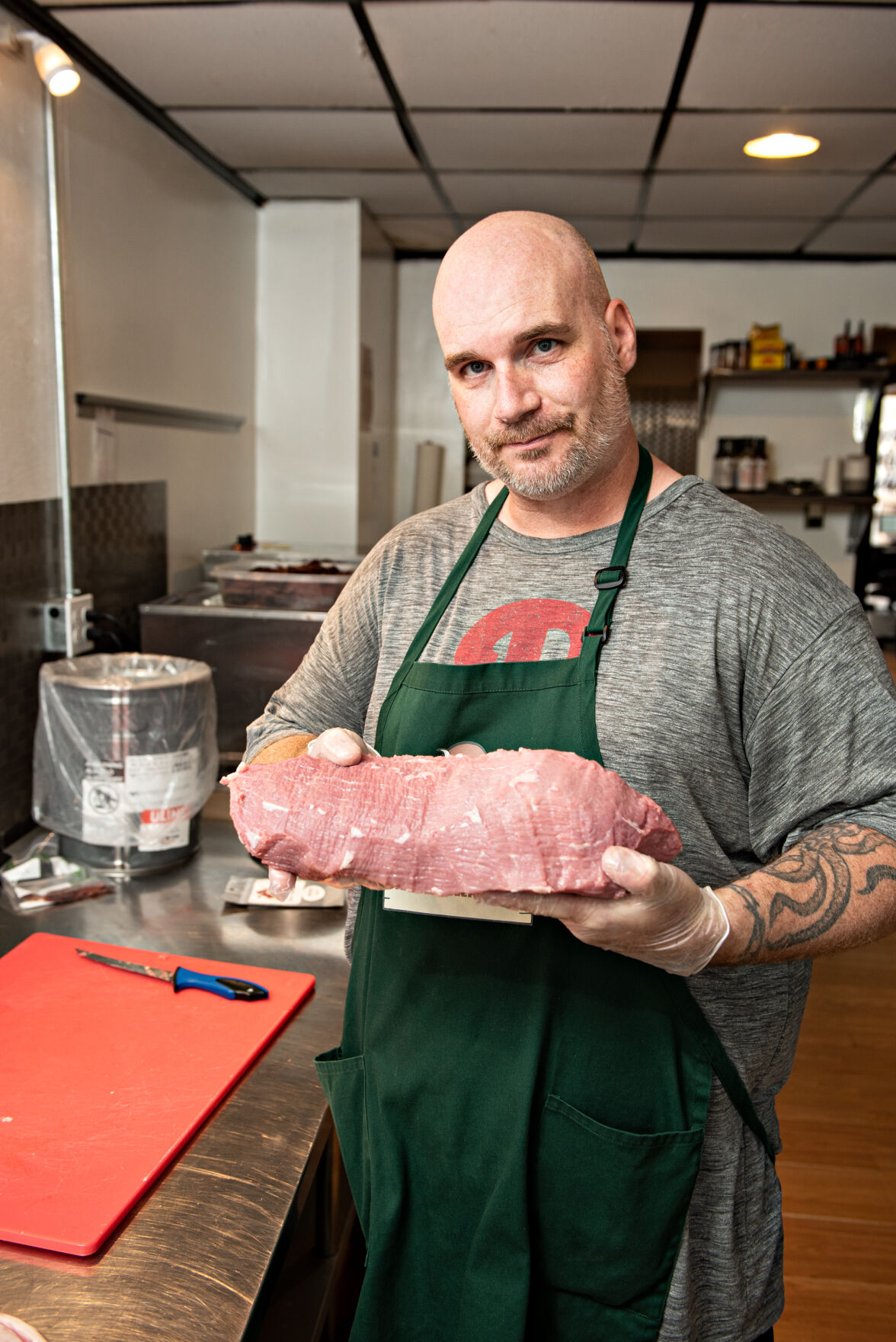 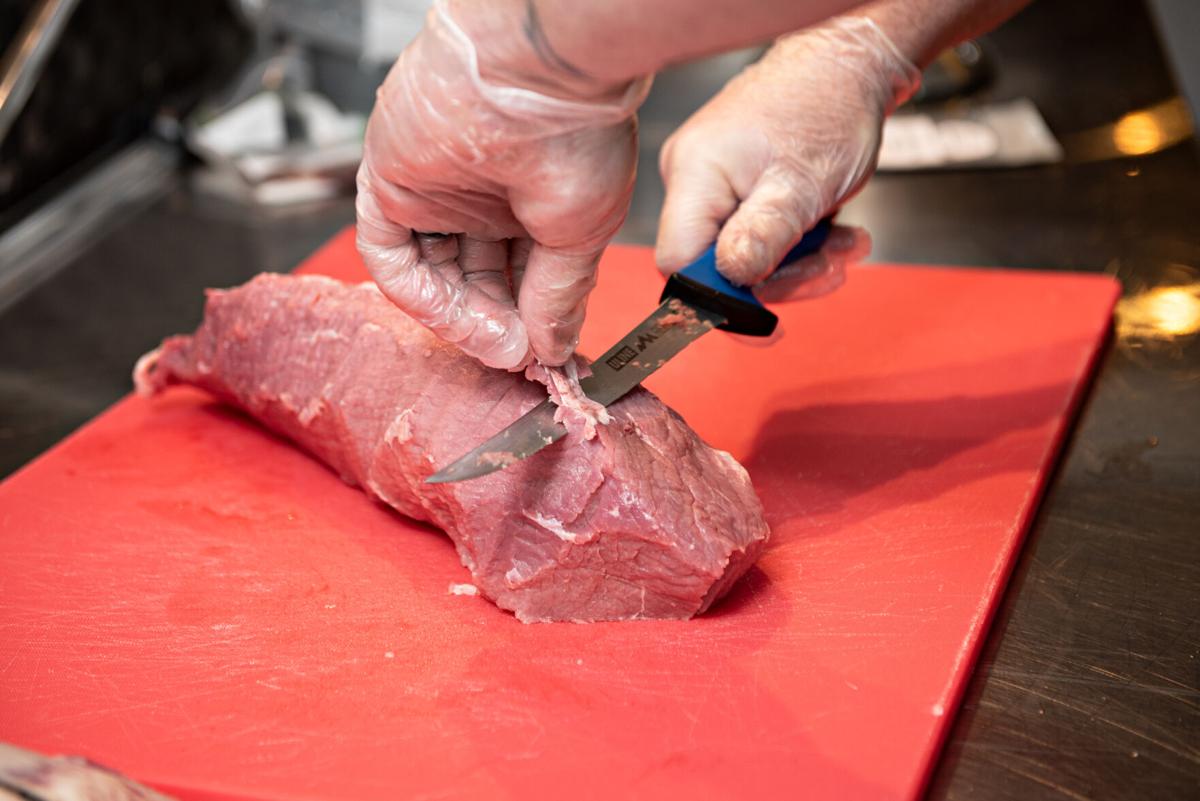 In order for it not to spoil, all fat must be trimmed from the beef Frampus uses. 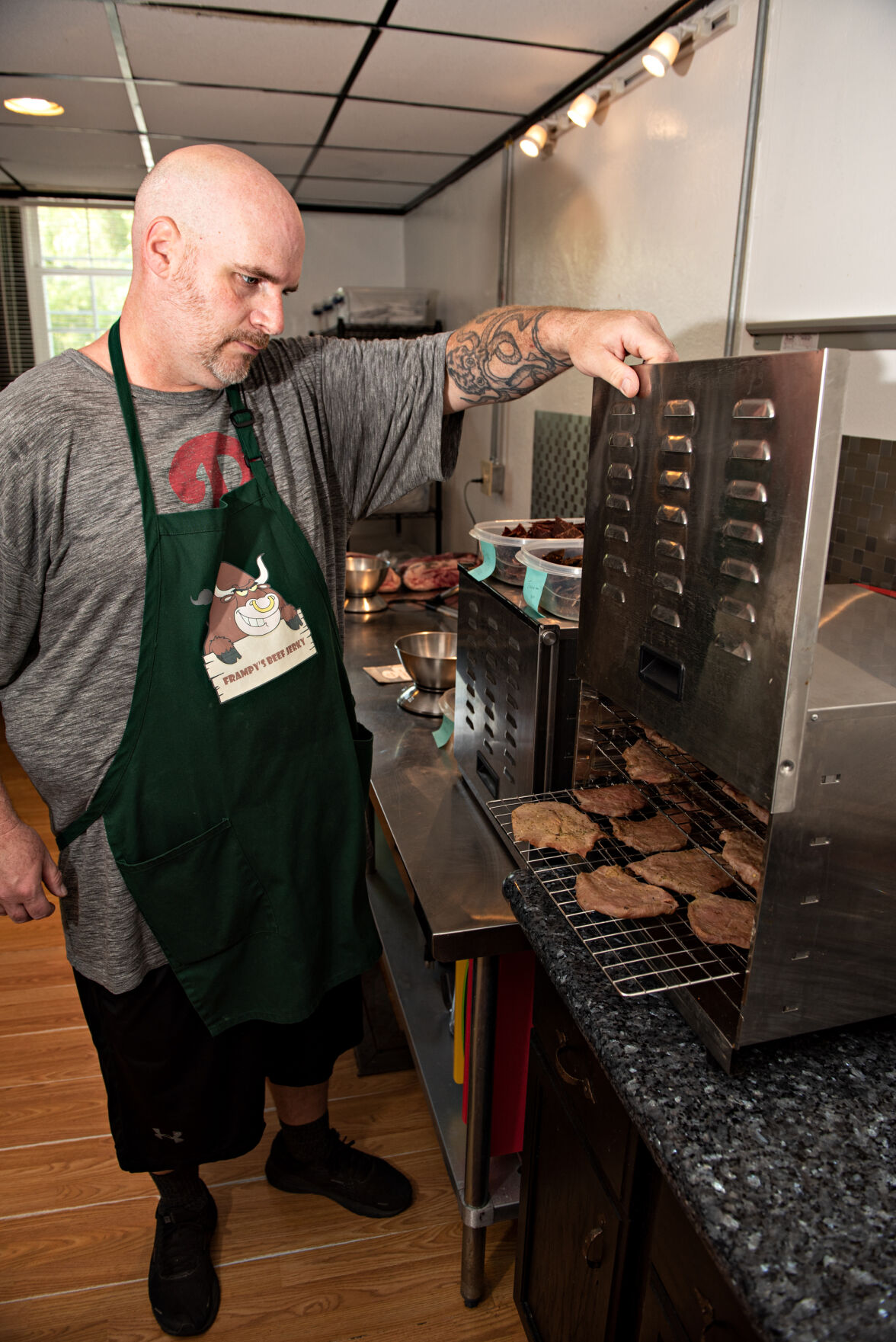 Frampus checks on a batch of meat as it finishes its first cook time. 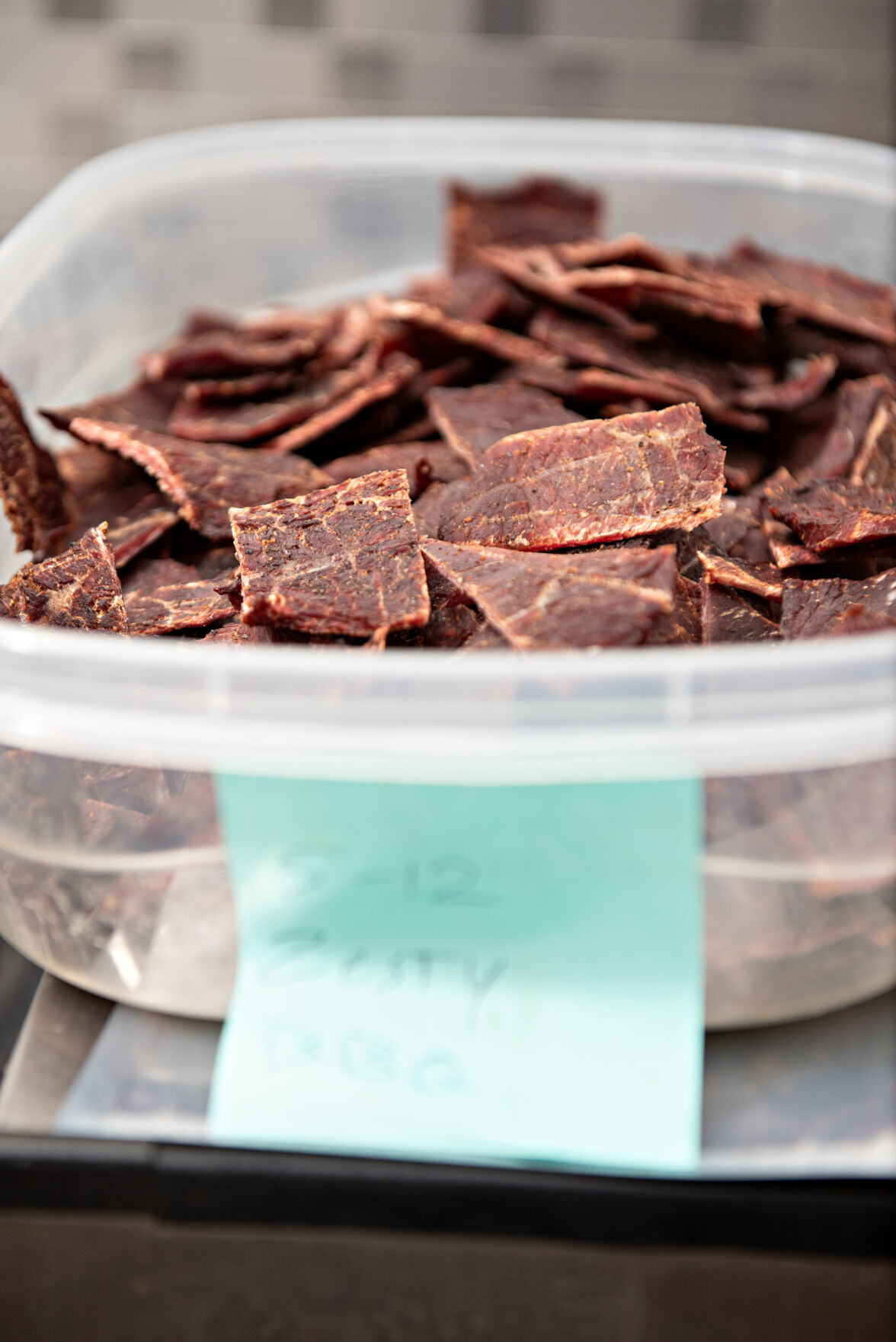 And while there are plenty of places around South Jersey to grab some jerky, there is only one store completely devoted to it: Frampy’s Beef Jerky in Mays Landing.

The Jerky King of South Jersey is Michael Frampus, an Estell Manor resident who began making the chewy meat snack for himself as a hobby before things got out of control.

“I am a hunter, and I started making jerky with my own deer,” Frampus says. “But then I didn’t get another deer and had no meat to make jerky but had the equipment and the spices, so I began buying beef cuts from the supermarket and made small batches.”

Frampus began sharing his jerky with his co-workers, who flipped over the quality and flavor.

“They thought it was pretty excellent and started telling me, ‘I don’t want some of yours. I want to buy some from you.’ And it evolved pretty quickly from there.”

Frampus began selling it to friends and family like contraband — packaged in ziplock bags with magic marker written on it describing the flavor.

“It just got to the point where I couldn’t keep up,” Frampus says. “So to be legit, the health department won’t allow you to make it from your home, so I got this location on Main Street and started doing everything there.”

Frampus began his Main Street lease in 2019 but never opened until this past April because of COVID.

“It crippled me,” Frampus says. “I was leasing this storefront and had no revenue. Thankfully, between my full-time job and online sales, I made it through. I was delivering as far south as Rio Grande and as far north as Ocean County to get my name out there, to build the business.”

Since opening, the community has embraced Frampus and his meat creations.

“As soon as we opened, people began stopping by,” says Frampus, whose bad luck continued with the closing of the bridge near his store that is expected to open soon. “If it wasn’t for the support of the community of Mays Landing, I would have drowned. I am still not making money, but you have to spend money to make money. And I know that will happen sooner than later.”

When it comes to Frampy’s Beef Jerky, everything is done in Frampus’ small store. It starts with USDA Choice eye-round beef that is trimmed meticulously by Frampus.

“Even though it’s a very lean meat, you have to trim all of the fat because the fat is what makes the meat go bad,” he says.

The meat is cut on deli slicers into uniform slices before it’s marinated in different flavored dry rubs mixed with water for 12 hours, including the cure for the jerky that also keeps the meat from spoiling.

The meat is cooked in a small oven for about an hour and goes through another bacteria-killing stage called lethality to ensure consumer safety before it’s put in one of Frampus’ many small dehydrators for six to seven hours.

“Then we package and do everything ourselves,” he says. “I even make my own labels. Every single step is done in that little store.”

Frampy’s started with four flavors — original, teriyaki, cracked pepper and garlic and hot and spicy — but has evolved to 24 flavors that line the walls of his storefront.

The No. 1 seller is maple bacon, which sells twice as much as any other flavor, with mango habanero and teriyaki rounding out the Top 3.

“Because of all of the flavors, people generally pass on the original because they are intrigued by what they can get here,” says Frampus, whose personal favorite is andouille because “it is loaded with flavor and offers heat that builds toward the end.”

“But people really go crazy for our dill pickle because it’s so different,” Frampus says. “Right now I am working on a smoked Applewood one that I am not sure is going to make the cut. And we recently experimented with salt and vinegar, which people like but I am still trying to find the perfect balance for the salt and vinegar.”

For those wondering about the jerky’s consistency, Frampy’s tried to play it down the middle.

“It’s not crispy and not soggy,” Frampus says. “You have a fairly tender piece of meat that isn’t impossible to bite through.”

Frampy’s also makes jerky using chicken, pork and turkey, but they have to be special ordered, for now. He hopes to soon offer those regularly in store, along with more exotic meat choices including bison, ostrich and gator.

When you go to Frampy’s, it’s hard not to walk out with some of the other goodies Frampus has stocked his store with, including a local selection of craft sodas and snacks, including Joe’s Tea & Chips from Upper Montclair, Jersey Devil sodas and salsas made in Lanoka Harbor, hot sauces and much more.

“I am a fat guy, so I am pretty good at assembling great stuff that is not healthy for you at all,” Frampus says with a laugh. “I really like cream soda, so I put together a great bunch of obscure sodas and snacks you don’t see everywhere.”

Frampus hopes to expand his brand to more local retail outlets. Currently, his jerky can be found in local bars, specialty shops, campgrounds and liquor stores.

“And then we want to keep moving to more retail in the state and – who knows – maybe nationwide,” Frampus says. “I think we have a great product here. And we also keep it affordable, which is part of the business strategy. I am building this and building this for what I think could be a big business some day.”

How much: Jerky is sold in 4-ounce, 8-ounce and 1-pound bags ranging from $7 to $25; drinks and other store items range in price but are affordable

Between you and me: Frampy’s sells a lot of jerky to those looking for a more healthy snack. While jerky contains some sugar and lots of salt, it is loaded with protein and is relatively low-carb, depending on the flavor.

In order for it not to spoil, all fat must be trimmed from the beef Frampus uses.

Frampus checks on a batch of meat as it finishes its first cook time.