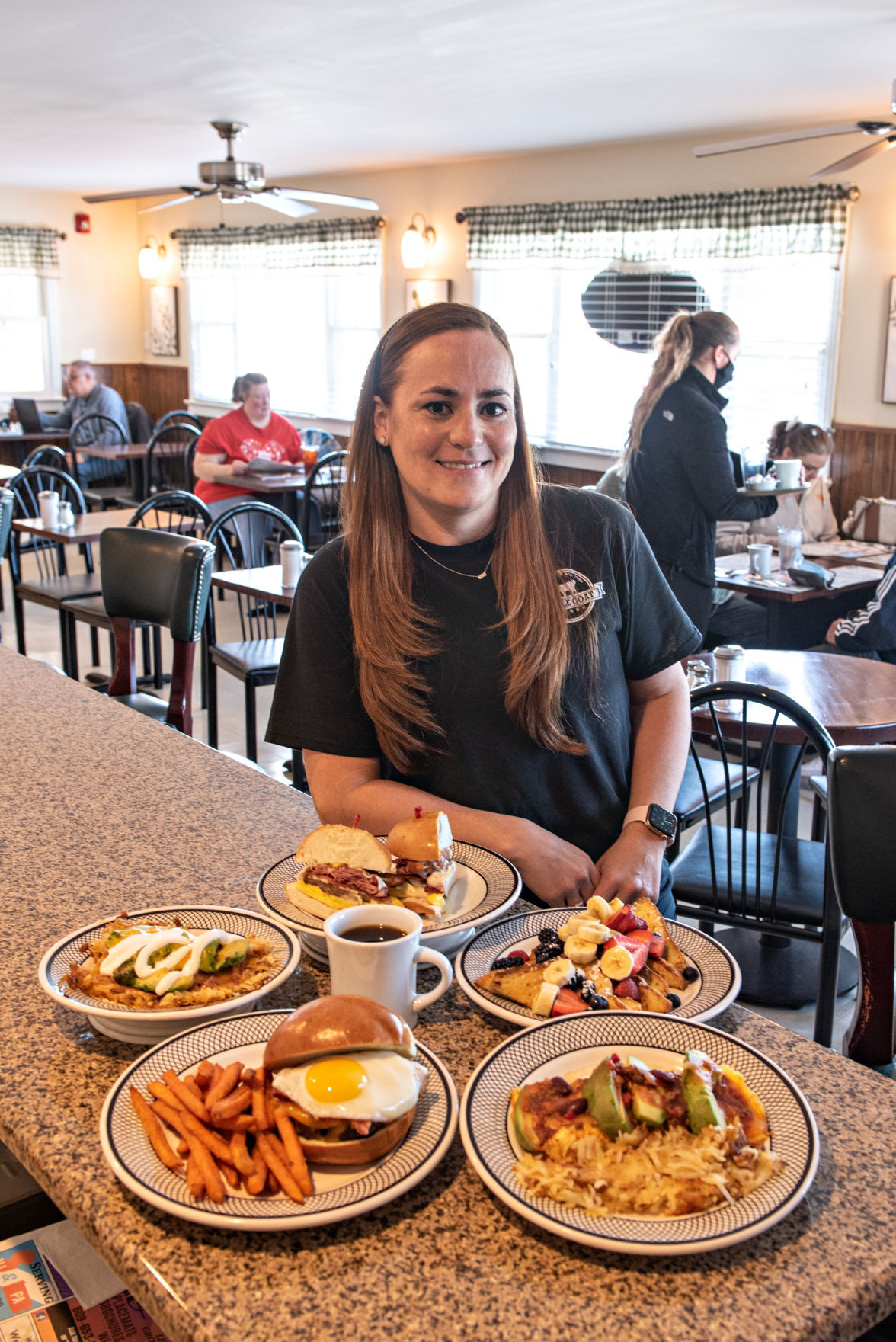 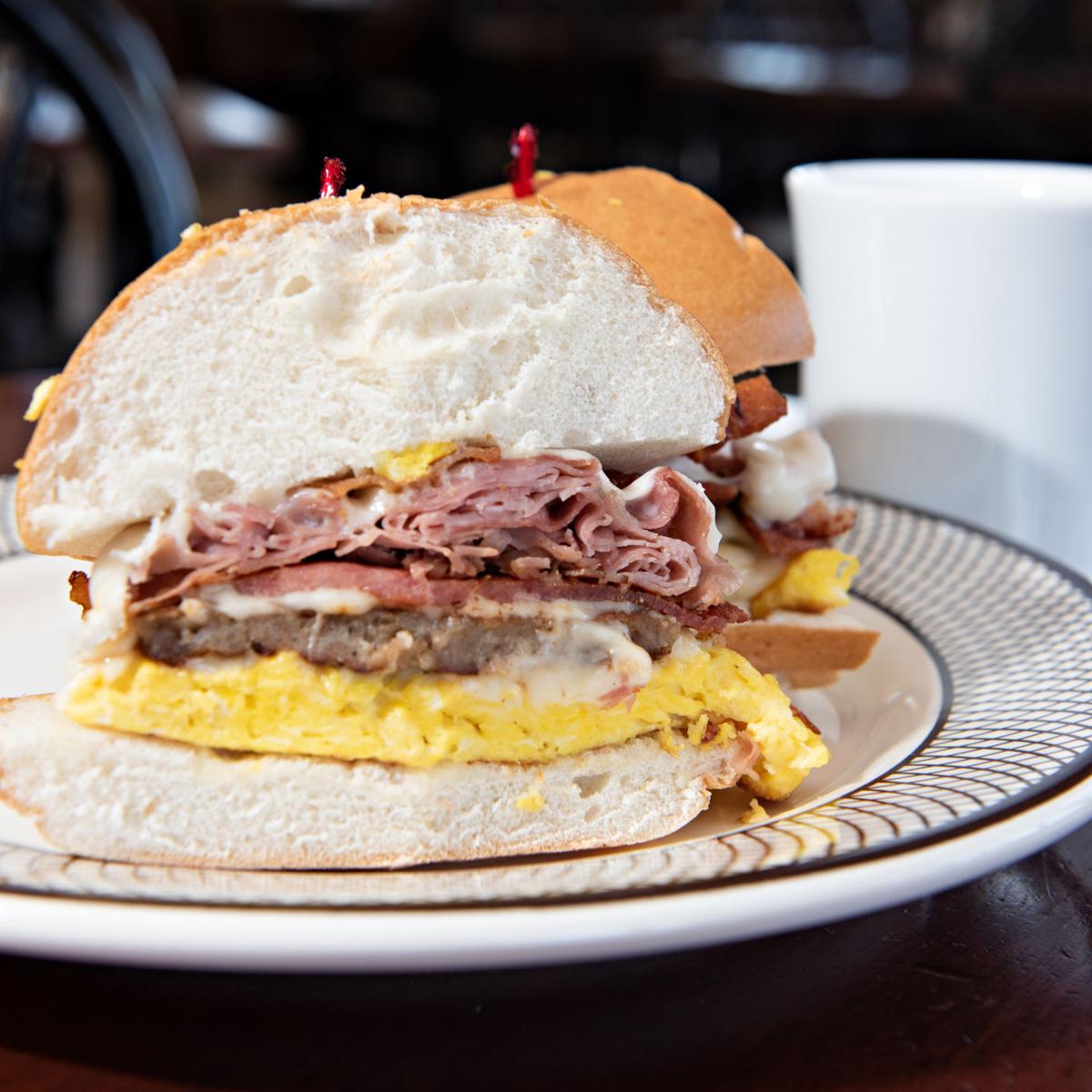 The Belly Buster sandwich is about as hearty a breakfast as one can tackle. It consists of eggs, bacon, sausage, ham, pork roll and cheese all stacked high between two buns. 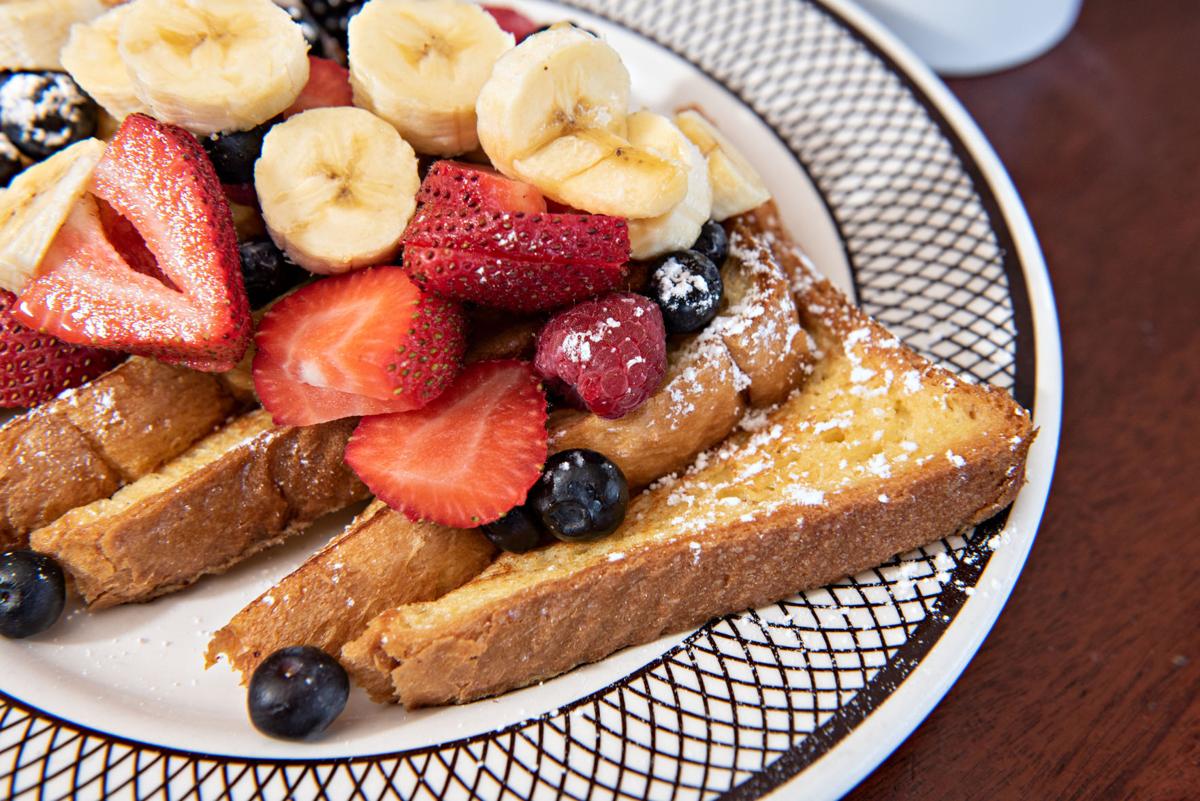 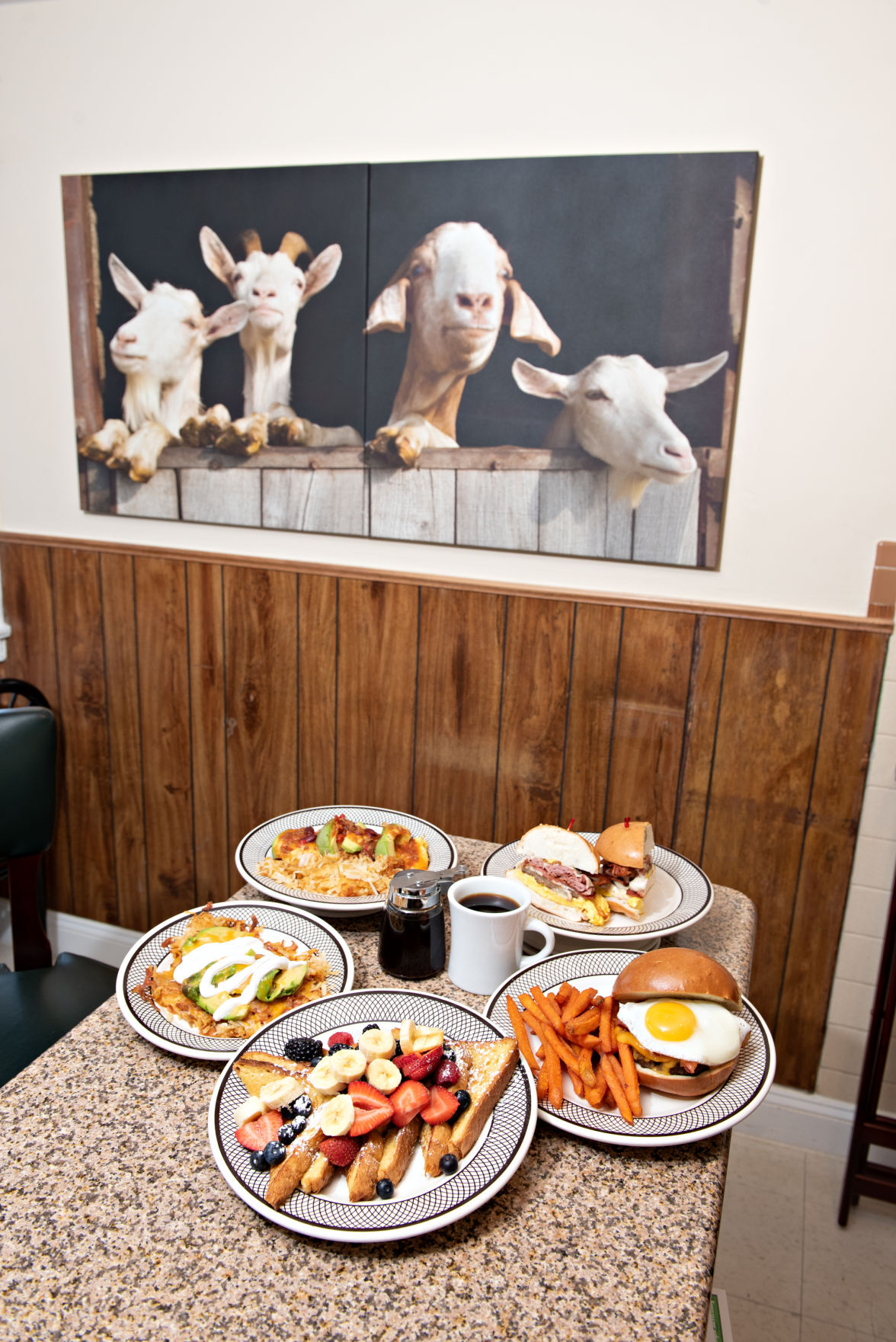 The focus is on breakfast and lunch at Little Goat Diner. ‘It’s what I grew up with and what I know,’ says Nick Basdekis.

Nick and Kelly Basdekis seem like they are destined for each other. And the couple also seems like they were destined to own a restaurant.

Nick, 37, and Kelly, 36, met as toddlers when Kelly’s father Jim Plamantouras owned the former Olympic Diner in Pleasantville, and Nick’s father Paul Basdekis worked there, and the two would play together in the restaurant while their parents worked.

Eventually, the Olympic closed but Nick and Kelly stayed in touch, began dating when they were 19 and married 12 years ago.

Their parents stayed in the business, with Nick’s family running the Sunryser Restaurant in Absecon and Plamantouras opening JJ’s Diner, at one time in Pleasantville and now in a larger space in Egg Harbor Township. Before COVID hit, Plamantouras and his wife Pat had plans to reopen his much smaller, original location and have two JJ’s locations. But fate had other plans.

“I was looking to do my own thing for a long time since I was in the family business forever,” said Nick, who worked with his parents at Sunryser until recently. “I wanted something all my own. And Jim said, ‘Hey, there’s a little diner sitting there, why not take that over and run it?’ And were kind of floored by that, but we knew it was a great opportunity we couldn’t turn down.”

So, after lots of cleaning, ordering some new equipment and doing some slight interior renovations, the former JJ’s Diner at 610 W. Delilah Road in Pleasantville is now the Little Goat Diner, a cozy, 48-seat breakfast and lunch spot that doesn’t stray very far from what Nick learned at the Sunryser and what JJ’s always offered in the same location.

“I always knew if I was going to get my chance at this that I would offer breakfast and lunch,” Nick says. “It’s what I grew up with and what I know. Stick to what you know, right?”

Nick and Kelly seem to be that perfect complementary couple. Nick knows the kitchen and Kelly — an elementary school teacher in Egg Harbor Township – knows her way around a restaurant, too.

“I grew up in it, too,” she says. “So I know a lot about the front of the house and bookkeeping and paperwork. With our heads together, I know we can be successful.”

By the early signs, the Little Goat Diner looks to be exactly that with decent crowds and a hearty social media presence praising the new eatery for its tasty comfort food, big portions and reasonable prices.

Breakfast is the star at Little Goat with a large menu full of pretty much anything you would want for breakfast.

Their most popular selections are the Little Goat Specialties including The Hungry Goat ($11.49) with three eggs, bacon, sausage and ham with hash browns — maybe the best in South Jersey — or grits and toast; The Lumberjack ($10.99) with two eggs, bacon, sausage and a short stack of pancakes with hash browns or grits; The Nanny Goat ($11.49), which is the same as the Lumberjack but with french toast; and their famous creamed chipped beef ($8.99) and sausage gravy ($8.99).

“I think Nick’s buttermilk biscuits are what make the sausage gravy so great,” Kelly says. “They are homemade from scratch, not out of a can. The creamed chipped beef is served over white toast but I always get it over those biscuits.”

There’s also a variety of pancakes and french toast — check out the Banana Berry French Toast ($8.49) with mixed berries and bananas — breakfast sandwiches including the Belly Buster ($8.49) with eggs, bacon, sausage, ham, pork roll and cheese, and even a breakfast burrito ($7.99) and quesadilla ($8.99). Make sure you check out the loaded hash browns ($7.99) with avocado, bacon, cheddar and sour cream.

“When I go out to eat, that’s the kind of stuff I like to order. I just want to keep everything really fresh and constantly come up with new ideas and new specials like I always did at Sunryser,” says Nick, whose recent specials included a cinnamon apple french toast. “I do a pancake for every season like fresh pumpkin pancakes in the fall, peach pancakes with pecans in the summer and even egg nog walnut cranberry pancakes around Christmas.”

For lunch, the equally large menu offers fresh soups and salads and a wide variety of anything and everything you would want in a wrap or on a bun.

Nick is particularly proud of his homemade chili ($3.49 cup, $4.49 bowl), a twist on his father’s legendary recipe at the Sunryser.

“I took this and made it not so crazy spicy and gave it a sweet and tangy flavor,” Nick says. “When people ask me what’s in it, I tell them it’s a secret recipe.”

Diners can also check out a chicken parm sub ($8.99), a crispy chicken ranch wrap ($9.99), or the Delilah Special ($8.99), a sandwich with choice or corned beef or turkey with cole slaw and Russian dressing.

“When winter comes back I will do a lot of platters for specials, including hot roast turkey and roast beef,” Nick says.

So far, the couple has been handling their multiple jobs, running a restaurant and raising two children: 7- and 9-year-old boys. Putting family priorities first, the Little Goat Diner may be the only diner in the area closed on Sundays.

“We balance it pretty well,” Kelly says. “We are busy for sure, but it’s so great that we have amazing support from our families. But we just decided to close Sundays to keep that day about church and family and each other. On Sundays, we leave everything behind and just spend time together. We are not trying to become millionaires. We just want to be happy and to make others happy with some great food and customer service. We want to do what we enjoy. People seem to think we are crazy being closed on Sundays, but we can just send our customers to our family’s restaurants. So it’s a win-win for everyone!”

Between you and me: The Little Goat Diner got its name because Owner Nick Basdekis calls his kids little goats and his dogs little goats. And he and his wife Kelly would often refer to their current location as the little diner and the current larger Egg Harbor location of JJ’s Diner as the big diner. And since GOAT is an acronym for Greatest Of All Time, it just worked.

The Belly Buster sandwich is about as hearty a breakfast as one can tackle. It consists of eggs, bacon, sausage, ham, pork roll and cheese all stacked high between two buns.

The focus is on breakfast and lunch at Little Goat Diner. ‘It’s what I grew up with and what I know,’ says Nick Basdekis.