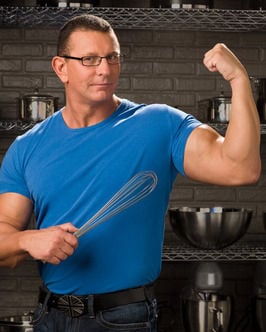 Robert Irvine is no stranger in Atlantic City. He spent eight years as a chef in town, split between stints at Trump Taj Mahal, Resorts and Caesars, and still maintains a home in Absecon.

He went on to superstar chef status as the charismatic star of the show Dinner: Impossible, where his mission — along with his team of sous chefs — was a series of seemingly impossible culinary tasks with limited resources and the need to improvise on the spot. He continued the theme with his current show, Restaurant: Impossible, where his task is to save an ailing restaurant literally overnight. He also co-stars with Anne Burrell on Worst Cooks in America, which is all about taking terrible home chefs and transforming them into kitchen champions.

Irvine, who last year enjoyed the Atlantic City Food and Wine showcase as a guest of good friend Guy Fieri, will also be attending some of the “meet and greet” events like the Friday Night Chef’s Party from mid-2am at Showboat’s Foundation Room.

In a phone interview with Atlantic City Weekly, Irvine chatted about his trip to town and how he maintains his atypical (for a chef anyway!) weightlifter’s physique.

You’ve spent a lot of years as a working chef in Atlantic City, so participating in the Atlantic City Food and Wine Festival must be like coming home.

I love Atlantic City. I worked there for almost eight years. Atlantic City has always had a special place in my life. I have a lot of friends there in the casino world.

Last year you were at the Festival in an unofficial capacity but this year you are working.

Last year I went because Guy [Fieri] and I are close friends. It was a relaxing time for me because last year’s schedule [with his various Food Network shows] was kind of crazy. This year we’re working at the Festival and it will be even more crazy.

Tell us about your events at the Festival.

I’ll be creating and cooking a meal [the Restaurant Invasion event] and big George [his Dinner Impossible sous chef George Galati] will be joining me. It’s going to be a fun night. A lot of places do dinners and they’re boring, you come in and eat. I can guarantee this won’t be a boring dinner — that’s all I can tell you about it. People know me from television but the local people know that everything I do is topnotch. It’s not just about food, it’s about the whole experience. Fire & Ice is a dessert reception. We’re creating some unusual desserts, hot and cold.

Atlantic City has been gaining traction as a fine culinary destination. How do you think it stacks up against other cities known for their food?

Atlantic City, with the introduction of Borgata, made [the casino industry] think, ‘We’ve got to get our act together.’ The culinary scene is great there with great restaurants, and it will only continue to get better, with the new casino that comes in, Revel. Atlantic City is stacking up great against major food towns, but again, that scene evolves so fast, they’re got to keep up with it.

Do you having any favorite spots you like to visit when you are back in town?

I love the Back Bay Ale House because they do a great steak and it overlooks the water. I love, obviously, going to the casinos. Caesars had been my home for four years. I loved the Bacchanal Restaurant and I loved their steak house. I love P.F. Chang’s at Tropicana. There are a lot of great places.

What have been some of the highlight moments from your shows on the Food Network?

It was an adventure every time I packed my bag and went on the road for Dinner: Impossible. Some of the highlights of Dinner: Impossible over five years — and it’s not done, it will return after Restaurant: Impossible — include seeing and feeding the marines before they went off to Iraq. It was a highlight of my career and sad at the same time. The 50th anniversary of the Air Force, where I got to fly a T-38 Talon jet in Wichita Falls was great. The worst moments of that show was the ice hotel because I don’t like the cold, and a failed mission where it rained for eight hours and I was trying to fish for food and trying to keep cooking fires burning in the forest. Those are the ones that stick out to me. Also, with Restaurant Impossible, it is somebody’s real life and you cannot afford to mess that up. I took that very, very seriously.

Let’s finish up with a non-food question. How long do you have to work out each day to maintain those guns of yours?

I work out just over an hour a day, although it’s difficult when I travel. This job is so stressful. People watch it as television but it is real life. But I love it. Working out is part of my life, part of [keeping me] healthy.