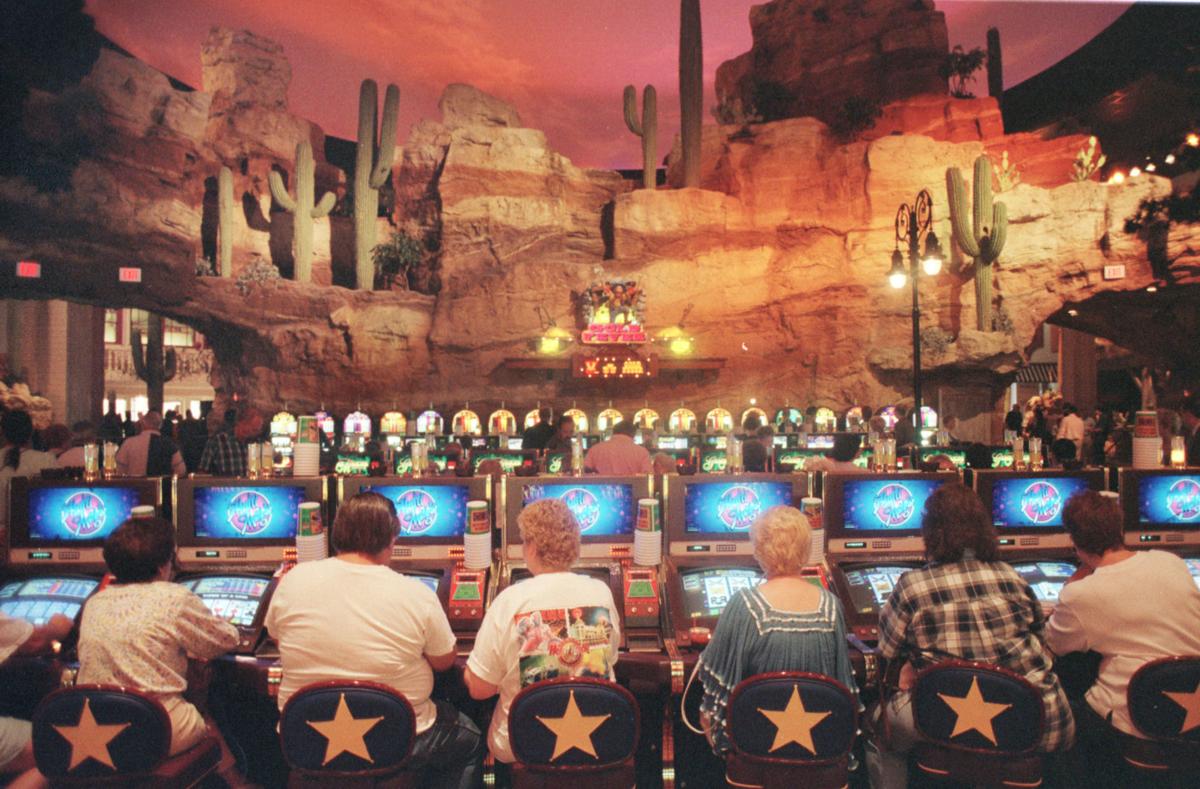 Video poker and slot players try their luck in one of the western rooms at the Wild, Wild West Casino at BallyÕs Park Place for the soft opening to the public July 1, 1997 on the Atlantic City Boardwalk.

Q. Video slots all have bonuses, whether it’s free spins or touching icons on a screen for extra credits. So my question is, why doesn’t video poker have bonuses too?

All that technology that’s in place for slot bonuses is available for poker, right? Poker machines use touch screens. You could touch the screen for bonuses. How cool would it be to have a Jackpot Party like round where instead of wrapped packages you touched playing cards for bonuses, and instead of some packages being poopers some cards could be jokers that would stop the round.

A. Some video poker machines do have bonuses, especially on multiple-hand games.

Powerhouse Poker involves giving you extra hands if you get a winner on the deal. That’s a bonus.

There are more. It seems IGT rolls out new multihand video poker games that include bonus events every year.

The first video poker game with a bonus event that I recall was Reel Deal by Casino Data Systems in the early 1990s. Reel Deal had a set of three video slot reels above the cards Anytime you drew four of a kind, you’d also get a spin of the reels for a chance at an extra payback.

Casino Data Systems no longer exists. Aristocrat Technologies owns the CDS catalog, including Reel Deal, though I haven’t seen the game in a casino in some time.

The majority of video poker players like their games as they’ve always been. Most play is on single-hand games with no bonuses. But for those who like bonus potential, it’s out there on IGT multi-hand games.

The chart said to split if you can double down after splits, but to hit if not. What about doubling down?

A. Assume a six-deck game in which the dealer hits soft 17, since that’s the most common situation today.

With 4-4 vs. 6 , your average hand will be a winner as long as you don’t make the one really bad play and stand on 8. If you stand, your average loss is 11.6 cents per dollar wagered.

If you are allowed to double after splits, the best play of all is splitting the pair. Your average profit when splitting is 20.3 cents per dollar of your original wager.

But if doubling after splits is not permitted, your average profit when splitting plummets to 5.4 cents per dollar of your original wager.

Those double-down possibilities makes splitting 4s a strong play. When that opportunity is taken away, you’re far better off with a hit.

Running the numbers on splitting pairs

Video poker and slot players try their luck in one of the western rooms at the Wild, Wild West Casino at BallyÕs Park Place for the soft opening to the public July 1, 1997 on the Atlantic City Boardwalk.