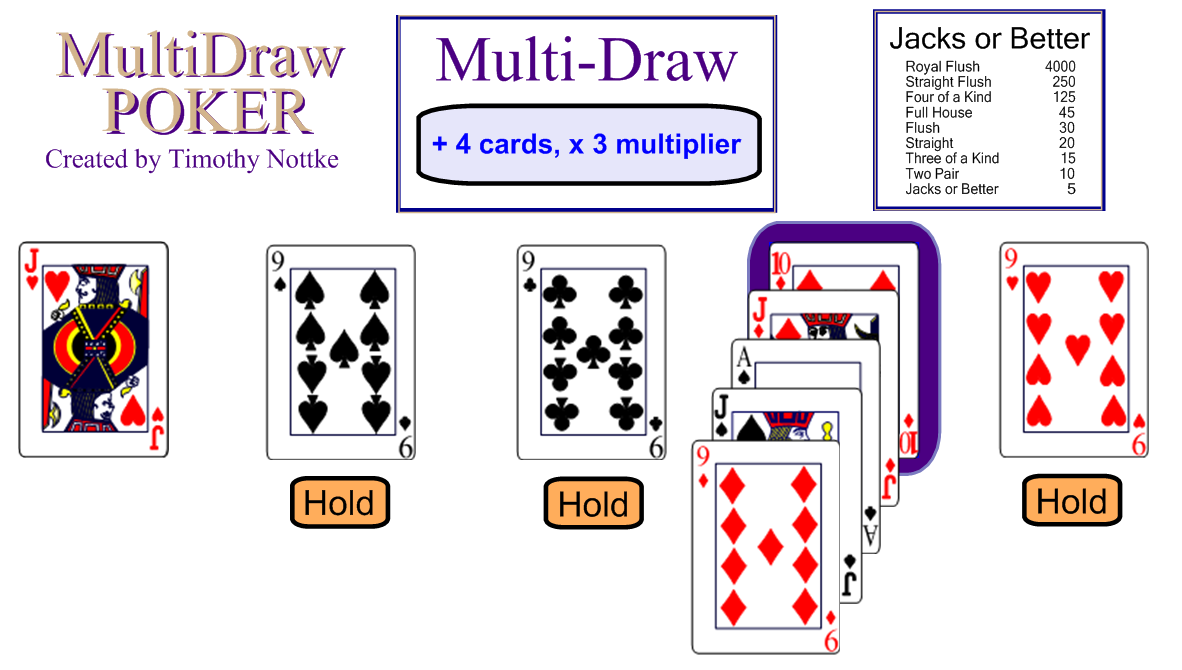 A couple of years ago, I wrote about Multi-Draw Poker, a video poker game developed by Tim Nottke for Realize Gaming LLC.

The game was a niche success, Nottke is back with a new creation, Trade N’ Place Poker, and you can check out a demo version at https://www.realizegamingllc.com/demo/tradeNPlace3x1/?fbclid

Trade N’ Place isn’t the five-card draw that you find in nearly all video poker games. It’s a nine-card game with three rows of three to make three five-card hands.

Here’s how it works.

Cards include those in a standard deck plus one card with a stylized “N” that has an up arrow at top right point and a down arrow at the bottom left.

If an “N” card appears when cards are dealt in a 3 x 3 matrix, that signals a swap opportunity.

The “N” card, dealt on 48.3 percent of hands, flips to display a regular card. Then the machine asks you to choose trade or no trade. To trade, click on two cards, then hit the trade button.

After you’ve made or declined a trade, another card appears toward the left side of the screen. That’s a replacement card – you touch a card in your hand to discard, then click on “Place,” and the replacement appears in the designated spot.

Let’s try a sample hand before checking what happens in hands with no “N.”

I was offered a Queen of hearts as the replacement card. I clicked the 4 of clubs, leaving me with three hearts for a middle-hand flush.

What if there is no “N” on the deal? Then you’re offered two replacement cards.

Smaller pays won’t get your money back. You want to create opportunities for three of a kind, straight flushes and royals. With expert play, the demo pay table returns 99.43 percent.

I found the game fun and intriguing with its trade and replace opportunities. Just bear in mind that using your trades to create big-pay opportunities is part of the game.