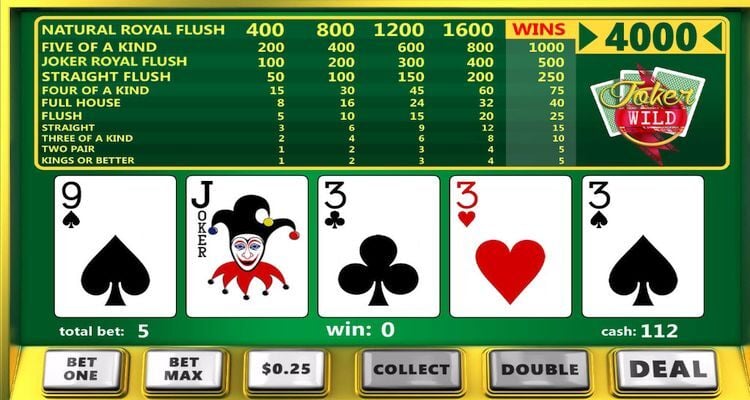 A regular reader emailed recently to ask about a couple of Joker’s Wild strategy points, and specified Kings or Better. A pay table was not specified, so I used these payoffs for a five-coin bet as a starting point: Natural royal flush 4,000, five of a kind 1,000, royal flush with Joker 500, straight flush 250, four of a kind 85, full house 35, flush 25, straight 15, three of a kind 10, two pairs 5, pair of Kings or Aces, 5.

Average return is 98.09 percent with optimal play, and it’s the kind of game you might actually find in a casino. There are higher and lower paying versions. Several pay in excess of 100 percent, but they’re extraordinarily rare in today’s casinos.

You get the picture. Your mileage may vary, but let’s use a middle-of-the-road pay table to look at the strategy questions the reader posed.

Reader’s comment: “I see two reasonable plays here. I can hold the 10d and Qd only.

The reader’s feeling was spot on. The two best plays for this hand is to hold the suited 10-Queen or to discard all and go for a redraw.

Which is better? Holding the 10 and Queen. It’s not a great option because pairs of Queens are not paying hands in this game. The average return of 1.79 coins per five wagered is well below the 2.49 you’d expect for the same hold in 9-6 Jacks or Better.

Still, the draw will bring enough winners, including rare royal, that even the sparse return for holding 10-Queen is better than the 1.65 on a redraw.

If the initial draw brought a King instead of a Queen, this would be nowhere near a close call. The possibility of pairing the King for a paying hand brings the average return on 10-King up to 2.39 coins per five wagered.

This is a dilemma familiar to players in all video poker games. Do you hold three to a royal or four to a flush?

This is complicated by the possible royal including a Joker. That means the upside is a 500-coin pay, not the 4,000-coin bonanza for a natural royal.

Is that enough of a payback to make it worth holding three to a Joker royal instead of four to a flush?

The average return per five coins wagered is 8.89 coins if you hold Joker-10-Queen of hearts and only 7.78 if you also hold the suited 4.

Average pays would be higher but the gap narrower if the Queen was a King. Then every hand is a winner with the King pairing the Joker. That boosts Joker-10-Queen, to an average of 10.17 coins, but that’s only narrowly better than the 10.10 For Joker-10-Q-4. .