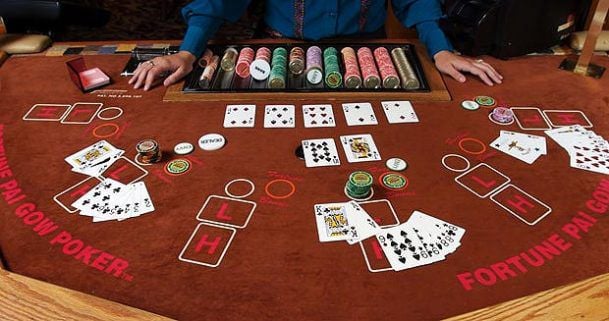 Blackjack Bob and I found ourselves at different tables at the same casino recently. It was pure chance, but we took the opportunity to have lunch together.

As usual, the conversation went off on a few tangents, but one of them involved top payouts and their frequency at different casino games.

“You’re dealt a blackjack about once per 21 hands,” Bob said. “That’s one of the happier coincidences in gaming, I think.”

I nodded and let him go on.

“That’s probably the most often you get the top payoff in any casino game. Of course, it only pays 3-2.”

“Anyway, blackjack isn’t a jackpot chaser’s game. Really big pays for a single win come a lot less often. Just for something to do, how about we rank the games you see a lot in how often the top payoff comes?”

I pulled a pen out of my pocket and grabbed an extra napkin. Strictly low tech. Then we started a list of common casino games by frequency of top payoff, regardless of house edge.

Slot machines weren’t available. Every game has its own jackpot frequency, and the precise odds often aren’t available to the public. There’s about a 1 in 55 million chance of hitting the multimillion-dollar progressive on Megabucks, while three-reel Blazing 7s, with a $1,000 progressive base for a $3 wager, is closer to 1 in 4,100.

Video slots, with more of their returns on small wins and bonus events, are in between, often with top jackpot odds in the low millions-to-1.

But on table games and video poker, jackpot odds are known. Sticking to games that are at least fairly widespread, Bob and I came up with this list.

1 in 649,740: Royal flush in Mississippi Stud, Caribbean Stud, Let It Ride and other five-card stud-based games. (“Mississippi Stud is the only one I see anymore,” Bob said. “The others seem to have had their day.)

Payoffs vary by game, with a 100-1 return on Caribbean Stud, 500-1 on Mississippi Stud and 1,000-1 on Let It Ride. Dedicated jackpot chasers can try high house-edge side bets such as the $1 progressive at Caribbean Stud, where jackpots are seeded with at least $10,000.

1 in 38: Single-number bets in roulette. Payoffs are 35-1, while true odds are 37-1. The situation is fundamentally different than in Missisippi Stud or video poker. In those games, you can win your bet without getting the top payoff. In roulette, you win the bet or you don’t, so payoffs don’t have to account for smaller winners.

“Don’t list pai-gow,” Bob said as I started to ink in another line. “There’s no top payoff if every win is the same.”