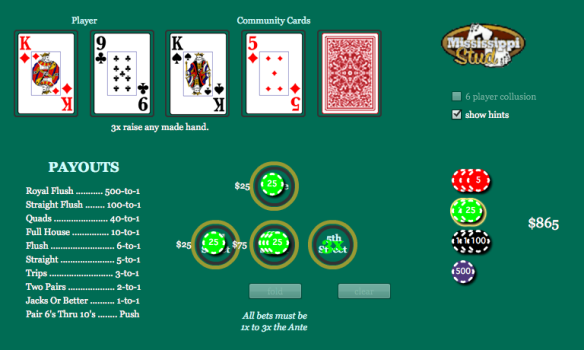 Q. I had something happen at a Mississippi Stud table I thought would make a fun story to tell your readers.

There were only two players at the table, me in the middle and a woman on the end to my left. The casino had a limit of three players per table, so there was one spot not being used.

She was dealt a pair of 6s and tilted them to ask the dealer, “What should I do with these?” I could see too, and could see the dealer didn’t really want to answer, so I said, “You should make the maximum bet. In fact you should bet the max all the way through.”

She said, “Even though these just push? Shouldn’t I just bet one?” I told her that she could improve the hand on later cards. Right now it was just a push, but it couldn’t lose, the least she could do was get her money back, and if the hand got better she could win more.

Next card was another 6. She let out big “Yes!” and told me she’d high five me if that was allowed. She bet another $30. That was all the chips she had, so she started digging in her purse.

The next card was a Jack, and she hadn’t found any money. She asked if she could just stand and the dealer told her she had to bet or fold, but he’d wait a minute. I volunteered, “How about if I make the last bet?”

That’s what we did and that was OK. There was no risk on my $30. Getting $45 in winnings was free money, and she had a lot more chips after that hand.

A. Thank you for sharing. In games with multi-part bets, players should make sure they have enough money to cover all eventualities. Starting with a $10 ante in Mississippi Stud carries the possibility of $100 in total wagers, and you need to make sure you have enough to cover that final bet.

Q. Why does the house has an edge in blackjack? It seems like the cards would have equal chances of be dealt to players as the dealers. Players can decide how to play while seeing a dealer card, while dealers have to play every hand the same way. Players get extra payoffs on blackjacks, and they can split pairs and double down, which dealers can’t.

With all that in the players’ favor, why does the house win.

If you bust and the dealer busts, the hand isn’t a push. You don’t get your money back. You lose.

An 8 percent house edge would make blackjack unplayable for smart players. The factors you list as favoring players are compensating factors to reduce the edge enough the people will risk their money at the tables.

Watch your speed on video blackjack

More on ticket printers and that dirty money