The four-piece Spafford band will be one stage at Wild Wild West in Caesars on Saturday.

The five-man Fresh Socks band will appear at The Park at Ocean Casino Resort on Friday, Saturday and Sunday. 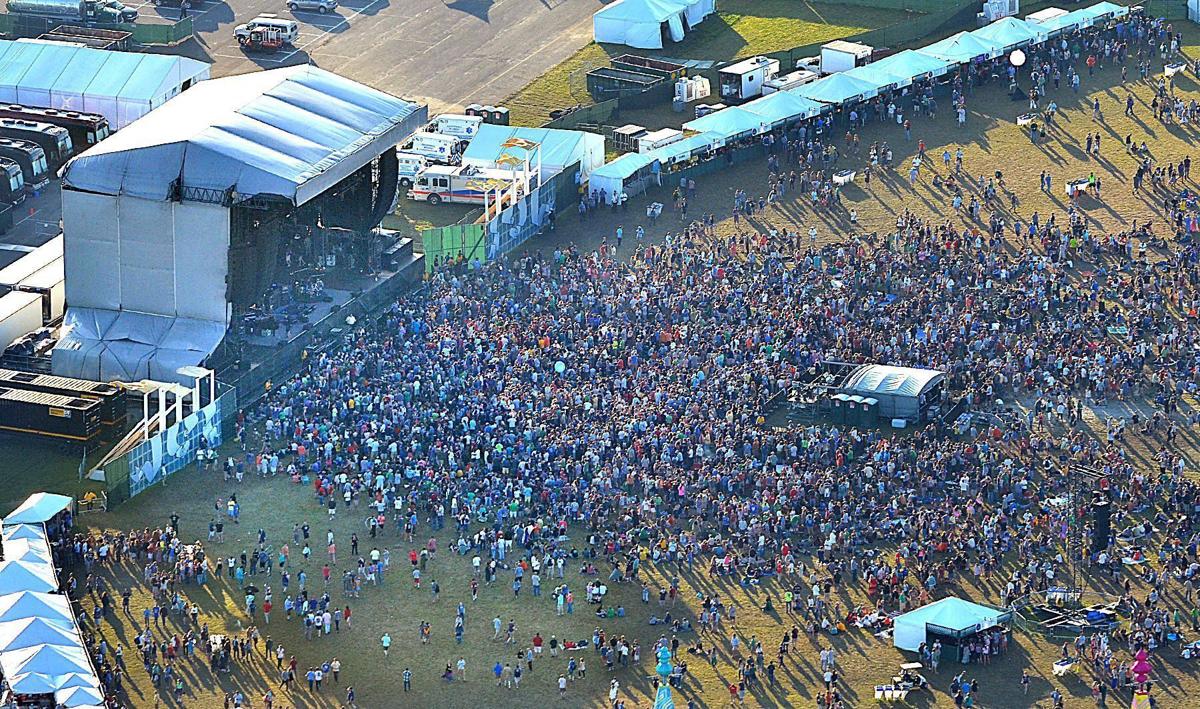 Phish is expected to draw more than 30,000 fans to the Atlantic City beach, just like they did when they performed at Bader Field in 2012. 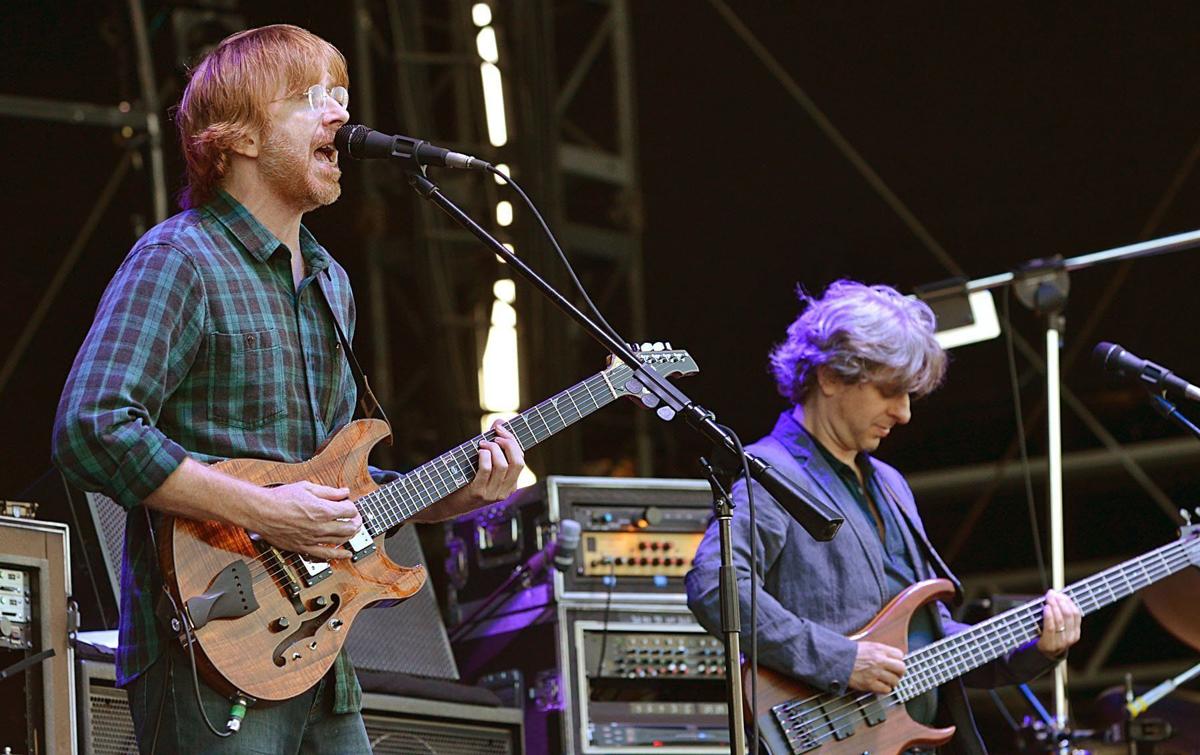 Trey Anastasio, left, and Mike Gordon, seen here performing at Bader Field in 2012, return with Phish on the beach in Atlantic City this weekend. 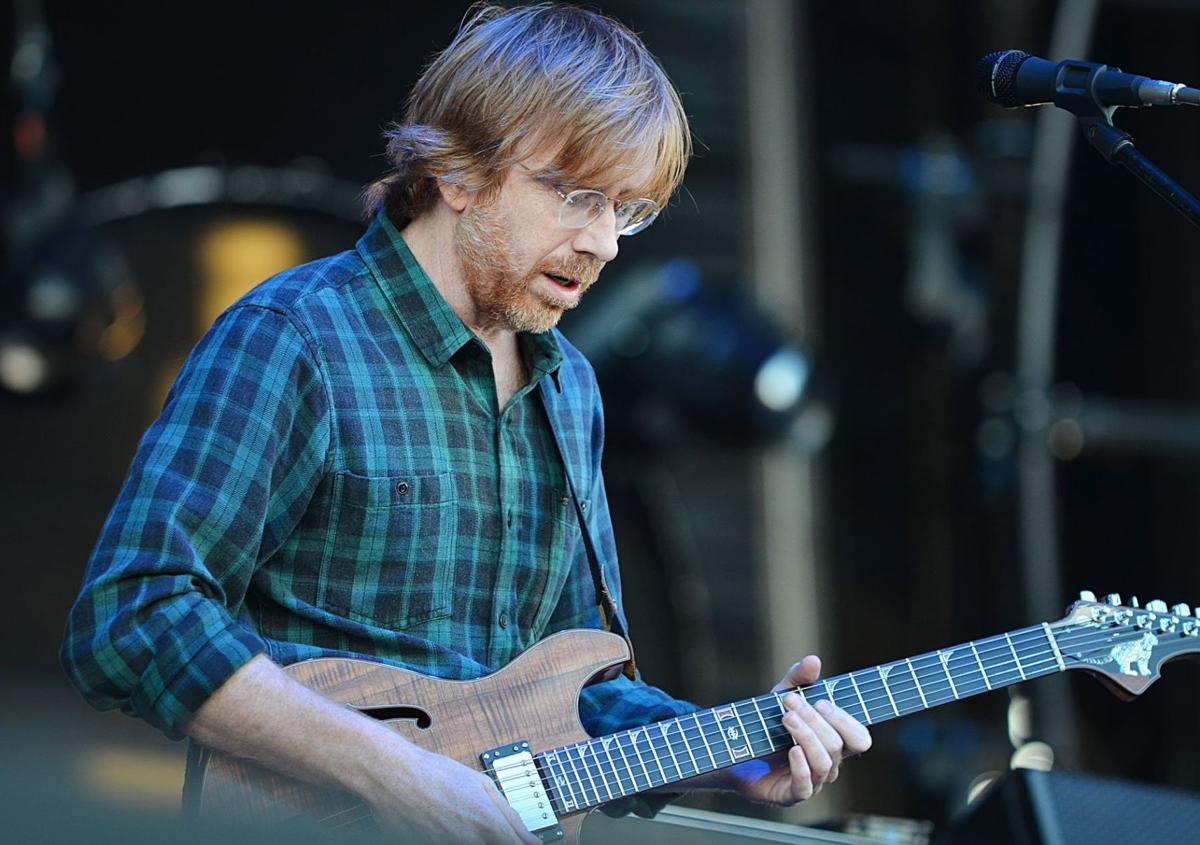 Phish frontman Trey Anastasio rips into a solo when he performed at Bader Field in 2012.

Like the late, great boxer Arturo Gatti, who loved Atlantic City like his hometown even though he hailed from elsewhere, the Vermont-based jam-band phenomenon Phish seems to hold a special place in its heart for the resort town.

Featuring guitarist and principal songwriter Trey Anastasio, bassist Mike Gordon, drummer Jon Fishman and keyboardist Page McConnell, Phish will be making its fourth appearance in A.C. since 2010, with each prior engagement resulting in multiple sold-out shows on back-to-back nights.

This year’s appearance — rescheduled from last summer due to the pandemic — takes place for the first time on the beach, with shows starting 7:30 p.m. Friday, Saturday and Sunday, Aug. 13 to 15. Demand for tickets has again been rabid among the Phish fanbase.

The mutual appeal is reflected in more than just ticket sales, however. Two of Phish’s prior Atlantic City appearances — both over three-night gigs — overlapped their longstanding, legendary Halloween concerts, which had not happened twice in the same city since the tradition began. Their other two-show resort series was at Bader Field in June 2012.

The band’s second A.C. trilogy of Halloween shows — in which Phish typically puts personal spins on classic albums by other artists, such as “Exile on Main Street” by the Stones or “Quadrophenia” by the Who — included something unprecedented when a slew of nearly all new songs got played in Atlantic City. Some of that material, recorded at James Whelan Boardwalk Hall, was released the following year on Phish’s “Fuego” album.

Anastasio, who is originally from Princeton, also recorded a live solo album in Atlantic City in the now-defunct House of Blues, and he opened as a soloist for Neil Young at Borgata during a Hurricane Sandy benefit concert in 2012.

Phish parallels what is widely considered the greatest jam band in American history, the Grateful Dead, in many ways, and in its early days as little more than an uber-talented Vermont garage band, performed a lot of Dead material in shows. Gradually, and with Anastasio’s exceptional and prolific songwriting ability, Phish gained a completely different identity from its West Coast forebearers.

Phish never plays the same setlist twice, which mirrors the Dead. In a pair of shows at Nashville’s Ascend Amphitheater on Aug. 3 and 4, not a single song got repeated from night to night. Phish encourages the free sharing of its music among fans, as the Dead did, although now in a more high-tech, file-sharing design than the Dead flock’s bootlegged cassettes. And like Deadheads, Phish has a nomadic legion that follows the band from town to town.

Phish is far more quirky than the Dead ever was, however, as evidenced primarily by the somewhat bizarre Halloween shenanigans that has thousands of fans wearing costumes to each show. In their last Atlantic City appearance, a dancer dressed in a wombat costume joined the band members on stage during the song “Wombat.” The person inside the wombat costume was subsequently revealed to be then 92-year-old actor Abe Vigoda, whose name is mentioned in the song, and who starred in a sitcom spinoff called “Fish” in the 1970s.

“The unpredictable is part of the appeal of this band,” bassist Gordon told Atlantic City Weekly in a 2010 phone interview. “That makes it fun for the fans and those who are in the band. We do things a little differently than other bands — we’ve always liked to play many different types of music. It makes it interesting for us.”

In their 1997 official biography “The Phish Book,” penned by the four members with writer Richard Gehr, Anastasio coined the term “cow funk” to describe the band’s jazz-funk influences at the time.

“What we’re doing now is really more about groove than funk,” Anastasio was quoted as saying. “Good funk, real funk, is not played by four white guys from Vermont.”

Where: On the Atlantic City beach, across the boardwalk from Caesars and adjacent to the Playground Pier. The concert’s main entrance will be off the Kentucky Avenue beach entrance.

How much: Tickets, priced at $79 per person per show, or $237 for a three-day pass, are available through Ticketmaster.com

Orange Loop mainstay Tennessee Avenue Beer Hall will have Phish-themed bands the Friday and Saturday nights following the beach concerts, and another the night before Phish even gets there in their gorgeous, outdoor Beer Yard. Uncle Ebenezer is a quartet known as the northeast region's top Phish tribute act. The band performs in the Beer Hall's beer garden from 9 p.m. to 1 a.m. Thursday, Aug. 12. Tickets are $15 in advance and $20 at the door, if available. On Friday night, Aug. 13, following Phish's first show, a band called Tractorbear will take the beer garden stage from 11:30 p.m. to 3 a.m. Tractorbear is billed as the region's best-known tribute to the Disco Biscuits, a popular Philly-based jam band comprised of former Penn classmates. Tickets are $15 in advance and $20 at the door, if available. As its name might imply, the Cosmic Jerry Band dedicates itself to all things Jerry Garcia, from the late legend's 30-year history of fronting the Grateful Dead to his various side projects, such as the Jerry Garcia Band and New Riders of the Purple Sage. The band starts 11:30 p.m. Saturday. Tickets are $15 in advance and $20 at the door, if available. The Beer Hall will also offer two free jam band concerts. On Friday, Aug. 13, the Dead Reckoning Duo will perform a free, pre-Phish show 3 to 7 p.m. offering superb covers of The Dead and more. Then, a free jam band concert with Philadelphia's Riko & Whaler Collective will take place 7 to 10 p.m. Saturday for those who might have tickets for another day or just can't get into Saturday's show. Riko and the gang will play covers of the best-known jam bands on the planet. In addition to music, the Beer Hall will please those craft-beer-loving Phish fans with 40 taps of brew, including many from Phish's home state of Vermont, including a tap takeover from Lost Nation Brewing, Lawson's, Fiddlehead and more. And The Source Farmhouse Brewery may be from New Jersey, but they are huge Phish fans and will brew a special Phish-themed beer only available at the Beer Hall. The Beer Hall is at 133 S. Tennessee Ave. in A.C. Go to TennesseeAvenueBeerHall.com

As one might imagine, Absecon Island and its environs will abound with Phish-related activities both before and after each of the band's three beach concerts. Here are a few options to check out for folks who simply couldn't satisfy their appetites for Phish.

The Sippy Cup Kids are a trio from Philly featuring two singer/songwriter/guitarists joined by a djembe drum player. The band will jam at Ventnor's Enlightened Café from 2 to 4 p.m. Saturday, Aug. 14, as a tune-up to Phish's show that night. The free show will include Sippy Cup Kids' originals and covers of rock, jazz, folk and bluegrass. The Enlightened Cafe is at 6414 Ventnor Ave. in Ventnor. Go to EnlightenedCafe.org

The band Lettuce keeps the party going 11:30 p.m. Saturday, Aug. 14, at Hard Rock's Sound Waves theater. The Grammy-nominated, six-piece band plays strains of hip-hop, rock, psychedelia, jazz and soul. Along with a guitar, bass and drums, the band blends saxophone, trumpet, clavinet and keyboards into certain songs. Tickets are $39.50 and available at Ticketmaster.com. Go to HardRockAtlanticCity.com

The five-man Fresh Socks band will warm up the Phish crowds with three free pre-concert shows starting 2:30 p.m. Friday, Saturday and Sunday, Aug. 13 to 15, at The Park at Ocean Casino Resort. The band does covers of the Grateful Dead, The Band and other retro roots-rock groups that spawned such latter-day marvels as Phish. Go to TheOceanAC.com

The Anchor Rock Club's much-anticipated opening was waylaid by the pandemic, but the New York Avenue club is ready to rock with three shows starting 10 p.m. each night of Phish weekend. Orchard Lounge is a trio of Chicago house DJs that will get things going Friday night along with jazz, hip-hop turntablist DJ Logic. The cover is $20. Saturday's show is headlined by Project Logic with special guest Vernon Reid, guitarist for the New York City-based funk/jazz/hip hop/punk-blending band Living Colour. Admission is $22. On Sunday at Anchor, the headliner is Dogs In A Pile, an Asbury Park-based quintet heavily influenced by Phish that blends psychedelia, jazz, fusion and funk with classic rock. Sunday's show is $15. Guests must be at least age 21 to attend these shows. Anchor Rock Club is at 247 S. New York Ave. in A.C. Go to AnchorRockClub.com

Pink Talking Fish hails as a hybrid tribute act that blends the finest material from three of the world's most beloved bands - Pink Floyd, the Talking Heads and Phish. The show starts midnight Saturday, Aug. 14, at the Tropicana Showroom. Tickets are $24.50. Go to Tropicana.net

Ghost-Note is a seven-piece band that plays 11 p.m. Friday, Aug. 13, at the Wild Wild West in Caesars. According to its website, Ghost-Note "pushes funk music into the future" by building on the pioneering foundations of James Brown and Sly & the Family Stone and infusing sounds of afrobeat, hip-hop, psychedelia and folk. The four-piece band Spafford starts 11 p.m. Saturday at the Wild Wild West. Spafford is known for an exceptional improvisational ability and off-the-cuff extended jams, a la Phish. Both shows are free. Go to Caesars.com/Caesars-AC

Get Phish fix at the 'Boat

A slew of free shows at Showboat Hotel will focus on Phish's A.C. arrival, as Showboat's Spirit Bar sandwiches early and late bands around both of Phish's beach concerts Saturday and Sunday. The festivities first kick off 11:30 p.m. Friday, when the band Funk You takes to the Spirit Bar stage. The nine-piece, horn-heavy ensemble from Augusta, Georgia "places a healthy helping of soul atop a funky backbeat." The show is free to all paid (priced $35, $45 and $55) ticketholders to the Cory Wong concert starting 11 p.m. Saturday, Aug. 14, at Showboat's Bourbon Room; or any of the three Jerry Dance Party shows ($15 per person per show) at the Foundation Room. The dance parties start 11 p.m. Friday, Saturday and Sunday. All Cory Wong and Jerry Dance Party tickets grant guests entry to the 4 p.m. Dude of Life Band and 11:30 p.m. Garcia Peoples bands Saturday at Showboat's Spirit Bar; and the 4 p.m. Waiting on Mongo and 11:30 p.m. Mystic Bowie's Talking Dreads show Sunday at the Spirit Bar. Go to ShowboatHotelAC.com

5 reasons to head to Piggin’ Out on Tennessee Avenue

If you’re of the mind that bacon is the greatest thing ever to be had on this planet — and honestly, who isn’t? — then you’ll want to prepare …

The four-piece Spafford band will be one stage at Wild Wild West in Caesars on Saturday.

The five-man Fresh Socks band will appear at The Park at Ocean Casino Resort on Friday, Saturday and Sunday.

Phish is expected to draw more than 30,000 fans to the Atlantic City beach, just like they did when they performed at Bader Field in 2012.

Trey Anastasio, left, and Mike Gordon, seen here performing at Bader Field in 2012, return with Phish on the beach in Atlantic City this weekend.

Phish frontman Trey Anastasio rips into a solo when he performed at Bader Field in 2012.