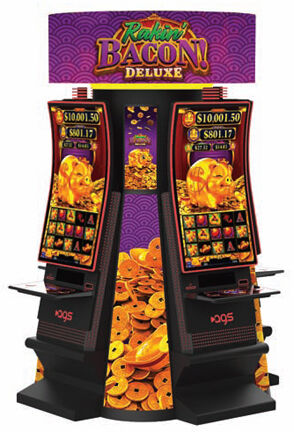 New slot games debut all the time, with hundreds getting trials every year.

Let's take a look at a few recent additions to casino floors. Rather than the very newest, they're games that have had a chance to reach multiple outlets and jurisdictions.

There's never a guarantee that players will add a game to their favorites, but these have features worth a look.

Each game has its own free spin bonus. In a Pirate Plunder round of at least 12 spins, landing harpoon symbols adds rows of symbols to bring more chances to win. In Golden Blessings good luck symbols add more rows, and if you reach the maximum eight rows and 16,807 ways to win, you also win eight more spins.

As for the progressives in either game, you pick from a field of 12 Cornsquealious images, each hiding a progressive level. When you match three, you win the corresponding jackpot — Mini, Minor, Major or Grand.

That's the same mechanic used in the original game, but in the Deluxe games, some jackpot icons are emblazoned "BOOST." Land a "boost" among your winning icons, and your jackpot is boosted by its starting value. For example, if you're playing for pennies, the starting value of a Minor jackpot is $25. Imagine the pot has grown to $38, and you match three Minor symbols, with one carrying the "BOOST" legend. Then $25 is added to the pot and your win is $63.

Monopoly Cheaters Edition, Scientific Games: Monopoly slots have had a great run ever since WMS Gaming brought out the original editions in the late 1990s.

Monopoly Cheaters edition is great fun — doubly to board game players who have been tempted to nudge the dice to a different number. Not saying that you'd ever do such a thing in a friendly game, of course, but if you've ever landed on Boardwalk with another player's hotel, you know the fantasy of a switcheroo is there.

Here, cheating is not only condoned, Mr. Monopoly will help you along.

In a five-reel game, you know it's cheat time when Mr. Monopoly lands on the first reel. A siren sounds and Mr. Monopoly spins the playing field end over end to add whole stacks of wilds, or he'll reject a losing spin shake the field and clone reels to give you winning matches.

Other times Mr. Monopoly might bang his hand on top of the reels so old symbols fall off to be replaced by better ones or wave his magic hat over the reels to upgrade symbols.

After any cheat, he might also reach into his coat and grab some extra cash to drop onto your meter.

There are separate cheats for a Monopoly board bonus. When you reach the bonus, you pick an icon to determine how many dice rolls you get. Mr. Monopoly might help on the sly. If you're awarded three rolls, Mr. Monopoly might rewrite that for a bigger total.

As you move on the board, sometimes Mr. Monopoly will lose count in your favor, and you might move extra spaces to a more valuable property.

What you see isn't always what you get, but the discrepancies are in your favor.

Sagittarius season is a time to get out of our comfort zones and explore new horizons. This week, be curious like a child and find new adventures.

Average results need boost for profit on craps bet on 12

An entrepreneurial sort since his teens, Lou Reichert’s vision of opening an intimate live-music venue in Tuckerton, and presenting talented a…

When goofs at games happen, a little luck can go a long way

In the spring, I wrote about Brady, a Deuces Wild video poker player who had a brain cramp.

5 Places to Party on Thanksgiving Eve