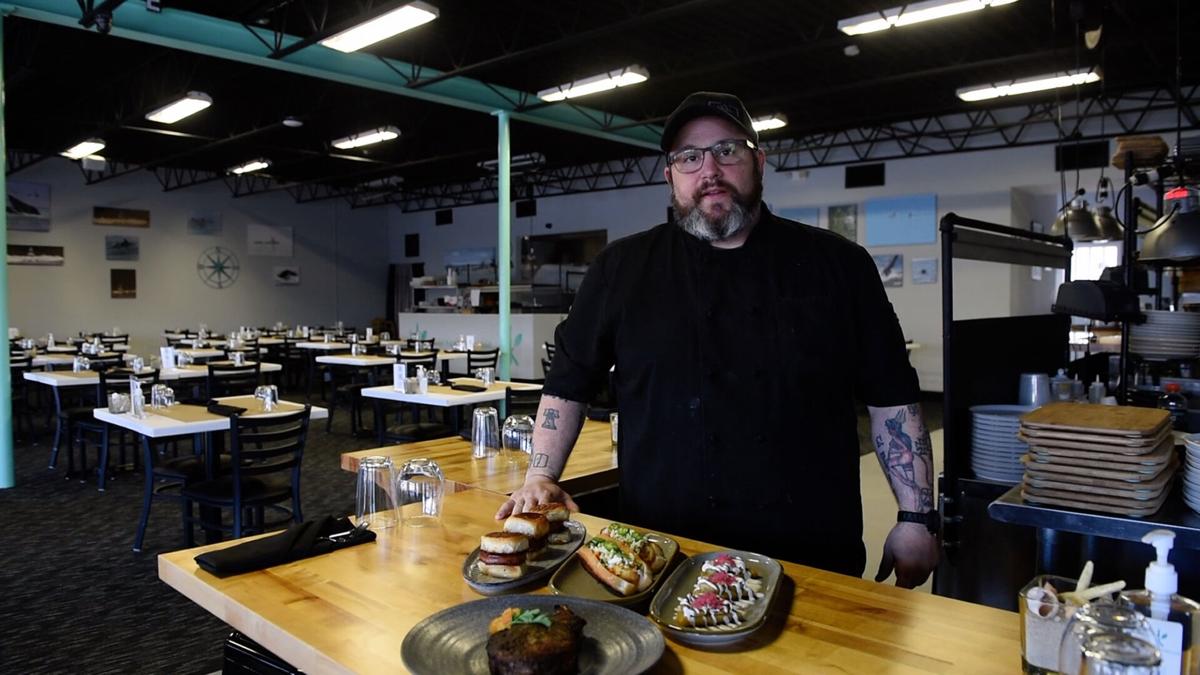 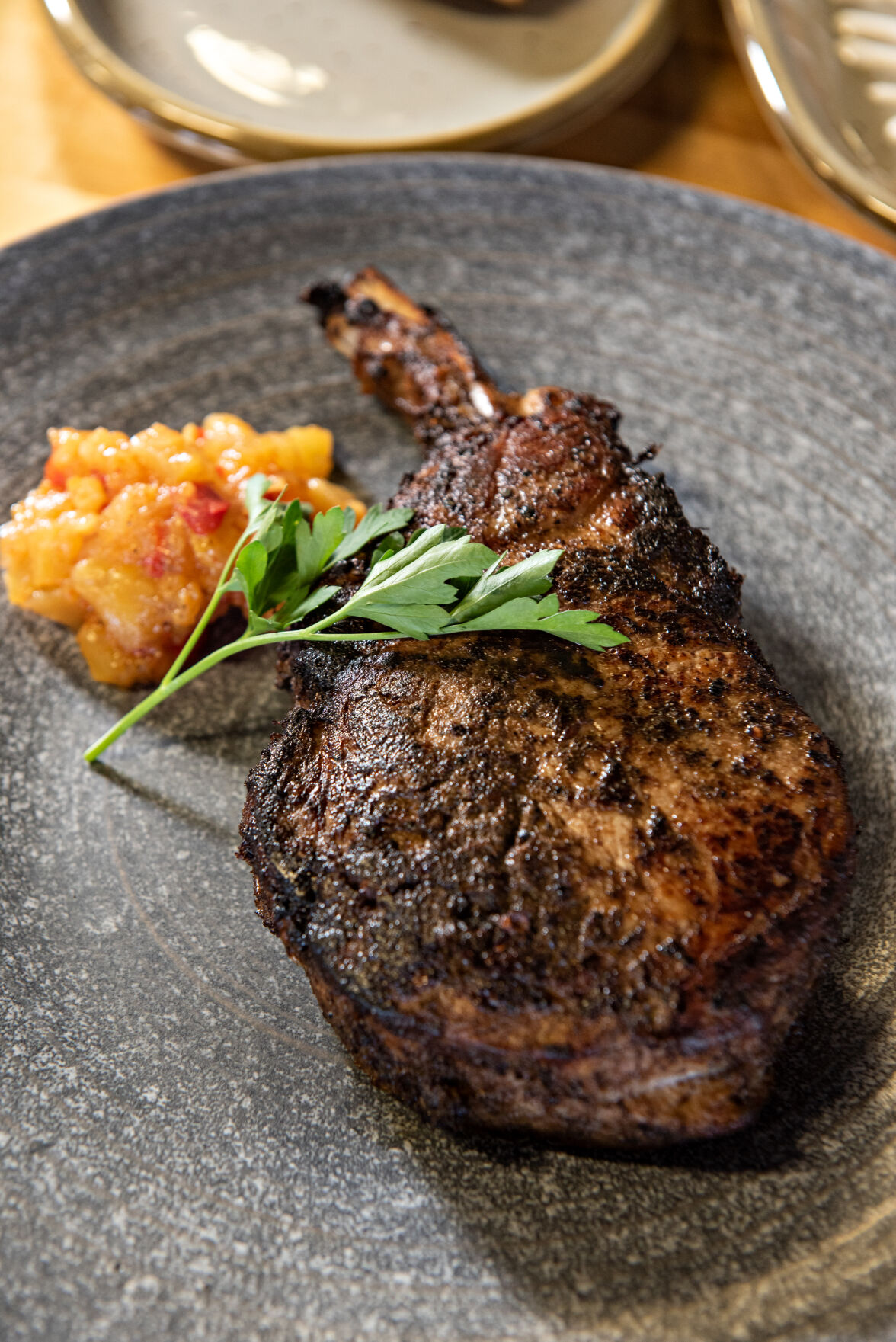 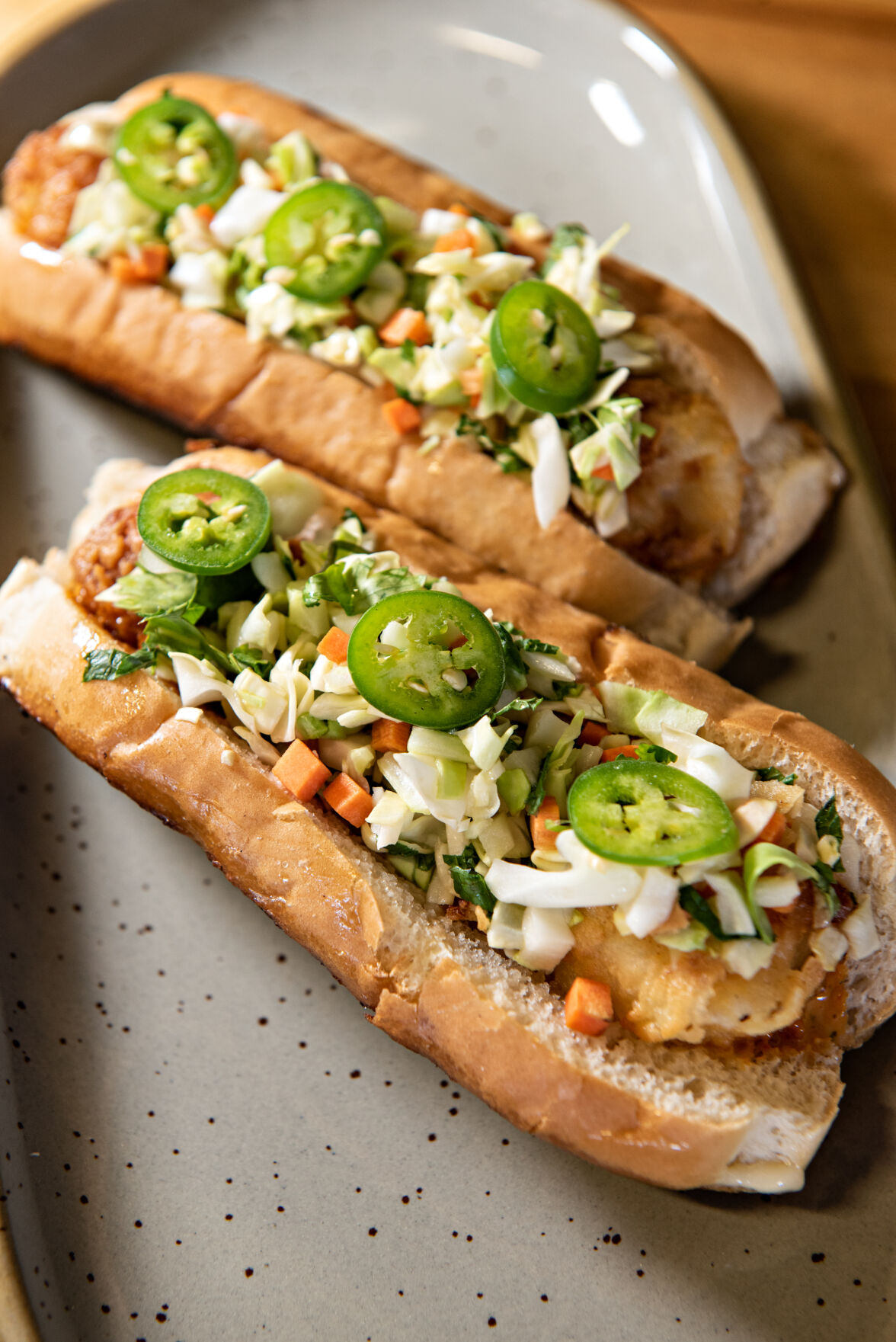 Fried mortadella sliders, top, were a standout on Trio’s menu, and the scallop roll, below, is a playful twist on the more traditional lobster roll. 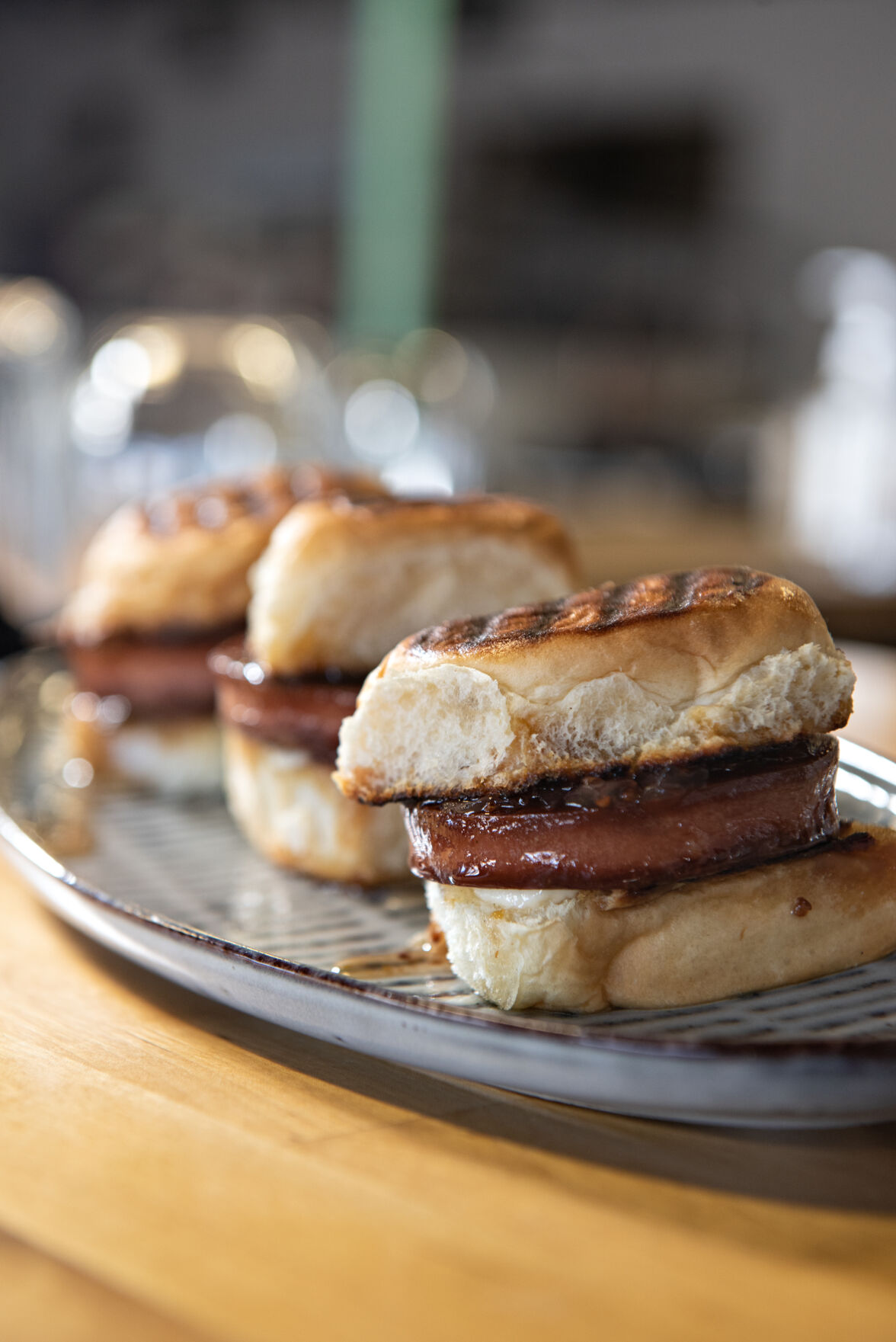 The talented chef’s culinary journey started on a 1500-acre farm in Bucks County, Pa., where he grew up in a true farm-to-table experience, grabbing eggs from his family’s chicken coop and making himself breakfast while standing on a milk crate.

Destined to be a chef, Zimmerman’s travels have included 15 years in New Hope, Pa., particularly at The Raven, where he worked under award-wining Chef Edward Jankowski, before finding Atlantic City, where he became chef at Morton’s the Steakhouse and executive sous chef at Bobby Flay Steak. He even took a left turn and partnered in a tequila and tapas restaurant in Dallas, Texas, before returning to the shore, helming the kitchen at the former Marie Nicole’s in Wildwood Crest.

That return to Cape May County also seemed like destiny … where Zimmerman’s heart belonged, tracing all the way back to spending every summer in Cape May with his grandparents.

Opportunity knocked in 2018, when he partnered with his cousins Paul and Debbie Gioquindo to open Kitchen 330, an intimate, farm-to-table experience in Stone Harbor that showed off his gourmet techniques to 40 people at a time.

The trio – hence the name of their new eatery in North Wildwood – soon realized 40 seats was not enough and they wanted to own their own building, eventually finding and settling on the former Amish Market on New Jersey Avenue that now houses Trop North Wildwood, which opened this spring.

“We sat back after closing Kitchen 330 and knew we still wanted to do business together because the three of us make a great team,” says Debbie Gioquindo, who runs the front of the house. “We didn’t own the building in Stone Harbor, and then we found the Amish Market. It was in our price range, and then a month later it was ours.”

“It was our destiny to be here,” Zimmerman says. “We were meant to be here.”

Since purchasing the building Trio underwent a substantial renovation that included adding roll-up garage doors to make the industrial space more open while equipping its two open kitchens to accommodate the 120 seats – including outdoor seating – a far cry from the 40 seats in Stone Harbor. They are still waiting for the cool lighting that will soon transform the space … problems in a pandemic world.

“In this concept, we wanted to get somewhere in between what the high-end food was (at Kitchen 330) and bar fare,” Zimmerman says. “I have been doing this for 28 years, so I have taken some of my greatest hits along the way while adding some new creations. It’s global cuisine … eclectic fare but in the confines of American cuisine.”

The American gastropub experience minus the pub — it’s BYOB — certainly bridges the gap between bar fare and fine dining.

For Kitchen 330 fans, Zimmerman brought some of his more popular dishes from there to Trio, even if they are slightly revised.

The popular prime pork chop ($29) features a Jamaican jerk rub with pineapple jam; the melt-in-your-mouth Butcher Steak ($29) is a grilled Durham Ranch Kobe Denver steak with chimichurri; and the grilled meatloaf ($25) with house steak sauce features a larger portion and has a more approachable plating than its previous incarnation.

“I think the meatloaf was served a little smaller and with black lentils or something at Kitchen 330,” Zimmerman says. “But here it’s basically the same recipe. The butcher steak is called that because butchers would take the Denver steak from the shoulder and the hanger steak home with them because they were the best-kept secret of the animal.”

Some of the stellar gastro fare includes Shanghai Street Wings ($15); a “chef’s burger” ($16) using a quality short rib and brisket mix with Muenster cheese and served with rosemary parmesan fries and garlic mayo; a cool take on traditional sliders using fried mortadella ($14) with red onion mostarda that was one of our favorite dishes; and the truly scrumptious mussels ($12) removed from their shells and put in a soup-worthy Belgian butter sauce, where they swim among french fries for some truly memorable goodness.

Other standouts include a rotisserie chicken pot pie ($23) with potatoes, carrots, pearl onions, peas and fennel that would have made the former Amish owners very happy; and a Saigon fried chicken sandwich ($15) that Zimmerman says would compete with any restaurant in the current fried chicken wars. Trio’s version is a take on the Vietnamese banh mi sandwich with hot honey, cilantro, pickled carrots and cucumber, sriracha mayo and fries.

Farm to table cooking Zimmerman certainly has not lost his passion for farm-to-table cuisine on the Trio menu.

Like any good Jersey shore restaurant, seafood plays a major factor at Trio with some really inventive dishes.

The scallop roll ($16) replaces Zimmerman’s original idea to do scallop tacos by searing some scallops and serving them with Thai mayo and vinegar slaw on a buttered split top roll — just like you would a lobster roll. And the interestingly named clamboat flatbread ($14) features flatbread hand-tossed and baked in house topped with a seafood bechamel, slow-roasted pork belly and caramelized onions.

For entrees, check out the miso-marinated white fish ($28) with lentils, fennel, carrots and asparagus over a wild rice blend; the pan-roasted swordfish ($28) with tomato, dill, olives and capers; and the combination shrimp and crab cake ($27) with cornichon and caper tartar sauce.

Trio also makes all of its desserts ($10) in house, including the amazing snickerdoodle ice cream cookie, a custard with blueberry ganache, cardamom carrot cake and a homemade chocolate brownie with caramelized cream.

Want wine with that?

Although Trio is BYO, the restaurant does sell Dracaena Wines from Pasa Robles, Calif., which holds a non-New Jersey winery license to permit the sales.

This fits right in with Paul and Debbie Gioquindo. Paul, an engineer and former winemaker, and his wife Debbie, a fellow wine expert and wine blogger, take their wines very seriously.

In fact, Debbie Gioquindo will offer diners advice on wine pairings in person or on the Trio website.

“When people ask me for recommendations, I always help,” she says. “But we are really happy to have Dracaena Wines here. They are good friends of ours and really make exceptional wines.”

Gioquindo says she, her husband and Zimmerman are thrilled that many of their Stone Harbor fans have found their way to North Wildwood, and the trio is not done yet.

“Most of our customers from Stone Harbor have crossed that bridge to come dine with us here in North Wildwood,” she says. “And we are developing new customers. North Wildwood has been extremely warm and welcoming to us. For the future, we are hoping we can expand in the area and open another branch in another shore town and keep the name going with great quality food.”

And is Zimmerman on board?

“Absolutely!” he says with a laugh.

Between you and me: If you’re looking or a truly unique dining experience, make reservations for the chef’s table, a counter that connects to Chef Gus Zimmerman’s main kitchen where diners can get truly intimate with how Zimmerman runs Trio.

Generally, I like to limit the restaurants I visit for Shackin’ Up to strictly seafood shacks. But, over the last year or so, I kept hearing v…

Sweet confectionery at the boardwalks of the Jersey Shore

I’m not going to say that nobody eats fudge in the dead of winter, but the overwhelming presence of this sweet confectionery at the boardwalks…

Fried mortadella sliders, top, were a standout on Trio’s menu, and the scallop roll, below, is a playful twist on the more traditional lobster roll.