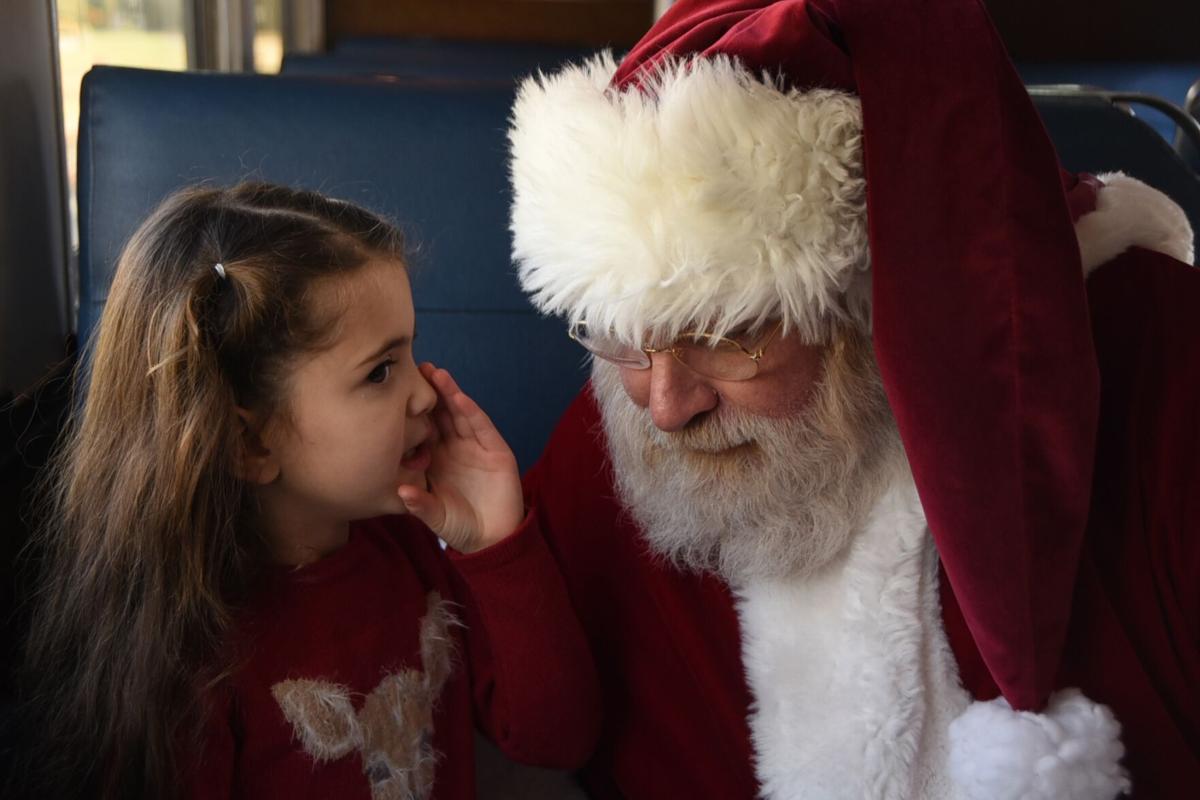 The Santa Express offers guests of all ages a chance to mingle with Kris Kringle while enjoying a magical holiday train ride. 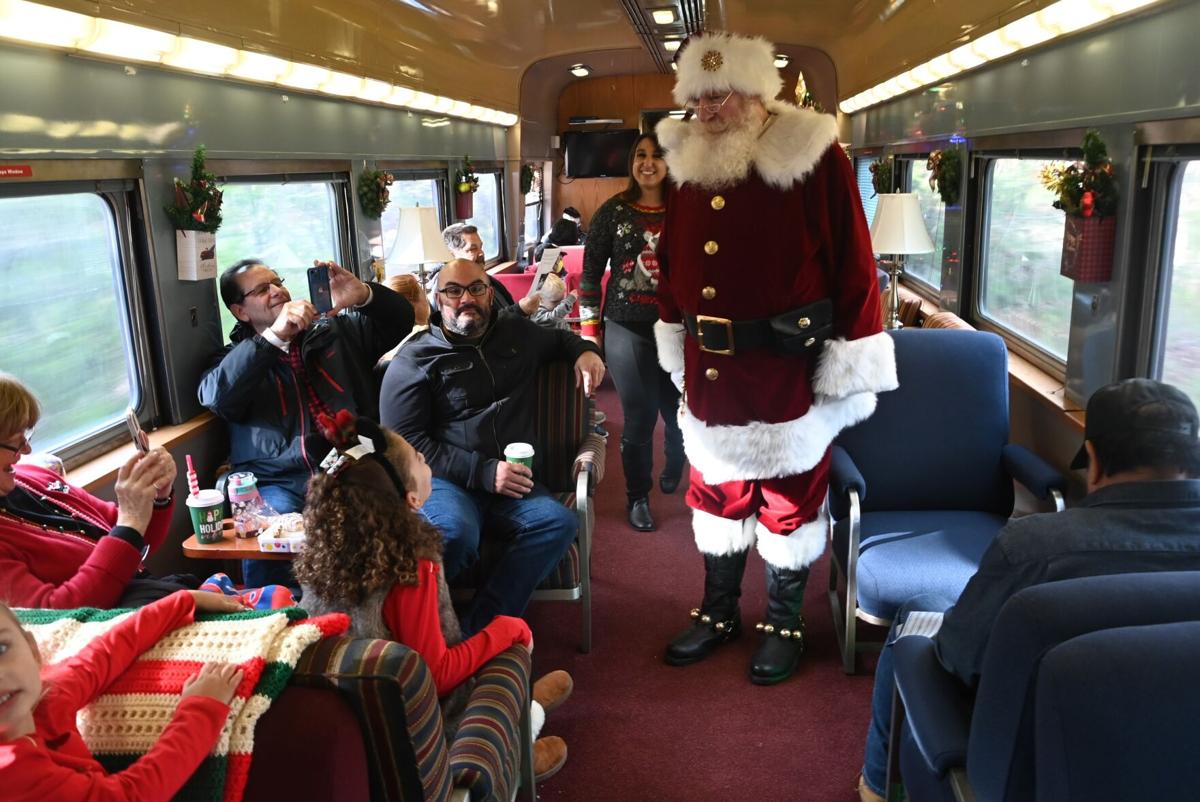 Does the following scene sound familiar?

You, with your family in tow, arrive at the mall on a Saturday in mid-December. The stores are packed, the items you wanted to buy for the people on your list are all back ordered, and that heavy winter jacket, which felt nice and snuggly outside in the frosty air, now feels like a personal torture chamber designed to boil you in the heat of your own sweat.

After a year’s absence, Wing Wars V brings the poultry party back to Golden Nugget

To make matters worse, your wife has decided it would be cute to have the kids take pictures with Santa for this year’s Christmas card, so you now find your entire family standing parka-to-parka with complete strangers in a long, snaking line overloaded with nervous, whimpering children cloaked in itchy wool pants and various versions of red or green plaid vests with matching bowties; and velvety Christmas dresses and uncomfortable shoes that they would never have picked out for themselves, all of them groaning their way forward with increasingly intense reluctance, until they ultimately arrive at the foot of Santa’s throne.

Each tot is then forcibly placed on Father Christmas’ lap by their own parental figure, who immediately steps away and yields all authority to an underpaid photographer in a freshly vomit-stained elf suit. What unfolds next is an incredibly anticlimactic and stunningly predictable situation that plays more like a scene from a particularly mean-spirited horror film than any type of pleasant holiday tradition, as the visibly terrified toddler is bribed with a candy cane and repeatedly instructed to smile, but instead wriggles to the floor, screeching and struggling through the yuletide trauma, face red and dripping with tears of terror as we all look on in pity for both the child and the man in the Santa Claus suit, whose job it is to crack a canned smile and pretend that this awful ritual is not in fact playing out for the 148th time today. And it’s only 11:15 a.m.

This is NOT how anyone of any age should have to meet Santa. But the good news is, there is a much more enjoyable option that the whole family will love: The Santa Express.

What is it?Now in its 26th year, The Santa Express is a holiday-themed train ride that takes folks on a 75-minute, round-trip journey on a real train from either the Tuckahoe Village or Richland Village railroad stations. Trains run on weekends and select weeknights through Dec. 22.

While aboard the train, passengers will be visited in person by Santa Claus from the comfort of their own seat, and in a unique and historical environment that you definitely won’t find at any shopping mall.

“Santa Claus is on board, and he visits everybody,” says Curt Hudson, who works as a crew member and occasional conductor for The Santa Express.

“He stops for pictures and talks to the children and adults in each car. And, of course, Santa has a helper, an elf. And she is a real character as well. She is really funny.”

The basic ticket gets you a seat in the coach section of the train, which has a traditional configuration of two-by-two seating with an aisle between the pairs of seats. First-class seats are available, as well, but more on that later.

All aboard!According to historians, the connection between trains and Christmas goes back more than 100 years, to the time period when the Lionel company first began releasing their model train sets, which became popular Christmas gifts for children. The sight of a toy train choo-chooing its way around the tree on Christmas morning has become an iconic bit of holiday imagery, so it’s only natural that a train-themed attraction would be a perfect fit for the season – especially one that uses the real thing.

And not just any old trains, either. Those featured in this holiday tradition have a bit of local nostalgia sprinkled on top.

“The historic cars used in The Santa Express include some of the old Pennsylvania-Reading Seashore Lines Budd cars that used to operate between Philly, Camden and the shore points, as well as some first-class cars which also have different histories to them. But even for people who aren’t train buffs, the Santa Express is fun because it takes place on board a train at Christmastime with Santa. And trains and Christmas have gone together for years,” he says.

The ExtrasOK, so it’s fairly obvious that one can expect to meet Santa Claus on The Santa Express, but there are a few other perks you might find on board – depending on what type of experience you purchase.

The Santa Express includes a variety of historic first-class cars with names like “Vista Valley” and “The Long Island Lounge Car.” A ride on these cars will cost you a little more, but they feature luxuries like swanky lounge chairs, sofas, table and tavern-style seating and other exclusive perks, such as hot chocolate and a cookie for each passenger. They can be reserved for larger parties or entire families.

“A lot of large families like to reserve those first-class cars,” Hudson notes. “We have one guy who does it every year – he gets 23 friends and family members, and they all have a holiday party on the train.”

And no matter what car you end up in, those on board can expect to see garlands and other holiday decorations throughout the train and to hear holiday music, both through the train’s sound system as well as from a live performer.

“We have a live musician on board – an accordionist who travels between the cars while the train is moving,” Hudson says.

A holiday traditionAfter more than a quarter century of the Santa Express running annually, there seems to be no signs of this train slowing down anytime soon. In fact, for many, it seems to be just another part of their celebration of the holiday.

“People come back because, to many of them, it’s a family tradition,” Hudson proclaims. “Parents bring their children, and grandparents bring their grandchildren year after year. It’s become part of people’s Christmas season.”

When: Various times and dates through Dec. 22

How much: Ticket prices range from $24.95 to $49.95 per person and can be purchased at The-Santa-Express.com

When you are living in the time of an active pandemic it’s easy to get nostalgic for the past. If only things could be like they used to be … …

Romanelli’s Garden Café in Galloway was always a great place to stop in for breakfast, lunch or brunch, as they have consistently served tasty…

Each year at the start of the holiday season, a myriad of local attractions suddenly spring to life like locusts emerging from their undergrou…

When the great COVID-19 lockdown slammed the brakes on the entire live music industry, the members of Chicago — like every other touring act —…

Looking for something to get you revved up this weekend? The Atlantic City International Motorcycle Show returns for three days of badass bike…

The Santa Express offers guests of all ages a chance to mingle with Kris Kringle while enjoying a magical holiday train ride.