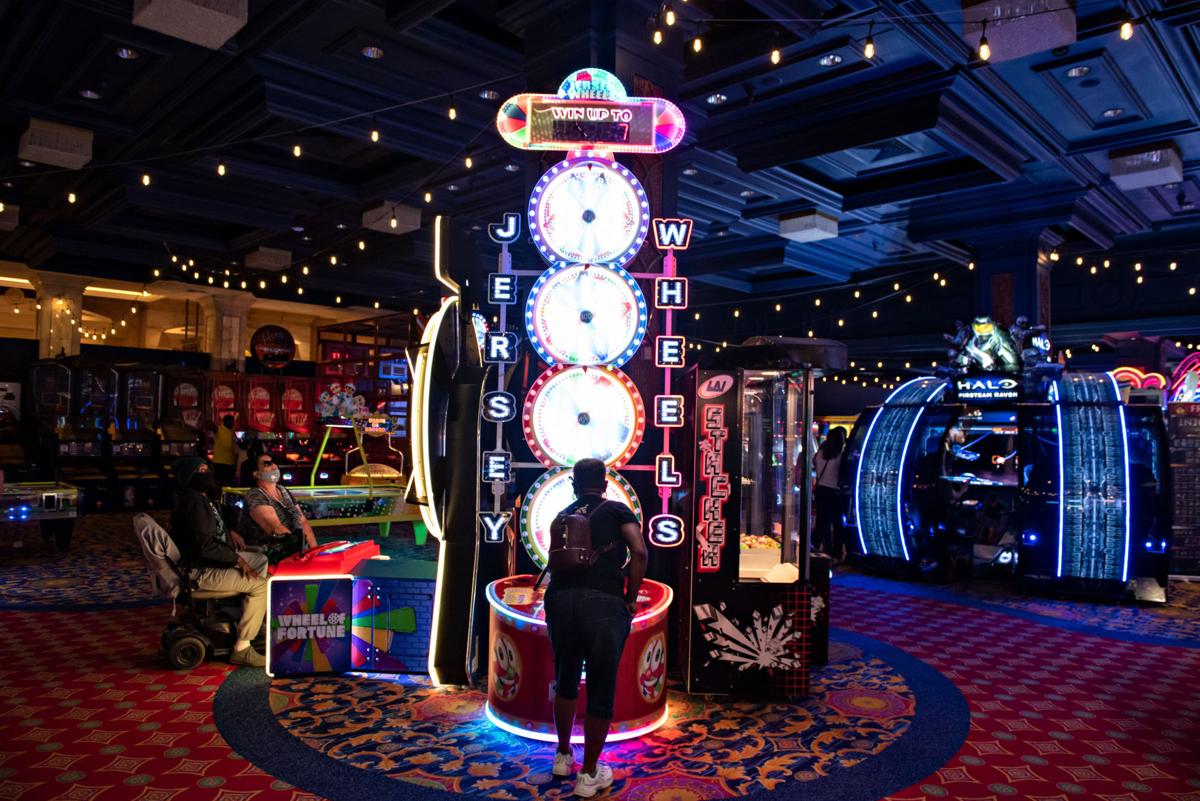 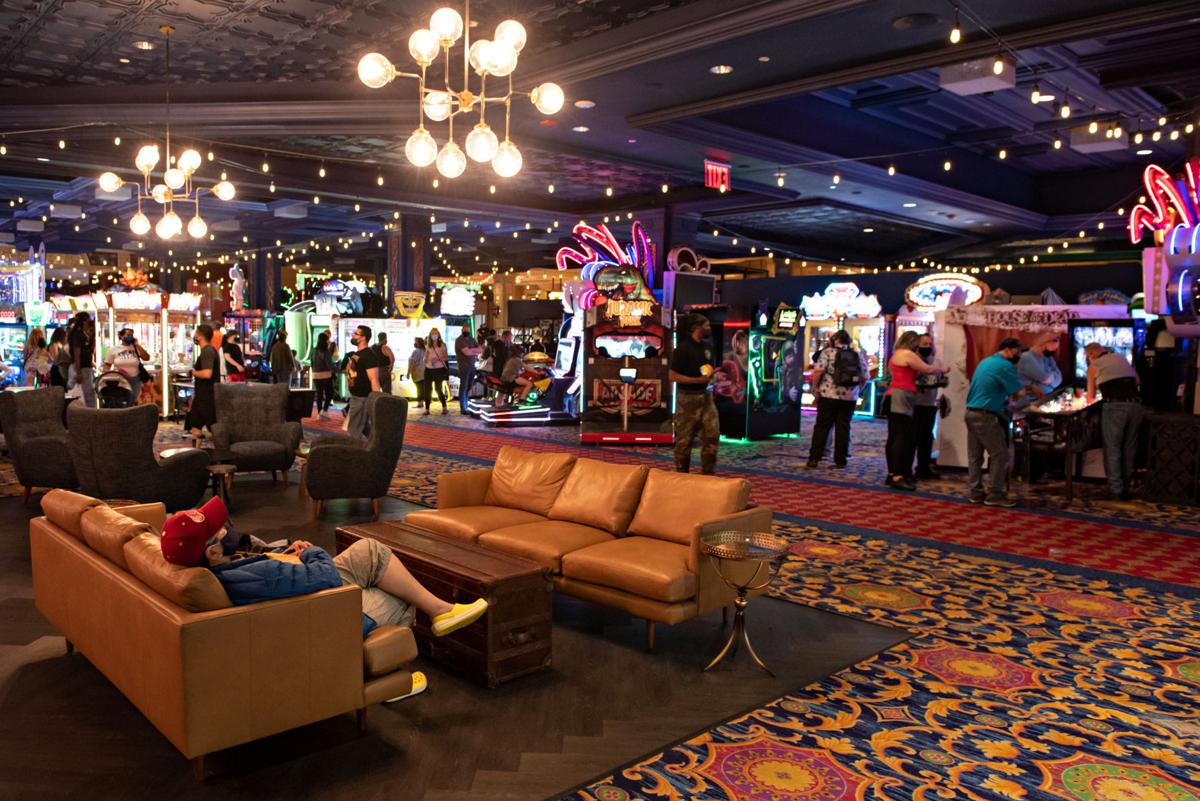 With many spots for lounging, taking a break at Lucky Snake is easy. 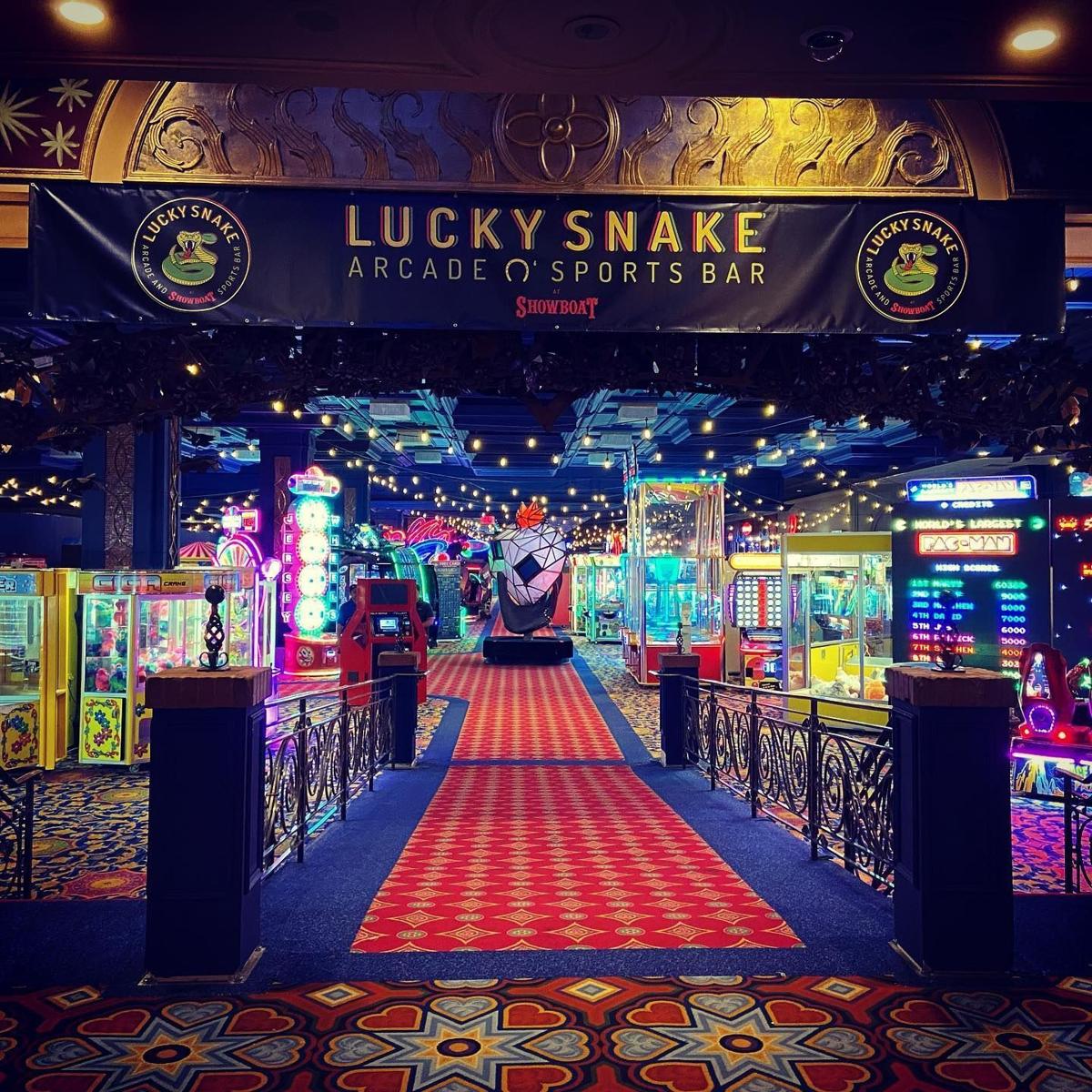 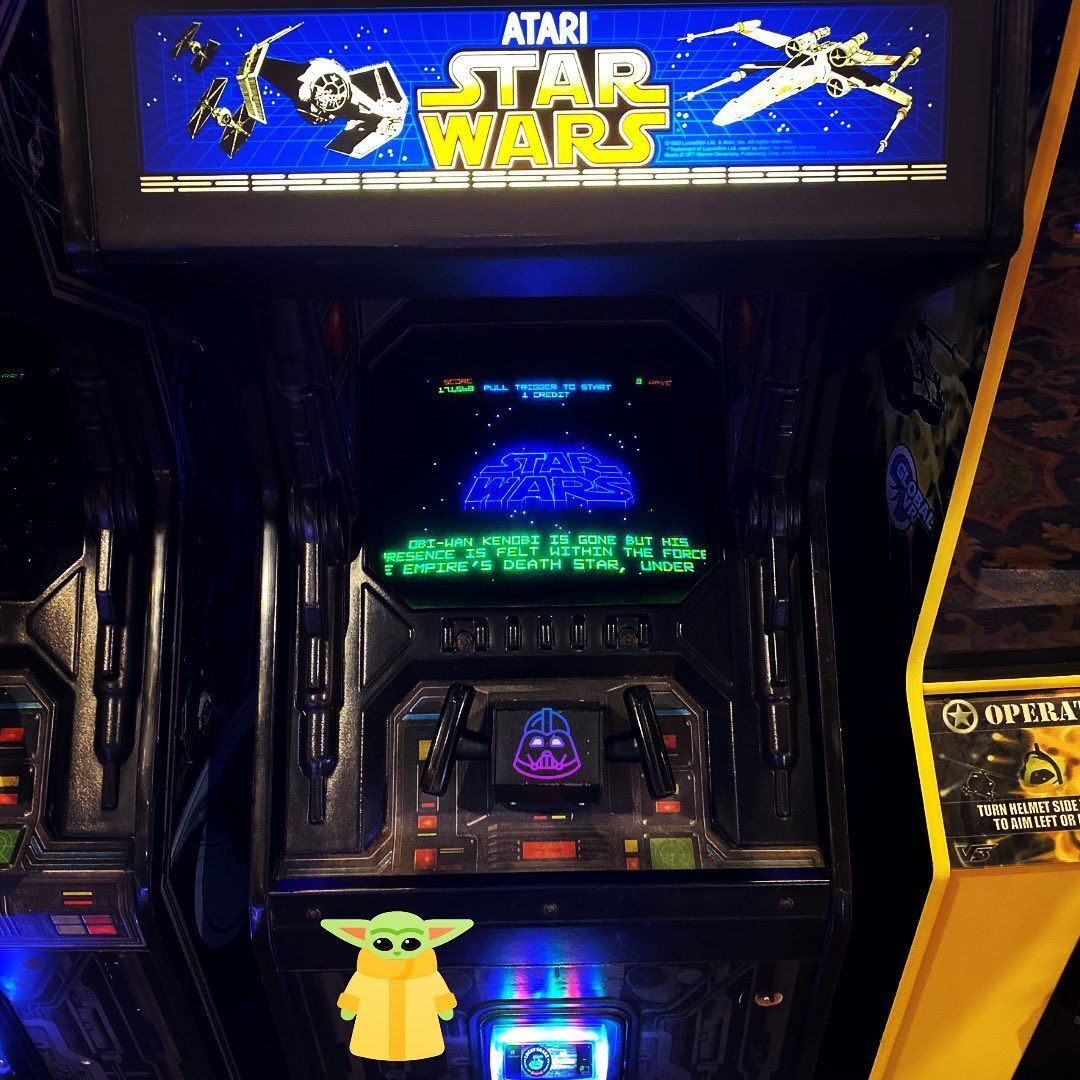 Old-school games like Star Wars are a nostalgic thrill for Gen Xers. 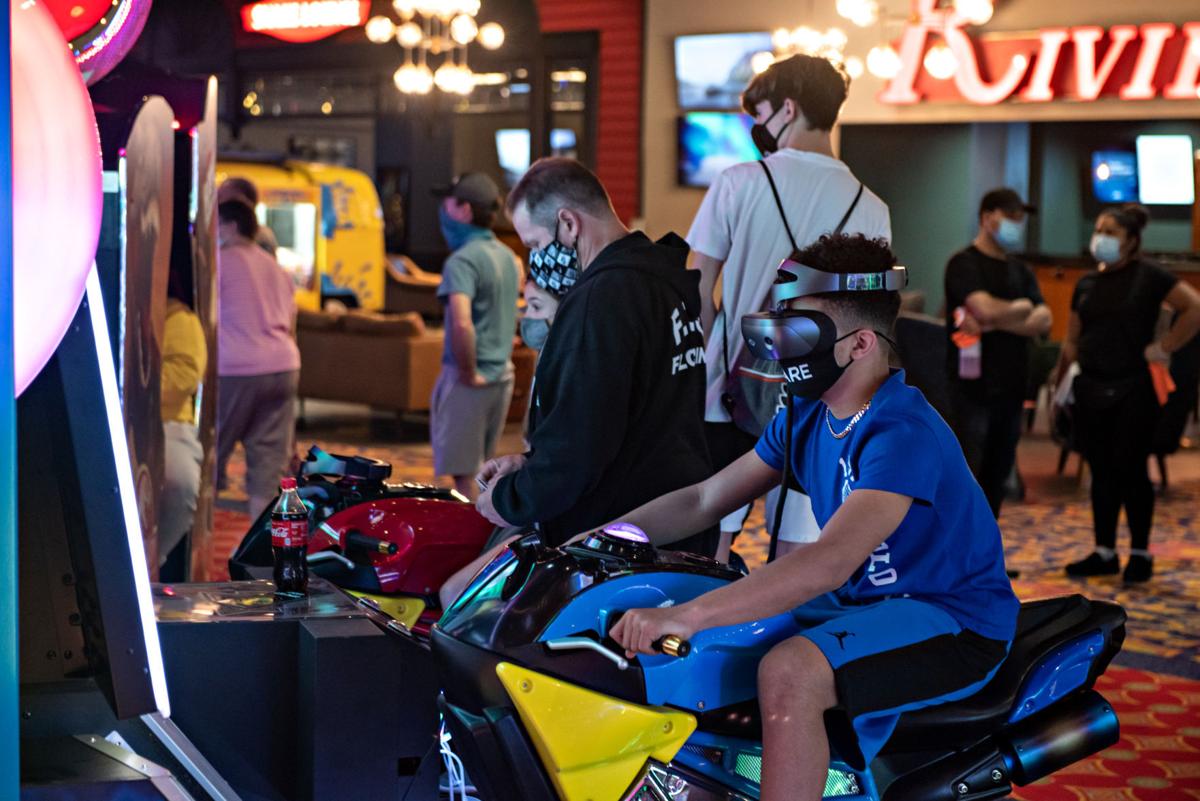 On May 15 2021, at Showboat in Atlantic City, the arcade Lucky Snake, situated on the former casino floor , had its grand opening. 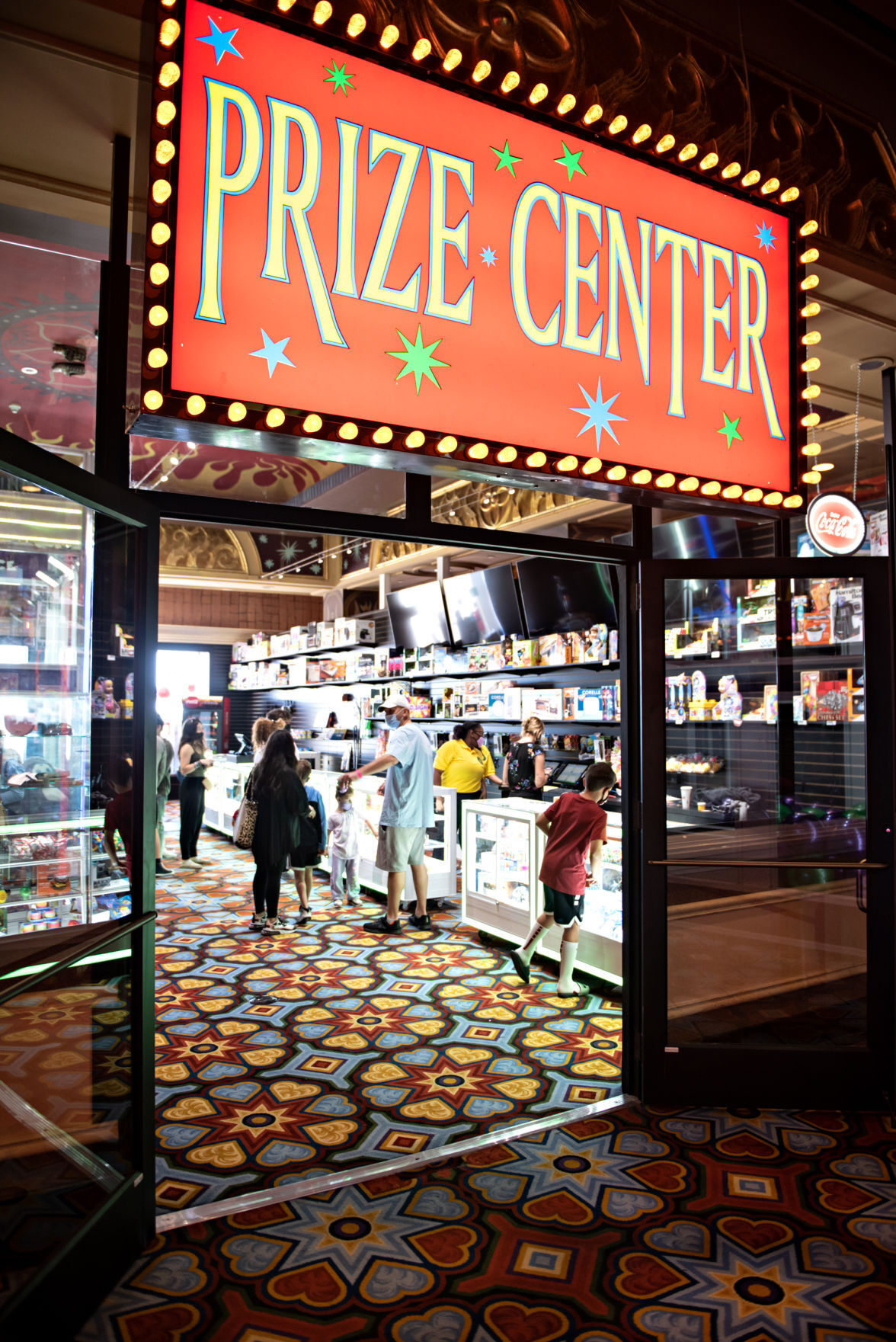 The Prize Center at Lucky Snake features many high value items not seen in your traditional arcades. 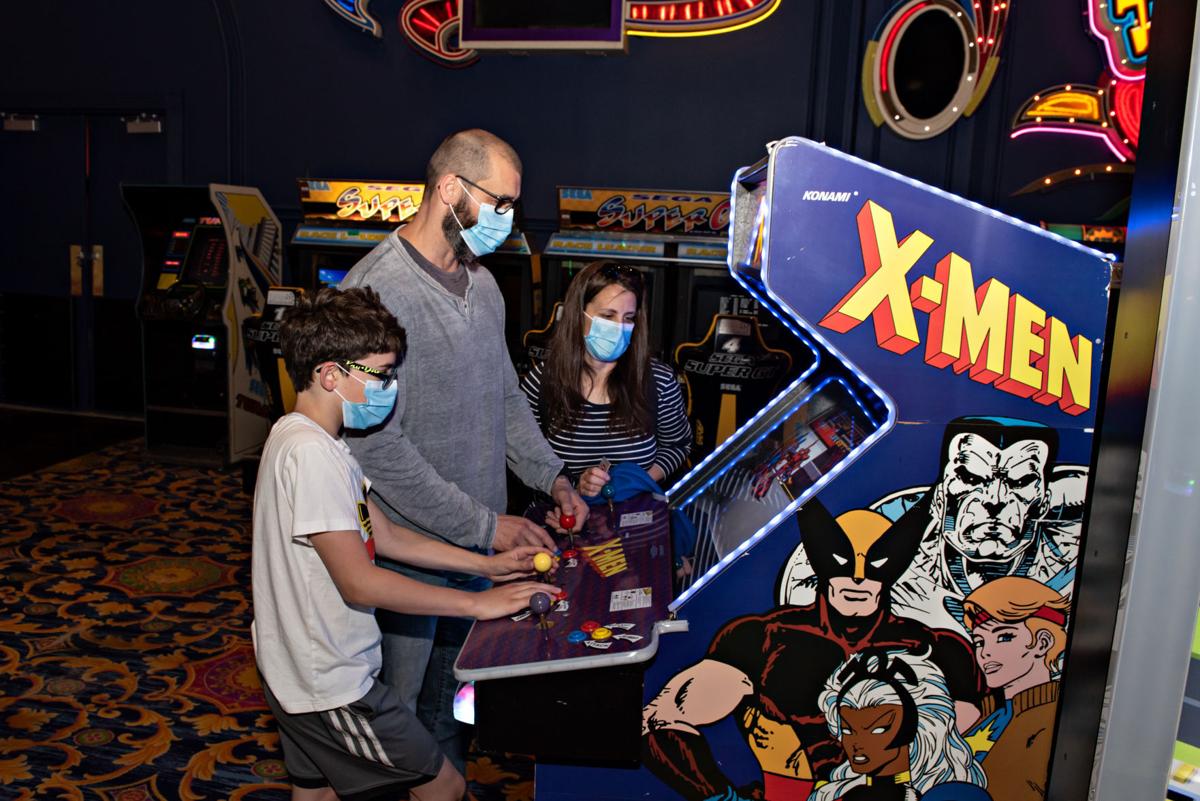 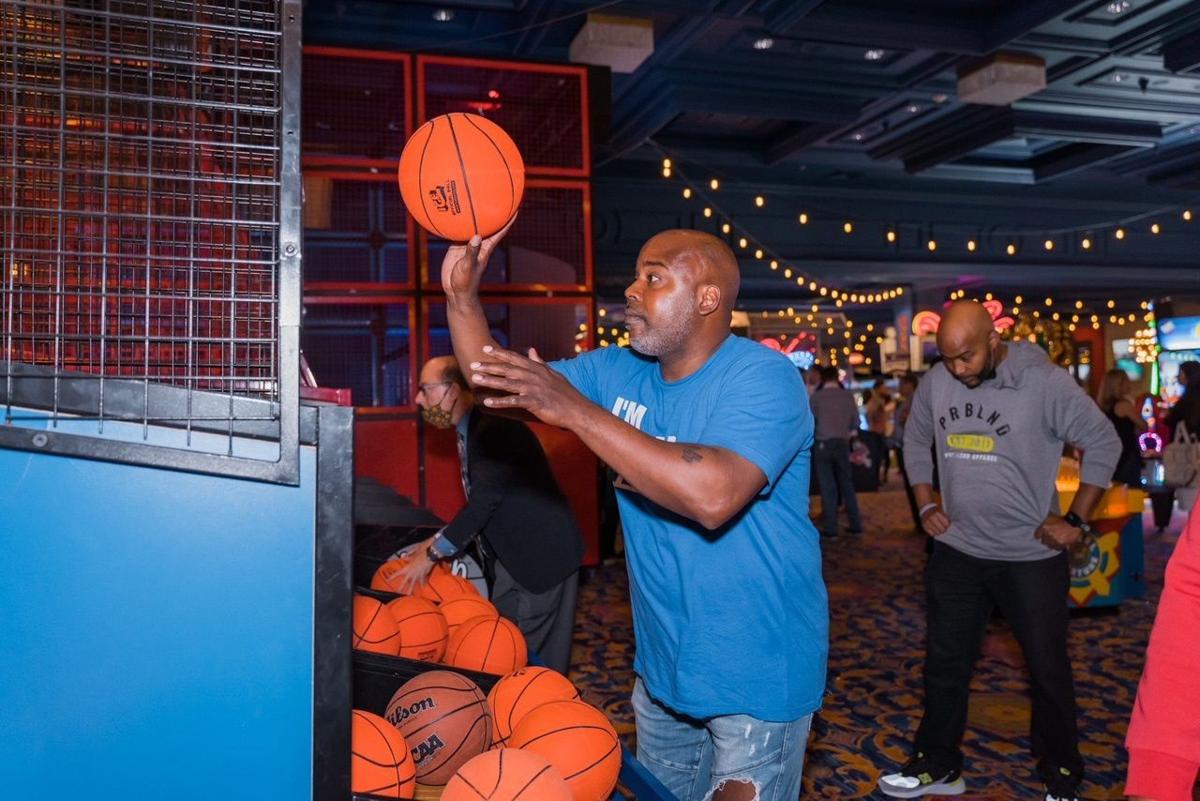 It ain’t all about video games — at Lucky Snake guests can test their skills at shooting baskets without having to go down to the local b-ball courts. 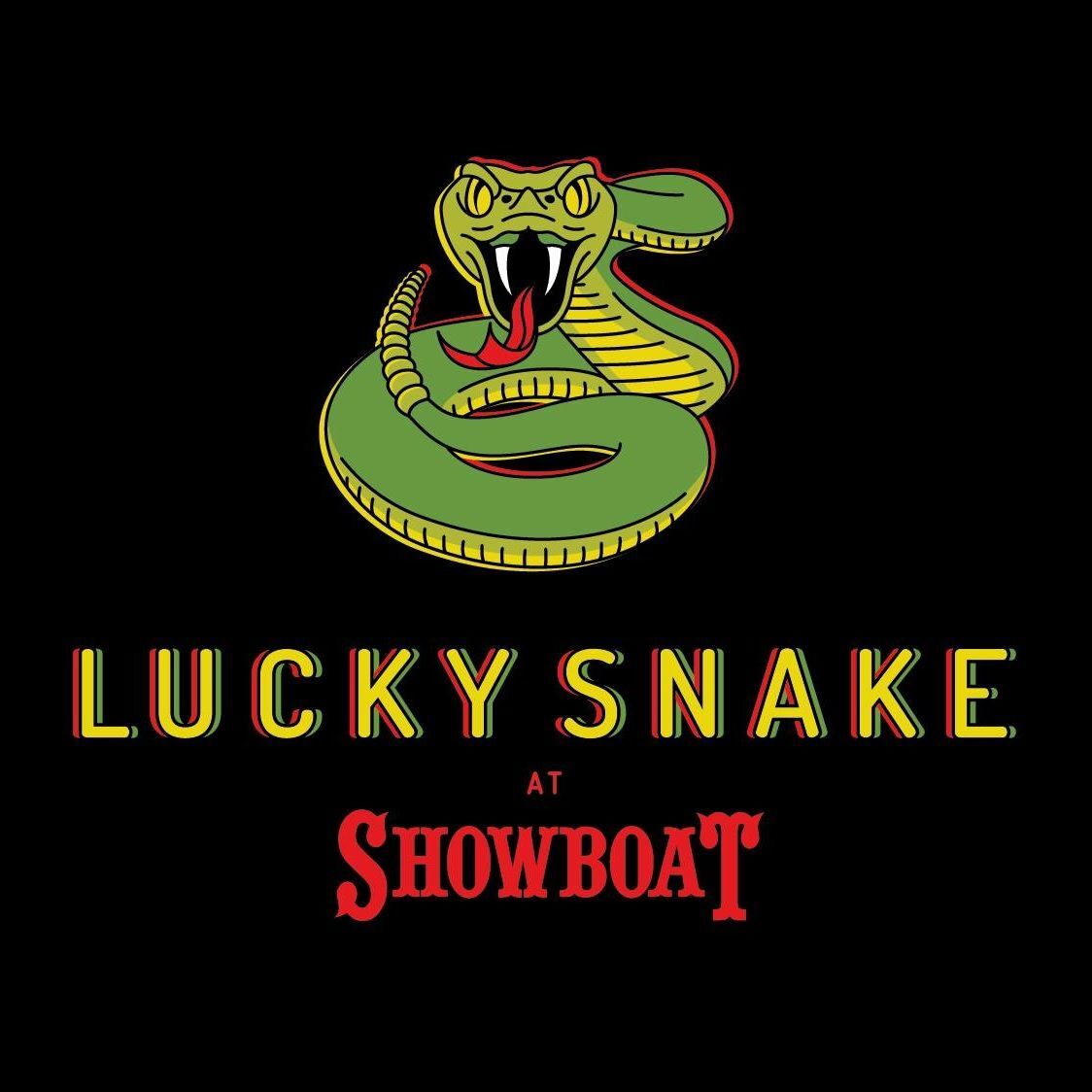 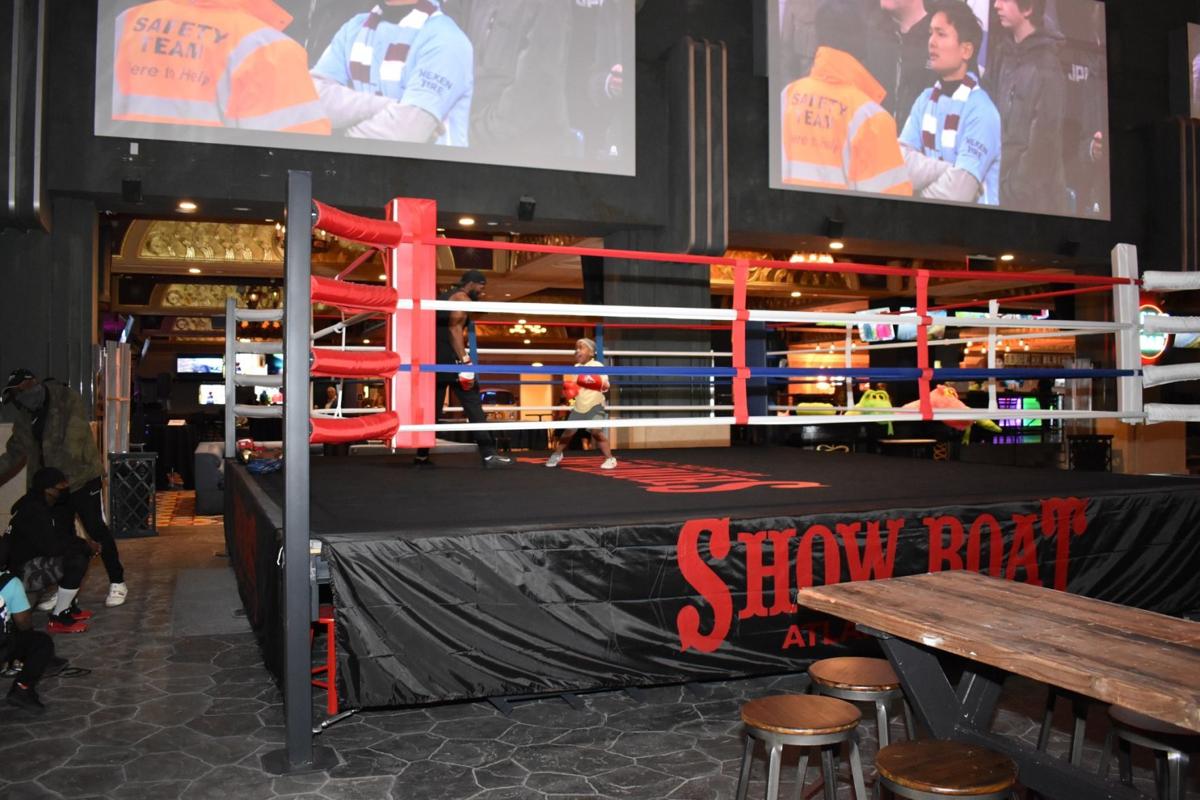 A giant boxing ring sits in the middle of the Spirit Bar at Lucky Snake. 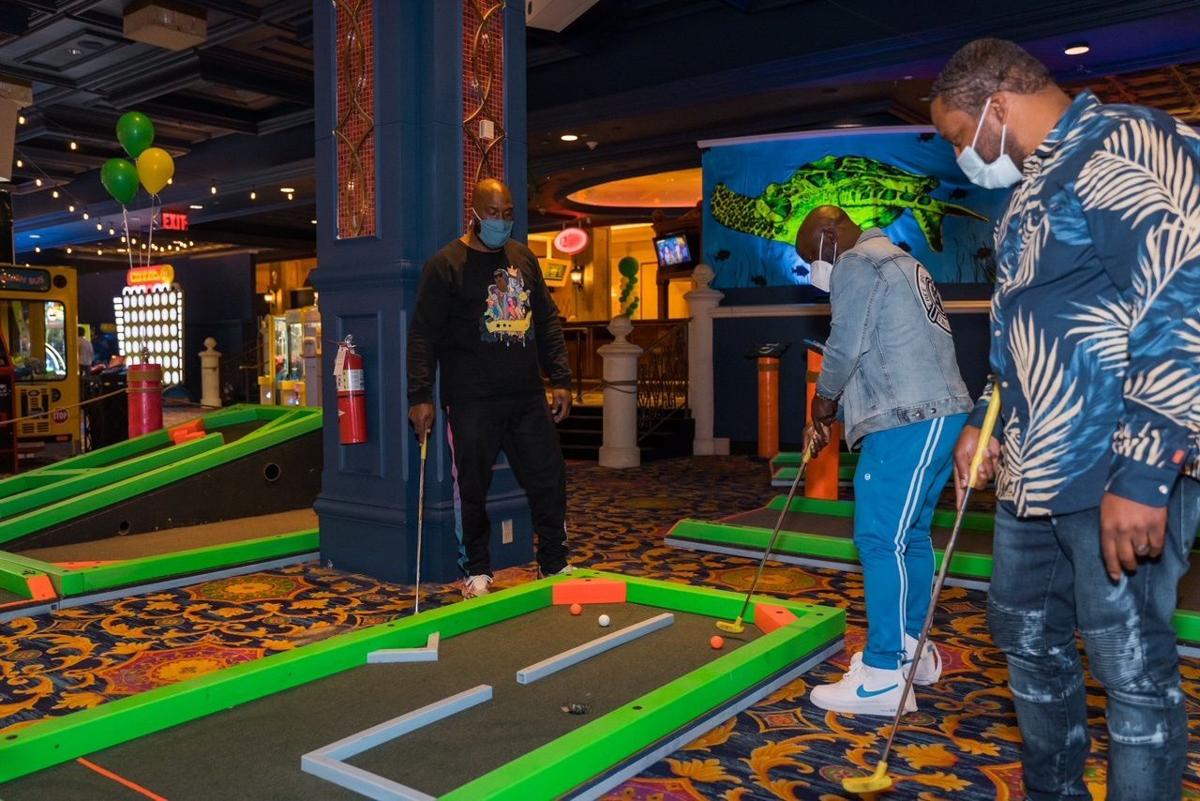 Back in the early ’80s, when video games like Donkey Kong, Frogger and Pac-Man were released, they launched what would become a nationwide obsession with arcade games. The elaborately decorated cabinets with their blinking lights, bleeping sounds and exciting gameplay made you feel like you had been transported to some futuristic world straight out of a “Star Wars” film.

But the spots where you could play these games were not found in Tattoine, they were found at your local arcade — a thrilling, dimly lit space packed with pinball machines and rebellious teens and offering just enough of the sketchy vibe to keep things exciting. Your mom probably didn’t want you to hang out there — and that was half the fun of going.

But in the years that followed, arcades began to lose their luster as the advancement of home game systems made them seem obsolete. But as they have become more of a rarity, the nostalgic appeal of an old-school arcade has only increased. And just in time for summer, Tower Investments CEO Bart Blatstein and his team at Showboat Hotel in Atlantic City have just opened up the largest one you are likely to see in your lifetime.

It’s called Lucky Snake, and it sits right where Showboat’s casino floor once stood. Gone are the slot machines and table games, yet somehow the same sense of excitement remains, but with a much more family-friendly vibe than what can be produced by any gambling hall. Blatstein had the goal of bringing family entertainment to Atlantic City, and Lucky Snake nails that concept from top to bottom. Flanked by an incredible sports bar and various lounges, this new entertainment space takes the old-school arcade concept and runs with it.

So, what sets it apart from your average boardwalk arcade?

“Lucky Snake will be the largest arcade on the East Coast — almost double the size of your average Dave & Buster’s,” says Brandon Dixon, president of Tower Investments. “We have games from the ’80s right up to the most current stuff. And we will have some incredible prizes. You can win up to $10,000. We will be giving away a motorcycle. You can win a Gucci handbag or even a cruise. So there is a huge difference in what we offer.”

As you come into Showboat from the Boardwalk, the entrance to Lucky Snake is dead ahead. To get to it, it’s a quick stroll through a pathway flanked by bars. On the left is Spirit Bar, a truly impressive 25,000-square-foot sports bar complete with a myriad of TVs and a full size boxing ring. On the right, a lounge area with comfy couches faces a stage where bands perform regularly with a roomy dance floor below. Between the two is the entrance to the arcade itself.

“We have a very large sports bar. It seats up to 600 people, and there will be live entertainment both in the bars and in the arcade itself. We will have celebrity appearances from reality stars and others that we have already booked,” Dixon says.

Inside it’s a long football field-shaped arcade space with every form of game imaginable from front to back, with a few additional lounges including Riviera Bar and The 12 Bar, each of which provide comfortable space to relax with a few cocktails between rounds of Space Invaders.

Lucky Snake doesn’t merely tip its cap to the old-school gaming experience with a handful of relic machines, it absolutely dives in head first. Just about every classic video game that you played in your youth – or were too young to experience – is here. Want to smash your fist through tall buildings as one of the monsters in Rampage? You can. Got an itch to team up with three of your buddies and battle your way through the city as Teenage Mutant Ninja Turtles? You can. Haven’t played that first Star Wars game since you were 7 years old? Well, it’s right over there. If you are nostalgic for those classic golden age arcade games, you won’t find a better selection of them than what is offered at Lucky Snake.

“I personally love the old-school games and pinball machines … the type of stuff that you just can’t find at most arcades today because they only focus on what is new,” Dixon says.

While the Gen-X crowd may be loving every minute of the ’80s and ’90s arcade relics, young gamers will have plenty to keep them busy as well with some incredible new machines such as the 4k shooter version of Halo: Fireteam Raven, plus the always-popular House of the Dead and endless others. On top of that, there are multiple virtual reality-based games such as Ultra Moto, which is played while seated on a motorcycle, as well as an entire area devoted to e-sports gaming. Old and new come together, too, as many giant size versions of classic games such as Connect Four and Pac-Man dot the arcade floor.

“We bring the retro games as well as the new.” Dixon promises.

Lucky Snake also offers some great traditional boardwalk favorites such as skee-ball, crane games and a full blacklight-lit mini golf course. Sports fans will enjoy shooting around on one of the many basketball games or perhaps taking on a date in a spirited round of air hockey. And what would any arcade be without a great lineup of pinball machines? They got ‘em here, with plenty of fun themes like Lord of the Rings and Star Wars.

What’s going to make this all work?

While the opening of Lucky Snake is exciting, the question remains: Does an old-school concept like a video arcade still hold the power to attract people from all over? According to Dixon, it doesn’t have to, as the plans for Showboat go far beyond Lucky Snake.

“We see the arcade that we are doing as a benchmark for what is to come in the future with things such as our waterpark concept. This arcade ties into a much greater purpose as opposed to a standalone concept,” Dixon notes.

In addition to the water park, plans are in the works to build an outdoor concert venue called The Dome next to the hotel, as well as a beer garden and sun deck, all of which Blatstein hopes to have open by summer 2022.

“We studied the things that happened in Las Vegas. Las Vegas really made the transition from gambling to entertainment, which made their numbers pick up. So that’s our focus right now. We really want to help start the transition in Atlantic City to be not just about gambling and instead focus on entertainment,” Dixon promises.

With many spots for lounging, taking a break at Lucky Snake is easy.

Old-school games like Star Wars are a nostalgic thrill for Gen Xers.

On May 15 2021, at Showboat in Atlantic City, the arcade Lucky Snake, situated on the former casino floor , had its grand opening.

The Prize Center at Lucky Snake features many high value items not seen in your traditional arcades.

It ain’t all about video games — at Lucky Snake guests can test their skills at shooting baskets without having to go down to the local b-ball courts.

A giant boxing ring sits in the middle of the Spirit Bar at Lucky Snake.