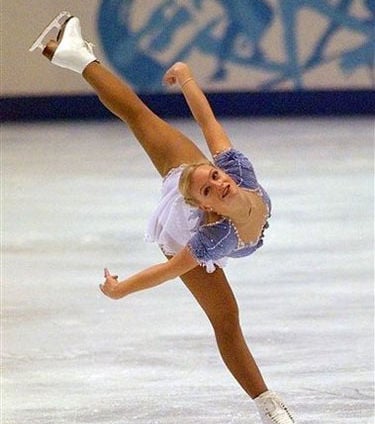 In the mid-90s, perhaps the most watched U.S. skater after Nancy Kerrigan and Kristi Yamaguchi was the then teen-sensation Nicole Bobek. She was known for an exuberant style, a sexy flair to her routines (and costumes) and for a rousing high leg spiral that would soon be copied by just about every other skater.

In 1995 she won the U.S. skating championship, the pinnacle of her career.

But Bobek wasn’t able to stay on top. Problems began to mount for her. She changed coaches numerous times and injuries slowed her. She did not medal at the 1998 Olympics and started to fade from sight.

In 2009, however, she reemerged in the spotlight in a new and disturbing way. Bobek was implicated in a methamphetamine distribution ring, plead guilty and was sentenced to five years probation and 250 hours of community service.

It seemed impossible that her dark-haired mug shout could be the same person as the lovely blonde teen that had excited skating fans years earlier.

But Bobek faced the press head on, admitted her drug use on national TV and began a long climb back into the world of skating.

Saturday, Dec. 3, at the Caesars Tribute II: A Salute to the Ladies of the Ice, (7:30pm, Boardwalk Hall) marks one of Bobek’s first performances on the ice in nearly eight years (she made an appearance at a charity show in April).

“I’m so excited I can’t even explain,” Bobek tells Atlantic City Weekly in a recent phone interview. “People are asking me if I’m nervous and I say, ‘I’m not nervous. I’m excited.’ It’s really a great feeling. The response I’ve had from family and friends is wonderful, they are so excited. It’s a huge, huge step, so I’m very proud.

“I’m blessed that I’ve been given a second chance in life,” she says. “Life is so much better now. I think I was in a dark place and now I believe that I have God on my side. I’m very positive about things and very focused. I truly believe that I’ve bloomed into a different kind of person.”

Of course, eight years is a long time away from skating.

“Honestly, it’s taken a really long time to get back into form,” she says. “People say, ‘Oh, it’s like riding a bike.’ Well, not really. It took me a good three months before I could even start jumping.”

Bobek calls it an honor to be among the star studded line-up for the show which includes Tara Lapiniski, Sasha Cohen, Nancy Kerrigan, Sarah Hughes and current would champion Mike Ando, to name just a few skaters. The event also includes a tribute to Peggy Fleming, though she won't be skating.

“Not only is it an honor, I think the whole concept of the show is just a fabulous idea," Bobek says. "Between Peggy Fleming being there and Nancy [Kerrigan] skating and Sarah Hughes I don’t think you can get any better than that.”

And for those who recall Bobek’s trademark spiral, that will be there as well.

“One thing skaters always hold onto, and I think what the audience loves to see us do, is our trademark things,” she says. “We say we’re doing our tricks out there and doing the tricks the best we can. The joy of where I am at now is that it’s not about the demands of competition that you have to do five triples in the program, or 20,000 spins. I skate now because I love to and for the audience. It’s a totally free, different kind of skating. I’m out there enjoying the music and feeling the crowd. I’ve never been more excited.”