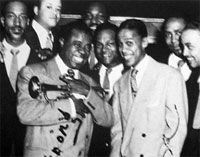 THE ADDRESS WAS 32 North Kentucky Avenue, and it was a place where the music -- and the night -- never died. If the entire block, including the likes of Grace's Little Belmont and the Wonder Garden bar, was a jazz mecca, Club Harlem was the primary shrine.

Shifting silhouettes painted on wall mirrors mimicked flesh-and-blood dancers onstage, as musicians roared through their sets at all hours. Sunday mornings brought 5am "breakfast" shows, with breakfast consisting of pretzels and a chaser. The top black entertainers in the country took the stage at Club Harlem and performed for an audience that was mostly white. Soulful Billie Holiday sang here, flamboyant bandleader Cab Calloway conducted, and Sammy Davis Jr. danced up a storm. The Sepia Revue and Beige Beauts dazzled with their costumes and movement, Chris Columbo beat the drums, "Hot Lips" Paige blew his trumpet. "Moms" Mabley, George Kirby, and other comics -- including one of the rare white performers booked here, Lenny Bruce -- grabbed laughs, but Club Harlem was known for its music. Headliners appearing elsewhere in town often showed up after finishing their acts to take in the wee small hours.

Club founder Leroy "Pop" Williams said that he chose the name Harlem because "a lot of black people live there." But on Kentucky Avenue, excitement was color-blind. At Club Harlem, the streetfront exterior only hinted at the magic within. Columbo, who piloted the house band for 34 straight seasons, often warmed up with guitarist "Wonderful" Floyd Smith and jazz organist "Wild Bill" Davis in one of two lounges before the main show. Crowds jamming the big room were known to exceed the capacity of 900. Of Davis, Columbo said, "He brought the Hammond organ from the funeral homes and gave it to jazz."

Click here for 2010 video on the Club Harlem exhibit in Atlantic City and interviews with kin of original owner Leroy Williams.

Williams had converted the dance hall Fitzgerald's Auditorium into Club Harlem in 1935, and in the early days, the new venue offered more than just music. By day, it took bets on the ponies, and funneled gamblers into the backroom of an adjacent building for a go at blackjack and craps.

In 1951, Williams and his brother, Clifton, recruited additional partners, and the marquee eventually bore the name "Clifton's" in large electric lettering, topped by a note-shaped electrified sign that said "Club Harlem." One of the new business partners was Ben Alten, who had left the Paradise Club on Illinois Avenue. Years later, Alten was quoted in the Atlantic City Press as saying," Pop [Williams] wanted a white man as a partner because he wanted to expand the place, and in those days, the banks weren't lending money to black men."

Pop and Clifton got their green, and turned the walls to red-and-gold velvet. Debonair promoter Larry Steele packaged his annual Smart Affairs tour for Miami Beach and Las Vegas as well as Club Harlem. The dancers stayed sleek, the singers dusky, the comics razor-sharp. Then the inevitable decline.

In the early morning of Easter Monday, 1972, a shootout inside Club Harlem triggered a melee and resulted in five deaths. Philadelphia gangs battling over drugs were fingered as the culprits. In truth, this musical mother lode was already on the skids. Soon, the arrival of casino hotels on the Boardwalk sealed the demise of the streetfront clubs.

Club Harlem switched off its red-hot marquee in 1986. Six years later, a December nor'easter shook the structure and crumpled the famous sign. Two weeks after that, bulldozers leveled the storied building.

A few loyalists rescued some of Club Harlem's inimitable texture: chairs, booths, padded interior doors, onstage props, vintage photographs. These appointments were sequestered in storage rooms, awaiting the call back to center stage, perhaps in a new or existing museum.

Meanwhile, the old voices and images hover in the air, unwilling to relinquish that special space on Kentucky. The dancing dynamo whirling about the stage-in-the-sky is Peg Leg Bates. And those one-liners are being slung by comedian Slappy White. The beautiful songstresses with their sultry voices are Nancy Wilson and Damita Jo, and vocal stylists Billy Daniels, Joe Williams and Brook Benton weave their spell as well. Dinah Washington and her musical heir, Aretha Franklin, are belting to the heavens.

They all played Club Harlem, as did many more. Where the bricks and mortar came alive, and the adrenaline never quit.

Rock music has always been a little threatening. When it first came out in the 1950s, even something as mild as Elvis’ shaking hips were famou…

If you spent the last few days mourning the end of summer, it’s time to dry your eyes, because there is much fun to be had throughout the mont…

Damn, the Hard Rock Hotel & Casino Atlantic City is not only living up to its name, but it’s completely dominating the Atlantic City enter…

In 2019, the Atlantic City Jazz Fest made its debut in America’s Playground, and after going dark for a year due to the pandemic, it plans to …

Toby Keith is a complex character.

In 1967, Danny Hutton had already achieved moderate success as a singer-songwriter for Hanna-Barbera Records. A few years earlier, Hutton’s “R…

Add another bright-colored feather to the cap of Ocean Casino Resort. They have just announced the addition of an all-new nightlife experience…

As KISS delves further into a farewell tour that was interrupted by the pandemic, lead singer and guitarist Paul Stanley knows what he’ll miss…