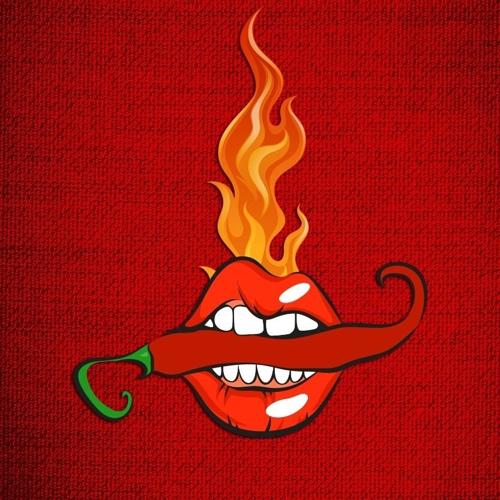 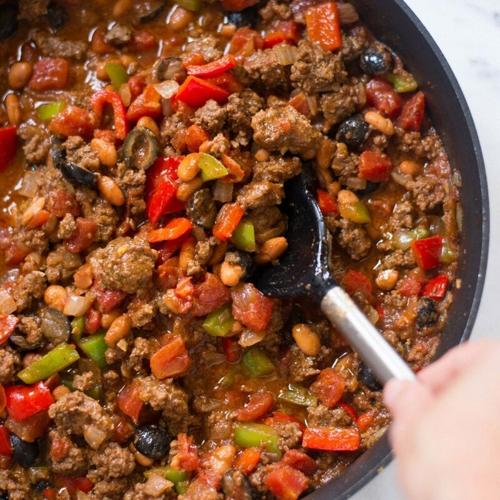 Multiple varieties of chili will be on hand to compete at the Chili Knockout & Spicy Food Fest, and you can be their to judge. 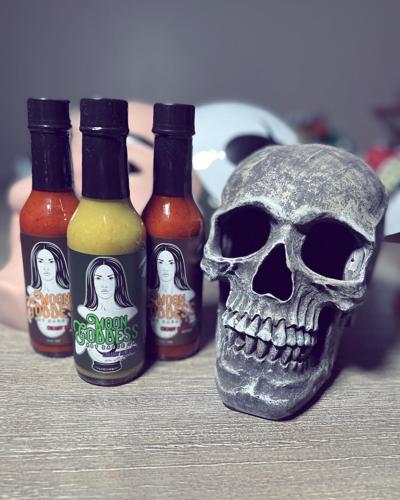 A variety of locally-produced hot sauces will be on hand at the Fest, including several from Moon Goddess. 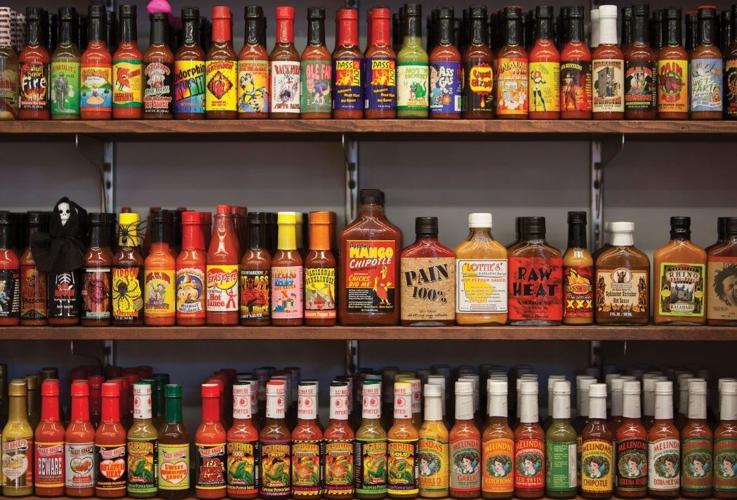 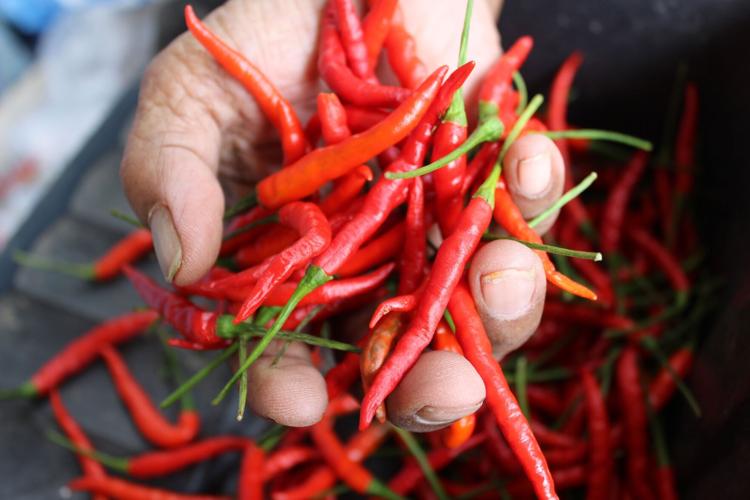 A hot pepper eating contest will take place at the Chili Knockout & Spicy Food Fest. Can you take the heat?

When you are served a plate of food, do you find yourself constantly reaching for a bottle of Tabasco? Are you visibly upset when the group you’re with requests the “mild” wings? Do you scoff at those who reach for a glass of milk after a bowl of five-alarm chili?

If so, you would be wise to get yourself down to The Orange Loop Arena at Bourre between 11 a.m. and 6 p.m. Saturday, May 21, for the Chili Knockout & Spicy Food Fest, a celebration of culinary heat unlike any other.

The festival is the latest creation from the demented minds of Jon Henderson and his team at Good Time Tricycle Productions, the folks behind such fun events as The Atlantic City Beer & Music Fest, Witch-Craft and Knee-High Knuckle Buster Micro Wrestling, among others.

Kicking things upAmerica’s love affair with spicy food is a relatively new concept. For years we were known for shying away from anything deemed “exotic” and often sticking to a basic “meat and potatoes” approach to cuisine, but in the last several decades, spicy food has permeated almost every angle of American dining, from habanero-infused cocktails to Nashville hot chicken and beyond.

“The interjection of Latin influence and the influence of other food cultures in America really caused everyone to step up their spice game. Once other cultures introduced us to spicy grub, it was only natural for Americans to begin to glom on, because in this day and age a lot of people like a little boost in their flavors,” Henderson says.

As for the Chili Knockout & Spicy Food Fest, Henderson sees it as an incredible opportunity for foodies too.

“When you talk about people who have a passion for food, it’s all about flavor discovery. And at an event such as this, there’s a huge opportunity for flavor discovery. Sometimes that little bit of burn makes the discovery that much better.”

Though the Spicy Food Fest will make its debut this year, according to Henderson, it was a long time in the making.

“This isn’t something we came up with spontaneously; this idea has been sitting on my shelf since 2018,” he says. “We were going to produce this event in 2020, but then 2020 happened and 2021 was more about getting back on our feet, so finally this year we decided to do it, and it’s going to be a lot of fun.”

The foodBasic admission to the Chili Knockout & Spicy Food Festival will earn you entry to the event and the opportunity to purchase a variety of fiery items from a long list of local restaurants, but, for 10 bucks more, you can also be an official chili judge. That means you’ll receive a tasting pass that will allow you a 2-ounce tasting of chili from each of the 20 restaurants in attendance. You’ll receive three voting tickets, which will enable you to cast your vote for your favorite chilis of the day. The votes will be tallied at the end of the event, and a $5,000 grand prize will be awarded to the winning chef, with $2,500 of it going to the charity of their choice.

Though chili is a big part of the event, the restaurants will get to spread their spices a bit further and really get creative, bringing the heat to everything from cheesesteaks to wings to spicy noodles – and beyond.

“Chili is awesome, but not everybody likes chili, so we decided to add the spicy food component to have the restaurants feature a broader variety of dishes that have a spicy kick,” Henderson says.

The drinksWith this much spicy food around, you’ll likely be reaching for a cool drink to take the edge off, but be careful what you order, as even some of the cocktails at the Chili Knockout will pack a peppery punch.

Spirit purveyors like Alibi Gin and Little Water Distillery will offer their own signature spicy cocktails as well as some tamer ones, and beers and will be available from Dogfish Head Brewery along with hard seltzers from High Noon and more.

The funAs with every Good Time Tricycle event, there will be shenanigans going on throughout the day to keep you entertained between bites of flaming hot food.

Several competitions will take place, including a pepper eating contest in which seven contestants will take the stage and attempt to chomp their way through some of the hottest peppers around, and a second contest called “So, You Think You Know Hot Sauce?” where eight contestants will be tasked with tasting and identifying specific ingredients within each hot sauce and ultimately will have to guess the identity of sauce they are consuming.

“Hot sauces are complex, so we want the contestants to actually try these hot sauces and be able to say say, ‘OK, here are the ingredients.’ It’s really about how sophisticated your palate is,” Henderson says.

The winners of each contest get $100 and bragging rights, while the losers just get a mouth full of fire.

In addition to contests, there will be live music from party band The Fight Back Home as well as Conjunto Imagen, who will bring their arsenal of spicy Latin tunes to the mix.

The saucesMuch of the spicy food craze in America was built around the popularity of hot sauces, and at the Chili Knockout & Spicy Food Fest, folks will have the chance to purchase handcrafted sauces from many Jersey-based companies, including Jersey Girl Hot Sauce Co., Whitehouse Station Sauce Company, Hank Sauce, Hot Graham Sauce Company and many more. The sauces run the gamut from sweet and flavorful to hellishly hot — and all points between.

“We’ve got more than 20 hot sauce companies coming, and we know how people like to stock their cabinets with unique hot sauces. You’ll be able to choose from some really great flavors from around the state and beyond,” Henderson promises.

welcome, tooEven though the majority of the eats at the festival will have some element of heat to them, don’t worry: Your wimpy friend who can’t take the pain will still enjoy the day, too, as there will be non-spicy options. Roughly 80 percent of the dishes will be spicy to some degree, with the rest falling on the tame side.

“I like food that is hot, but still edible, but I’ve got friends who like to burn their faces off. So everybody’s palate is significantly different, and that’s what makes this fun. Ultimately the entire thing is a food celebration,” Henderson says.

How much: Tickets, priced at $15 for general admission and $25 for admission as a chili judge, can be purchased at the door or at ChiliKnockout.com

Are you a country music fan but couldn’t make it down to the big Barefoot Country Music Fest in Wildwood a few weeks ago? We have good news: R…

It’s fun to be amazed. Watching something that defies logic or the laws of physics is an incredible experience and this is the core of why the…

5 Questions with Stephen Pearcy: The Voice of Ratt

If there was a Mount Rushmore of ’80s metal singers, Stephen Pearcy of Ratt would likely be on it.

Multiple varieties of chili will be on hand to compete at the Chili Knockout & Spicy Food Fest, and you can be their to judge.

A variety of locally-produced hot sauces will be on hand at the Fest, including several from Moon Goddess.

A hot pepper eating contest will take place at the Chili Knockout & Spicy Food Fest. Can you take the heat?