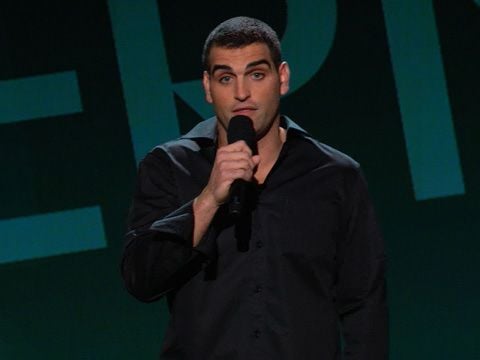 Much of Ernst’s act is done off the cuff in a free flowing, storyteller style. ‘For me a lot of it is about instinct. I write a lot on stage,’ he says.

Louie LaRusso Jr. finds himself in all kinds of trouble in ‘Cobra Kai,’ which has three seasons streaming on Netflix.

Comic Bret Ernst may have spent a good amount of time living in Florida, but he grew up in Passaic, and his Jersey Italian roots show through in just about every way, from his accent to his look to his tough guy-meets-goofball persona. On top of that, his jokes are rooted in storytelling, which gives the audience in front of him an inside look at what the life of a typical North Jersey Italian kid was like in the 1980s. And with that character so ingrained in his act, it’s no surprise that in 2018, Ernst — who comes to Atlantic City for a trio of shows at the Celebrity Theater at Claridge Hotel 8 p.m. Friday, Jan. 29, and 6 and 8 p.m. Saturday, Jan. 30 — would be cast to play Louie LaRusso Jr., cousin to Newark-born bully-magnet Daniel LaRusso in Netflix’s smash hit series “Cobra Kai,” which just has its third season premiere on Jan. 1.

Atlantic City Weekly: When did you realize you were funny enough to be a comedian?

Bret Ernst: I was always the guy cracking people up in the locker room and at the back of the bus as a kid, and then I saw Eddie Murphy’s “Delirious” when I was really too young to be seeing it, and from then on I knew comedy was something I wanted to do. So it was always in the back of my head.

ACW: It seems like Eddie Murphy’s stand-up films are to younger comedians what Carlin and Pryor’s were to the generation before.

BE: Yeah, and to me those are two of the greatest stand-up performances of all time. Even though I didn’t realize back then how much he borrowed from Pryor. But Eddie was so beyond talented. I’d say he is one of the most talented performers in entertainment history.

ACW: How do you come up with your material?

ACW: When some comedians talk about the writing process, they often focus on dissecting and analyzing every syllable and beat of a particular joke. You seem to have more of a freeflow style.

BE: Yeah, but sometimes I will deliver a joke in different ways. It’s always a work in progress. Sometimes I’ll go over the top and see if there’s something there, sometimes I play it nicer or play it angry or silly. It just depends. For me a lot of it is about instinct. I write on stage, I don’t write on paper at all.

ACW: You play Louie LaRusso Jr. on Cobra Kai – were you a big fan of “The Karate Kid” growing up?

BE: Absolutely. Being from Jersey and then moving to Florida and being raised by a single mom – there were some real similarities there for me. But really, every Gen Xer loved that movie.

ACW: The show has blown up and become a huge hit. Did you or anybody in the cast and crew have any idea that it would get this big?

BE: When we started the show was only available on YouTube Premium. Netflix came later. So in the beginning when we shot it we knew how good it was, and I knew how much fun I was having, but we had no idea it was going to be like this as far as its success. You can never anticipate that. I think at one point recently we were the No. 1 show in the world.

ACW: The show has bits of humor in it, but it still feels like you are watching a continuation of “The Karate Kid.” They got the tone right.

BE: That’s a really good point. There are some really great writers behind it. And those guys – although they are comedy writers – they are legitimate fans of the movie. I have been on plenty of sets, and if there is even one level of toxicity, whether it’s from a writer, one of the stars, the producer … it can really ruin a set. But everybody on the set of “Cobra Kai” is really just having so much fun. And I’m not just saying that! (laughs)

ACW: Who is the real villain – Johnny or Daniel?

BE: I would say Louie! (laughs). What I love about the way they wrote the show is that you are kind of rooting for everyone, and you are also kind of not, which I think is more realistic and closer to real life. I remember when I was growing up, there were these kids from another town that we would always get in fights with when we would see them out. And I remember my little brother made a point one time and said, “You know, if we went to school with them, those guys would be our friends.”

ACW: “Cobra Kai” has been picked up for a fourth season. Are you filming now and is there anything you can tell us about it?

BE: It looks like we are going to begin filming in mid-February, so that’s what I have to keep open timewise, but we haven’t gotten any scripts yet or anything.

ACW: If you could only pick one – would you choose Daniel’s 1948 Ford Super De Luxe convertible or Johnny’s 2019 Cobra Kai Challenger?

Why Louie matters (spoilers ahead)

In Cobra Kai, Ernst’s character of Louie LaRusso Jr. originally seems like little more than an impulsive, juvenile prankster, hired out of pity by his successful cousin Daniel to work as a salesman at his car dealership in Los Angeles. And in Season 1, Louie definitely makes for some comic relief as he plays pranks on Daniel’s student/employee Robby Keene, at one point convincing him to drive a Porsche on the showroom floor at LaRusso Auto. Louie also manages to take things too far, ultimately getting himself fired after hiring a group of biker buddies to torch Johnny Lawrence’s car as revenge for opening the Cobra Kai dojo.

But just when you thought Louie was never to be seen again, Ernst’s character ends up being crucial to the plot of Season 3, when he plays a key role in tracking down Keene, who has gone missing after being involved in a fight that led to the hospitalization of Miguel, Lawrence’s top student at Cobra Kai. Louie manages to redeem himself, getting re-hired at LaRusso Auto, and according to Ernst, the character is set to return in Season 4. The only question is, after being given a second chance, will Louie return to his old ways? Time will tell.

For anyone who needs solid proof that dreams can come true - here it is.

5 reasons to see Kiss The Sky at the Landis Theater

Kiss The Sky, a tribute act focusing on the late great Jimi Hendrix, will head to the Landis Theater in Vineland on Saturday, Feb. 20, for one…

Tribute band Bark at the Moon comes to Landis Theater

Ozzy Osbourne has had an interesting career path. During his heyday in the ’70s and ’80s he was painted as a scary heavy metal madman, best kn…

If there is any more proof needed that following your passion is always the right move, Brooklyn-born comedian Chris Distefano — who comes to …

Looking to be front and center at the Trump Plaza demolition on Wednesday, Feb. 17? Caesars Atlantic City will offer a $299 stay-and-view room…

Welcome to the Pisces season filled with water … the strongest element of all. This is time of transformation from Ice to water to most to wat…

For the second year in a row, Somers Point's annual Bayfest, which takes place in late April and is one of the town's most popular events, has…

Much of Ernst’s act is done off the cuff in a free flowing, storyteller style. ‘For me a lot of it is about instinct. I write a lot on stage,’ he says.

Louie LaRusso Jr. finds himself in all kinds of trouble in ‘Cobra Kai,’ which has three seasons streaming on Netflix.