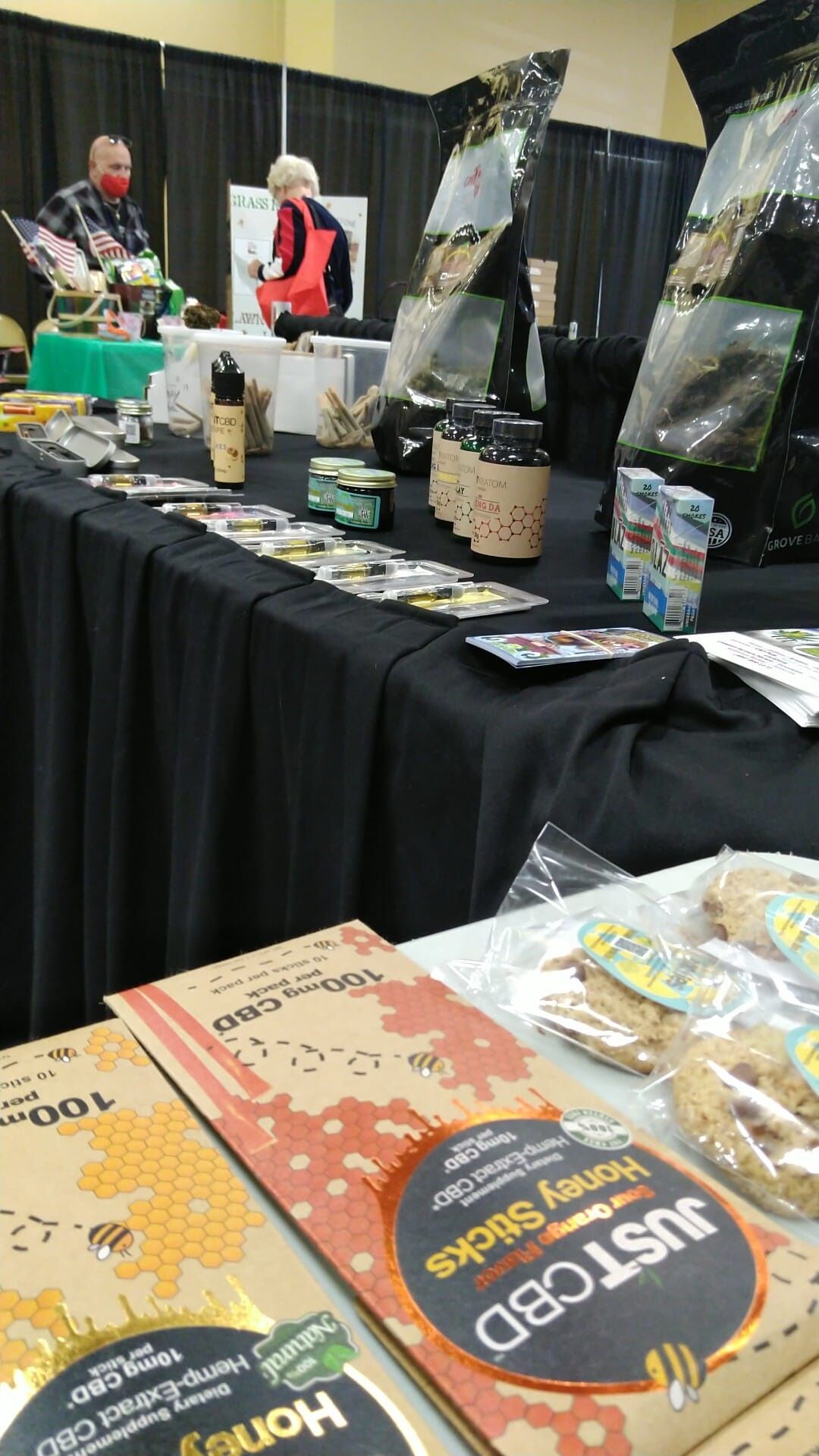 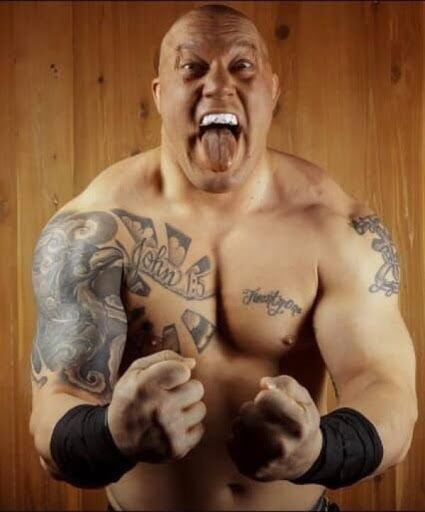 Pro wrestler Justin Kyle will take on Phil Baroni in the main event on the first night of the fest. 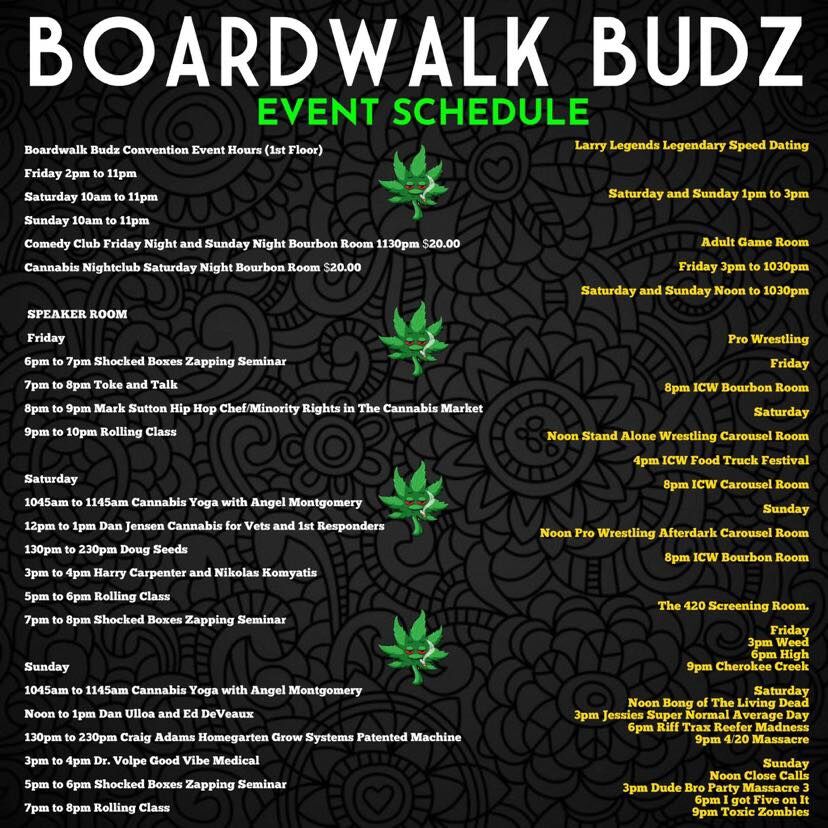 There was a time not so long ago when even mentioning that you smoked weed was very much taboo. Being a pot smoker might get you arrested, or at the very least, deemed a “bad influence” by your friend’s mom.

While there is still a chance that your friend’s mom doesn’t want her son or daughter to hang out with you, these days the reason for that is far more likely to be due to your questionable integrity and obvious character flaws than anything marijuana-related. Why? Because, over the last few years, weed has suddenly become — Gasp! — accepted.

And that new stance is not just a vague feeling in the air: The people of New Jersey unequivocally declared their acceptance of pot by recently voting to legalize it. So it’s safe to say that what was once considered an evil vice is now all but completely normalized.

And that’s why events like Boardwalk Budz — a weed-based festival that comes to Showboat Hotel in Atlantic City Friday to Sunday, June 25 to 27 — are now able to take place in South Jersey without anyone clutching their pearls too tightly.

What Is It? “Boardwalk Budz is an idea I came up with a few years ago, which I based on some other similar concepts I had seen around the country,” says Chad Minnes, the creator and brains behind Boardwalk Budz. “I wanted to expand upon what other events were doing and make this festival friendly to both cannabis consumers and non-consumers as well.”

Though the idea for the festival had been in Minnes’ head for a number of years, it wasn’t until the recent changes in the laws regarding marijuana in New Jersey that he decided to put the wheels in motion. And when he did, things quickly started to grow — like a weed.

“It grew from a small convention to a large-scale cannabis lifestyle event,” Minnes says.

And when he says large scale, he really means it. Boardwalk Budz will run over the course of three days and will feature a large variety of vendors selling anything and everything from t-shirts to hemp bracelets to smoking vessels to CBD gummies and anything else that a pot smoker could possibly dream up. But the beauty of this event is that it’s so much more than that. There will be everything from guest speakers to live music, comedy, speed dating, food trucks and even pro wrestling.

The Entertainment The smell of pot smoke wafting through the air at any concert is all but guaranteed, so naturally it makes sense for there to be live music at Boardwalk Budz. And Minnes made sure to feature bands that fit the vibe perfectly.

“We will have over 30 music acts throughout the weekend. We wanted to do a mix of something for everybody,” he says.

Highlights among the array of acts will be Boardwalk Saints, Ill Rendition, Peezy, and two tribute bands: Jah People, an homage to Bob Marley who will perform 7 p.m. Friday in the food truck area; and Dead Reckoning, a Grateful Dead act that will take the stage 8 p.m. Saturday at the Bourbon Room.

There will also be stand-up comedy starting at 11:30 p.m. Friday and Saturday in the Bourbon Room. Comics set to perform include Laura High, Kevin Garifo, Tony Watson and Biranna Bennozich.

Never quite mastered how to roll up a fatty? Boardwalk Budz will feature seminars on joint rolling, cannabis yoga, toke-and-talk sessions and speakers focusing on the medicinal uses of pot and more. Wanna sing to boost your buzz? Kronick Karaoke will be running all weekend long at the fest. Looking to get a little silly with an adult board game? There will be an adult game room for those 21 and over featuring such kid-unfriendly titles as Trailer Park Boys Opoly, You’ve Got Crabs and Bob Marley’s game of Peace, Love and Unity.

And if none of that seems up your alley, there is always pro wrestling.

Each day, there will be wrestling events from different promotions that will feature a variety of exciting matches — both women and men — including an ICW main event bout 8 p.m. Friday between Phil Baroni and Justin Kyle.

Both the evening comedy and wrestling shows require an additional ticket purchase of $20 each.

A Smokin’ Hot Date Looking to meet a like-minded toker? Love is in the air at Boardwalk Budz in the form of speed dating. For anyone unfamiliar with the concept, speed dating is where you sit at a table with a random stranger and attempt to get to know them — for 3 minutes. After the 3 minutes is up, you switch to the next person for another 3 minutes and continue until the round is over. At the end, if you make a connection that you wish to pursue further, you can choose to do so.

The Munchies With weed as the main focus of the weekend, there is a strong chance that most — if not all — attending will end up with a bad case of the munchies at some point. Luckily, the festival has you covered, with an array of tasty food trucks to choose from, including local faves like Chef Sheed’s BBQ Shack and Twisted Steaks, a truck that serves it’s incredible lineup of cheesesteaks on hand-twisted artisan pretzels.

The Buzz QuestionAs much as the individual events of Boardwalk Budz all sound like a lot of fun, the obvious question on the minds of everyone thinking of attending is the same: Will you actually be able to smoke marijuana at Boardwalk Budz? The answer is appropriately hazy.

“We have a section squared off called The Smoke Deck, so we will be the first to try that. But I don’t know how that will go, to be honest, because the laws are still (very unclear). So we’re going to try it and see what happens. We already know people smoke on the boardwalk and stuff like that, so we are going to do a little trial and error on that one,” Minnes says.

The Rundown Thinking of heading down to Boardwalk Budz? Here is the complete schedule:

When: Friday to Sunday, June 25 to 27 (See sidebar for full schedule)

On any given week, Atlantic City features just about every possible type of entertainment there is. Concerts, comedy shows, live revues and DJ…

Pro wrestler Justin Kyle will take on Phil Baroni in the main event on the first night of the fest.