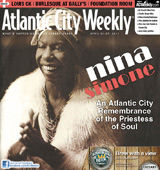 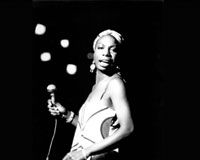 Atlantic City has always been an entertainment town. All the stars — from the Rat Pack to Sam Cooke to the Beatles and Madonna — played Atlantic City, and that’s just a tiny fraction of all the stars who played the resort over the past 150 years. In fact, the entire Jersey shore has played a crucial role in the evolution of modern music and there are so many stories, some that have been told over and over again and some still waiting to be told, that illuminate what an entertainment mecca the southern New Jersey region has been throughout its vibrant history.

From Bill Haley and the Comets playing early on in Wildwood to Bob Dylan finding his electric band The Hawks (later The Band) as they were playing a summer stint in the one-time Somers Point hot spot Tony Mart’s, to the story of a 21-year-old woman from North Carolina by the name of Eunice Waymon who came to Atlantic City in 1954.

Waymon was brought up in a family of eight children and was drawn to the piano. She studied classical music, practicing constantly, and taking lessons. She would eventually go on to study at New York’s Julliard School of Music — a rare chance for an African-American woman in the early 1950s.

After a short time in New York, Waymon set her sights on Philadelphia where she auditioned for the prestigious Curtis Institute of Music. She didn’t get in and blamed racism as the culprit, but it didn’t deter her from chasing her dream to become a classical pianist, and she vowed to practice and re-audition at Curtis.

Waymon set up shop in Philadelphia — at a storefront at 57th Street and Master, according to her 1991 autobiography — where she gave piano lessons to students of different ages, attended church and was alone a lot of the time.

“Mostly I was on my own,” she writes, “working hard, practicing, isolating myself. ... I lived like this for nearly three years, trying to save enough money to stop working and dedicate myself to music and not getting anywhere near it.”

Waymon, as her mother encouraged her along the way, was going to be the “world’s first black classical concert pianist.”

Several of the people she met in Philadelphia talked about how they spent the summer in Atlantic City, including some of her students.

Some of those students — mainly the ones of college age — told Waymon that they had jobs in Atlantic City over the summer months, and one student of hers was set to play piano at a hotel lounge making “ninety dollars a week.”

That one bit of information changed the course of American music and gave the world one of the greatest singers of all time, later known as the High Priestess of Soul, Nina Simone.

In her enlightening 1991 autobiography I Put a Spell On You, penned with Stephen Cleary, Simone writes about the origins of the name Nina Simone and why she first started to sing — something she hadn’t done before — in Atlantic City in June 1954.

“Ninety dollars was double what I earned and that was just what the bar paid,” she writes in the book. “If customers liked you there were tips on top.”

Simone got the number of her student’s agent and called him up. “I wasn’t nervous,” she writes, “figuring if one of my students could get a job as a pianist, so could I. Sure enough the guy called back and told me I had a job for the summer, at a place called the Midtown Bar and Grill.”

The only problem was the chance that her mother might find out she was playing in a bar. (“To her that wouldn’t be any different from working in the fires of hell,” she writes.) So, she changed her first name to Nina (the name an old boyfriend Chico used to call her) and her last name to Simone, a tribute to French film star Simone Signoret. And when summer came, she “left Philly as Eunice Waymon and arrived in Atlantic City as Nina Simone.”

She had never been in a bar, nor had she ever sang before, but both were required for her summer gig at the Midtown, located at 1719 Pacific Avenue, between Indiana and MLK Blvd., and just “two blocks back from the seafront boardwalk,” she recalls in her book.

Simone describes the place as being a “seedy little bar where old guys go to huddle over a drink and fall asleep.” It could hold about 100 patrons and featured a long, skinny bar area as well as a back room with sawdust on the floor for drunks to “sleep it off.”

She tried not to let the smoke bother her eyes, drank milk, and performed for the first time as Nina Simone on an “OK” piano, which sat beneath a dripping air conditioner. The owner of the bar, “a little Jewish guy [with] a fat cigar in his mouth” named Harry Steward, positioned an umbrella beneath it to keep Simone and the piano dry.

1954 was the city’s centennial and Paul Whiteman was broadcasting his ABC TV show from A.C. that summer. The first ad mentioning “Nina Simone” appeared in the Wednesday, June 1, 1955 edition of the Atlantic City Press.

Simone played from 9pm to 4am every night. Three years before she would earn her first record contract, which would eventually solidify her career in entertainment for the next 50 years, Simone weaved classical pieces, hymns and gospel songs into her repertoire, with most songs lasting “anywhere between 30 and 90 minutes,” she recalls in her book.

“On my first night,” writes Simone, on which she was dressed in her “best long chiffon gown,” with her hair and make-up fixed as if she was performing at the Metropolitan Opera, “one song I played lasted three hours without a break.”

By the time 4am came around that first night as Nina Simone, Steward seemed very pleased with her playing, but asked her why she didn’t sing at all.

“I’m only a pianist,” she told him, after which, as Simone describes in her book, the bar owner “took his cigar out of his mouth [and said]: “Well, tomorrow night you’re either a singer or you’re out of a job.”

Eventually, all the improvising she had to do during her seven-hour shows, including working in her singing, and learning new songs, primed her for her extraordinary career as a genre-breaking entertainer well-versed in gospel, standards, folk tunes, jazz, blues and soul and beloved around the world.

Kenny Hill got out of the Army in 1953. The following year he was working a night shift at a nearby hotel-resort. “At that particular time, I worked at Haddon Hall, which is now Resorts,” says Hill, 78, and a current member of the Atlantic City Planning Board. “And I used to get off at midnight. Walking home I would come down Pacific Avenue and [one night] the door was open at this bar and I heard this music coming and I said let me stop in here and [Nina Simone] was there. And she played different and she sang different from anyone I ever heard before.

“She was more or less a classical pianist who had this unusual voice. I started going in there for the rest of the summer and we got to be friendly. I’d spend about two hours every night [at the Midtown listening to Simone] and I’d walk her home every night. She had an apartment on North New York Avenue.”

Hill recalls that Simone and the piano were positioned about halfway between the entrance and the back end of the bar. “She played in the center, by herself,” Hill recalls “And it was a small area for the piano — and she faced the people.”

Hill adds: “The people loved her in there,” he says of the Midtown. “And they had regulars who went in there. There wasn’t a lot of summer action in there. It was never too crowded. I never saw the place jammed, but they kept her for the summer.

“She always looked presentable on the stage. You know, she wore long gowns or a long skirt — evening attire. She played formally and she sang formally.”

During the day, Hill surmises that Simone mostly rested up for the night’s show, sometimes going to the beach at Missouri Avenue, dubbed “Chicken Bone Beach,” a segregated beach, which was the only stretch of Atlantic City shoreline for decades where African-American’s could go.

And they did, including all the black performers in town for a summer gig or residency. Along with Simone, everybody from Billie Holiday to Sammy Davis Jr. to Martin Luther King Jr. hung out at Chicken Bone Beach.

After moving back to Philadelphia, Simone and Hill would meet up and continue their friendship as Hill moved to Philly as well following the close of the summer of 1954.

Simone's family had moved to Philly as well, and they saw that the young musician had been transformed. Given the taste of the limelight, she wanted more. And after a few months back in Philly, she decided to try her luck with a career as a singer-pianist.

As the online “Nina Simone Timeline Database” includes, “From then on, Nina quickly gravitated to fame. Her records hit the best-seller lists, bookings poured in, and the entertainment world hailed her as one of the greatest musical finds of all time.”

Simone returned to Atlantic City to perform at the Midtown the next June. Three years later she’d have a Top 20 hit with “I Loves You, Porgy,” recorded for the Bethlehem label.

Ironically it would be her only Top 40 hit. But that’s not what Simone was about. She was, perhaps due to those summers in Atlantic City, more comfortable in lounges and nightclubs around the globe rather than the pop charts. She made music for adults, not teeny-boppers, and as the All-Music Guide includes in her bio, the nine albums she would record in the early 1960s, half of them live albums, “unveiled her as a performer of nearly unsurpassed eclecticism, encompassing everything from Ellingtonian jazz and Israeli folk songs to spirituals and movie themes.”

Hill recalls that Simone, who died April 21, 2003, was a “spirited woman. She wasn’t a diva —  she became a diva — but she treated her clients in the bar fine.”

By 1958, Nina Simone was married in Philadelphia and on her way to stardom with appearances on The Ed Sullivan Show (May 8, 1960); a concert series in Nigeria with jazz pianist Randy Weston and the writers James Baldwin and Langston Hughes (December 1961); a string of excellent records and a full-fledged recording artist.

Simone would eventually become involved in the Civil Rights Movement in the American mid-1960s; move to locations around the world such as Switzerland, France and Holland; and get lifetime achievement awards from across the globe.

Her daughter, Simone, is a recording and touring artist carrying on the tradition of her courageous, genius and extremely talented mother.

Simone’s story is another amazing and important slice of the Jersey shore’s — and in this case, Atlantic City’s —  hefty role in the evolution of modern American music. Google her and pick up some of her albums.

Aside from her 2001 autobiography, the biography Princess Noire: The Tumultuous Reign of Nina Simone by Nadine Cohodas is also worth checking out.

Black Is the Color of My True Love's Hair

House of the Rising Sun

I Got It Bad (And That Ain'tGood)

I Loves You, Porgy

I Put a Spell on You

I Want a Little Sugar in My Bowl

My Baby Just Cares for Me

I Wish I Knew How It Would Feel to Be Free

Take Me to the Water

To Be Young, Gifted and Black

Since I Fell For You

Ain't Got No, I Got Life

Don't Let Me Be Misunderstood